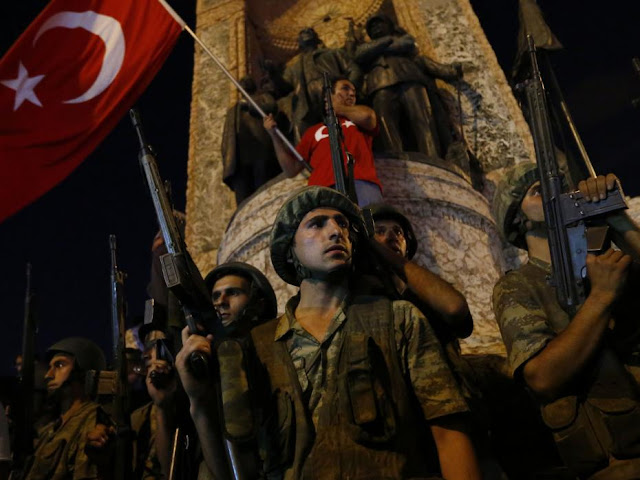 Turkish soldiers, pictured during the failed coup in Turkey last night Murad Sezer/Reuters
Recep Tayyip Erdogan had it coming. The Turkish army was never going to remain compliant while the man who would recreate the Ottoman Empire turned his neighbours into enemies and his country into a mockery of itself. But it would be a grave mistake to assume two things: that the putting down of a military coup is a momentary matter after which the Turkish army will remain obedient to its sultan; and to regard at least 161 deaths and more than 2,839 detained in isolation from the collapse of the nation-states of the Middle East.

For the weekend’s events in Istanbul and Ankara are intimately related to the breakdown of frontiers and state-belief – the assumption that Middle East nations have permanent institutions and borders – that has inflicted such wounds across Iraq, Syria, Egypt and other countries in the Arab world. Instability is now as contagious as corruption in the region, especially among its potentates and dictators, a class of autocrat of which Erdogan has been a member ever since he changed the constitution for his own benefit and restarted his wicked conflict with the Kurds.

Needless to say, Washington’s first reaction was instructive. Turks must support their “democratically elected government”. The “democracy” bit was rather hard to swallow; even more painful to recall, however, was the very same government’s reaction to the overthrow of Mohamed Morsi’s “democratically elected” government in Egypt in 2013 – when Washington very definitely did not ask Egypt’s people to support Morsi and quickly gave its support to a military coup far more bloody than the attempted putsch in Turkey. Had the Turkish army been successful, be sure Erdogan would have been treated as dismissively as the unfortunate Morsi.

But what do you expect when Western nations prefer stability to freedom and dignity? That’s why they are prepared to accept Iran’s troops and loyal Iraqi militiaman joining in the battle against Isis – as well as the poor 700 missing Sunnis who “disappeared” after the recapture of Fallujah – and that’s why the “Assad must go” routine has been quietly dropped. Now that Bashar al-Assad has outlived David Cameron’s premiership – and will almost certainly outlast Obama’s presidency – the regime in Damascus will look with wondering eyes at the events in Turkey this weekend.

The victorious powers in the First World War destroyed the Ottoman Empire – which was one of the purposes of the 1914-18 conflict after the Sublime Porte made the fatal mistake of siding with Germany – and the ruins of that empire were then chopped into bits by the Allies and handed over to brutal kings, vicious colonels and dictators galore. Erdogan and the bulk of the army which has decided to maintain him in power – for now – fit into this same matrix of broken states.

The warning signs were there for Erdogan – and the West – to see, if only they had recalled the experience of Pakistan. Shamelessly used by the Americans to funnel missiles, guns and cash to the “mujahedin” who were fighting the Russians, Pakistan – another “bit” chopped off an empire (the Indian one) turned into a failed state, its cities torn apart with massive bombs, its own corrupt army and intelligence service cooperating with Russia’s enemies – including the Taliban – and then infiltrated by Islamists who would eventually threaten the state itself.

When Turkey began playing the same role for the US in Syria – sending weapons to the insurgents, its corrupt intelligence service cooperating with the Islamists, fighting the state power in Syria – it, too, took the path of a failed state, its cities torn apart by massive bombs, its countryside infiltrated by the Islamists. The only difference is that Turkey also relaunched a war on its Kurds in the south-east of the country where parts of Diyabakir are now as devastated as large areas of Homs or Aleppo. Too late did Erdogan realise the cost of the role he had chosen for his country. It’s one thing to say sorry to Putin and patch up relations with Benjamin Netanyahu; but when you can no longer trust your army, there are more serious matters to concentrate on.

Two thousand or so arrests are quite a coup for Erdogan – rather larger, in fact, than the coup the army planned for him. But they must be just a few of the thousands of men in the Turkish officer corps who believe the Sultan of Istanbul is destroying his country. It’s not just a case of reckoning the degree of horror which Nato and the EU will have felt at these events. The real question will be the degree to which his (momentary) success will embolden Erdogan to undertake more trials, imprison more journalists, close down more newspapers, kill more Kurds and, for that matter, go on denying the 1915 Armenian genocide.

For outsiders, it’s sometimes difficult to understand the degree of fear and almost racist disgust with which Turkey regards any form of Kurdish militancy; America, Russia, Europe – the West in general – has so desomaticised the word “terrorist” that we fail to comprehend the extent to which Turks call the Kurds “terrorists” and see them as a danger to the very existence of the Turkish state; which is just how they saw the Armenians in the First World War. Mustafa Kemal Ataturk may have been a good old secular autocrat admired even by Adolf Hitler, but his struggle to unify Turkey was caused by the very factions which have always haunted the Turkish heartland – along with dark (and rational) suspicions about the plotting of Western powers against the state.

All in all, then, a far more dramatic series of events have taken place in Turkey this weekend than may at first appear. From the frontier of the EU, through Turkey and Syria and Iraq and large parts of Egypt’s Sinai Peninsula and on to Libya and – dare one mention this after Nice? – Tunisia, there is now a trail of anarchy and failed states. Sir Mark Sykes and François Georges-Picot began the Ottoman Empire’s dismemberment – with help from Arthur Balfour -- but it continues to this day.

In this grim historical framework must we view the coup-that-wasn’t in Ankara. Stand by for another one in the months or years to come.
 by Robert Fisk, independent.co.uk
Comments:
Erdogan must not be revengful, slowly take all on board for common agenda of unity, Peace and progress ... Gulen, Military & opponents... freedom of press ... don't try to be Sultan. Restore honour of military... which hashould to fight terrorism. A demoralised military will not be able to sustain democracy..
Related: