Massacre of Muslims in Assam India

Dozens have been killed and tens of thousands more displaced as violence breaks out in India's northeastern Assam state.

"The central government pumps in money for economic progress and military but there is a total disregard to the history of the northeast… The root cause remains that there has been unchecked infiltration over the years and a change in the demographics of the region."

Indian security forces are patrolling the streets in the state after days of rioting, with thousands of soldiers sent to secure the region after clashes between Bodo tribesmen and Muslim settlers.
Authorities have ordered security forces to shoot on sight, but the state police chief denies that such an order was given.
The fighting has left at least 40 people dead. Residents say the troops have come too late.
Surrounded by China, Myanmar, Bangladesh and Bhutan, Assam is home to more than 200 ethnic and tribal groups. Muslim Bangladeshis make up most of the immigrants.

The latest wave of violence was sparked on Friday night when unidentified men killed four youths in Kokrajhar, a Bodo tribe-dominated district near the borders of Bangladesh and Bhutan.

"The problem between the Bodos and other communities over land and natural resources is a continuing issue that has been going on for the last 100 years… Unless the government of India finds a political solution to this problem, this will continue."

Violence has now spread to Chirang and Baska districts. More than 170,000 people have fled their homes for relief camps.

The Bodo community however told Al Jazeera's Prerna Suri that it is only protecting its people.
Anjali Daimary, of the Bodo Women's Justice Group, said: "It is for us to ask the question [of] how much we are safe in our own land. This is an example that the government of India, what we expect, what we deserve we are never given, we are never given the same status as other people."

Inside Story asks: Can a security solution work despite past failures? And what is required of the Indian government to settle this issue once and for all?

Joining the discussion with presenter Nick Clark are guests: Suhas Chakma, the director of the Asian Centre for Human Rights (ACHR); Namrata Goswami, a research fellow at the Institute for Defence Studies and Analyses (IDSA); and Shisir Basumatari, a native Bodo, an artist and a writer.

"What policy makers in Delhi are worrying about is how to bring the violence down and ensure that it does not escalate…there are more districts [facing] armed violence and it could become a problem that could be completely unmanageable."

TIMELINE OF THE ASSAM CONFLICT: 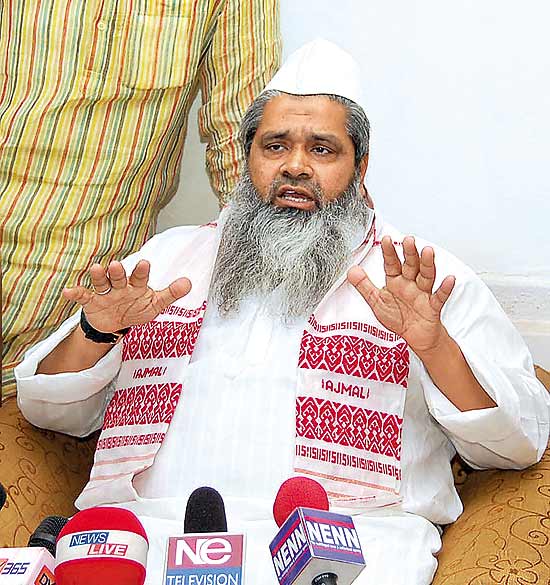 Badruddin Ajmal is Assam’s tallest Muslim leader. S.N.M. Abdi talks to the Dhubri MP and president of the All India United Democratic Front (AIUDF), the state’s principal opposition party, about casualties and the efficacy of relief operations.
The official death toll is 56. What is your figure?
There are hundreds of corpses rotting in remote areas where well-planned cleansing drives were executed with the blessings of the administration. A proper headcount of the dead or missing will take a very long time.
Any idea of the Bodo/Muslim break-up of casualties?
Ninety per cent of those killed are Muslims. If I even attempt an estimate of the factual toll, I’ll be accused of making provocative statements and obstructing the return of normalcy. So I don’t want to go public with the information collected by my party. But I’ll open my mouth after the government comes up with its final death toll.
Your party has accused the state of turning a blind eye to the massacre of Muslims. It’s a very serious charge.
Tarun Gogoi has betrayed those he is constitutionally bound to protect. He is not only the CM but also the home minister. So he has no excuses. It’s now as clear as daylight that the CM had advance information of preparations to kill Muslims. But he did not act. Now he is transferring DCs, SPs, SDOs, SDPOs and officers-in-charge. FIRs should be immediately filed against the guilty officials and they must be tried. If the CM has a conscience, he should resign. He’s solely responsible.
Why demand a CBI inquiry?
Because Muslims have no faith in the state government. The PM is an MP from Assam. He must order an impartial, independent investigation instead of being misguided and misinformed by the CM who has much to hide.
Are you satisfied with the pace of relief and rehabilitation measures?
The whole exercise is a farce. Even the victims of the 1993 violence are yet to be rehabilitated. India has no idea of what’s going on in Assam.
There are reports that infiltrating Bangladeshis instigated the current flare-up.
These are cock-and-bull stories spun by the BJP. R.K. Singh, the union home secretary, shot down these conspiracy theories no sooner than they were aired. Anyone propagating that Bangladeshis infiltrated India and ignited trouble is insulting our armed forces guarding the country’s international border. These are patently anti-national theories to shield the guilty; they have nothing to do with reality.
http://www.outlookindia.com/article.aspx?281843
~~~~~~~~~~~~~~~~~~~~~~~~~~~~~~~~~~~~~~~

What lies behind Assam violence? 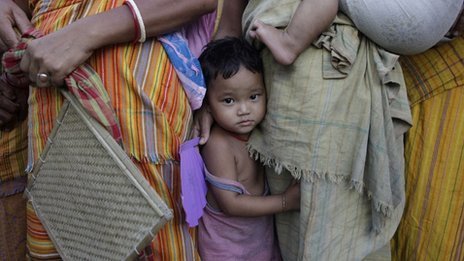 India's north-eastern state of Assam is a veritable tinder-box. So why does it periodically erupt into violence and blood-letting?
The latest bout has left about 40 dead and displaced tens of thousands. The state remains tense as the army has been issued with "shoot on sight" orders.
At the heart of Assam's troubles is a debate over so-called "infiltration" by outsiders, which has led to ethnic tension between the state's indigenous population and Bengali migrants.
Changing demography, loss of land and livelihood and intensified competition for political power has added a deadly potency to the issue of who has a right to Assam.
'Infiltration' anger

The migrants say they are mostly descended from East Bengali Muslims brought to Assam by the British to boost agricultural output by taming the "Chars" (river islands) - and that they are as Indian as the ethnic Assamese or the tribespeople in the state.

But the others do not accept that argument and groups representing them say more and more poor peasants from Bangladesh are flooding Assam, taking advantage of a porous riverine border.
The worst violence prompted by such tensions erupted during a controversial election in February 1983 - nearly 3,000 people were left dead in that episode.
The indigenous Assamese were joined by many local tribal groups in opposing the state assembly elections because they alleged that the electoral rolls were full of "infiltrators" - the expression locally used to describe illegal migrants from neighbouring Bangladesh.
It came after four years of a determined campaign to drive out the migrants, hundreds of whom were killed in the village of Nellie in central Assam that February.
Continue reading the main story

After the 1983 elections, India's federal government tried to placate local sentiments by signing an accord with the All Assam Students Union (AASU) in 1985 which was leading the campaign against the migrants.
The accord promised to disenfranchise migrants who came after 1966 for a period of 10 years, after which they would be included in electoral rolls.
The hardline Assamese described the 1985 accord as a "betrayal" and decided to wage an armed campaign against India.
Twenty years later, a faction of the separatist United Liberation Front of Assam (Ulfa) is negotiating with Delhi, asking for more concrete protection for indigenous populations against what they describe as "relentless illegal migration from across the border".
Groups representing Bodo, Rabha, Tiwa and other tribespeople support the Ulfa's call for stopping illegal migration and protecting the lands and livelihoods of the local populations.
Delhi has reportedly promised a replay of the 1985 Assam accord - disenfranchisement of the migrants who came between 1966 and 1971 for a period of 10 years, but not much more.
The latest clashes have affected four districts of western Assam, where the migrants - or their descendants from East Bengal (now Bangladesh) - are pitted against tribespeople such as the Bodos, Rabhas and Garos.
Bodo-Muslim tension

In Kokrajhar, the Bodo heartland, Muslim migrants are regularly attacked by Bodo separatist rebels and this periodically erupts into full-scale riots.
More than 100 migrants were killed in one such raid at Bansbari, a makeshift camp for displaced Muslims in 1993.
The Bodos now have an autonomous territorial council which one of their parties, the Bodoland People's Front (BPF), controls. But many feel migrants have taken over much of the land they traditionally occupied.
The migrants and their descendants have also become more assertive with the formation of the Assam United Democratic Front which seeks to protect the rights of minorities and their periodic ousting from settlements through violence.
The Front, led by a charismatic religious leader Maulana Badruddin Ajmal, has increased its tally in the state legislature over the last two state elections.
In 2011, it emerged as the main opposition to Assam's ruling Congress party, winning three times the number of seats won by regional Assamese parties and the Hindu nationalist BJP.
Four years ago, different local tribes people and ethnic Assamese were involved in bitter rioting in the district of Darrang, in which the army had to be called out to stop the blood-letting.
Trouble in Assam is not simply a regional issue - the violence has also affected railway traffic between India's mainland and its north-eastern states because violence-torn Kokrajhar district sits in the "chicken neck", the strategically vital corridor that connects the north-east to the rest of the country.
Subir Bhaumik is an independent journalist and writer based in Calcutta
http://www.bbc.co.uk/news/world-asia-india-18993905
Comments:
Muslims are being killed in Burma, India. Kashmir, Palestine, Chechenia, Afghanistan, FATA Pakistan by US Drones and elsewhere. World is silent....  when they rise up to defend themselves will be called terrorists ....
Visit: http://freebookpark.blogspot.com