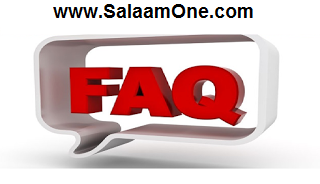 Question#1: What is the purpose of PFN (Peace Forum Network)?
Question#2: Who are the main addresses of PFN?
Anyone from any race, gender or faith, all peace loving people of the world can benefit from PFN.
Question#3: Do you accept donations?
The donations are not accepted, everyone is free to copy or reproduce the work and distribute among his/her circles freely.

Question#4: Who funds PFN?
It is wholly financed and managed by Aftab Khan. Being a web based Network, the expenditure in maintaining PFN is within limits, all expenses including, printing of book and articles, distribution including free home delivery are accepted as an obligation and service to humanity. PFN is no profit, non commercial enterprise with large number of hits/visits, but it is not capitalized to raise any funds through advertisements. PFN does not monetize. The advertisements by Google, Wordpress and other Web hosts are beyond the the control of PFN Admin.

Question#6: What is your qualification?
I hold Masters in Political Science, Business Administration and Strategic Studies.
Question#7: Are you qualified to discuss religious matters?
Broadly, the Islamic knowledge has main fields like: Seerah (life of Prophet, pbhu), Hadith, Islamic Law - Shari'ah (Fiqh), History, Comparative Religion and Tafseer Quran. Anyone can study the books by renowned and reputed scholars to grasp the essentials. However to become a Khateeb, Mufti, Faqeeh, Muhadis or Mufasir one has to get formal education in Madaris and Darul Alooms. At PFN only general topics of interest are touched upon with references and quotations from Quran, Hadith and work of renowned established scholars. This needs extensive study and research which is not lacking in spirit. No Fatwa or edicts are promulgated. (Interestingly while discussing politics, no one asks Molanas about their qualifications and expertise in this field). Every Muslim has five obligations to Quran: (i) Believe, (ii) Read, (iii) Understand,(iv) Act upon teachings and (v) Convey to others. Anyone can easily meet these five obligations according to his/her level of education, understanding and effort.
Question#8: What is your sect or Maslik?
I prefer to be known as Muslim, the name given by Quran (Al Maidah 5:3). Moreover: “…and be not amongst those who join gods with Allah, those who split up their Religion, and become sects - each party rejoicing in that which is with itself.” (Quran, 30:31-32),  "And do not die except as a Muslim." (Qur'an 3:101)
Question#9: The Muslims follow different Fiqh (jurisprudence) schools; Your views?
The commandment of Prophet Muhammad (pbuh) about unity of Muslim community is repeated in many Hadith, some are quoted here:
Allah’s Apostle said, “Whoever prays like us and faces our Qibla and eats our slaughtered animals is a Muslim and is under Allah’s and His Apostle’s protection. So do not betray Allah by betraying those who are in His protection.” (Narrated Anas bin Malik, Volume 1, Book 8, Number 386:Sahih Bukhari). Ibn Abbas (Allah be pleased with him) reported the Prophet (Peace be upon him) as saying: "...... one who separated from the main body of the Muslims even to the extent of a handspan and then he died, would die the death of one belonging to the days of Jahiliyya." (Sahih Muslim, 3/4559 & Sahih al-Bukhari, 9/257, similar Hadith Mishkat-ul-Masabih, 1/185 & Sunan Abu Dawood, 3/4740). Hazrat Ali (R.A) said; “... The best man with regard to me is he who is on the middle course. So be with him and be with the great majority of Muslims because Allah’s hand of protection is on keeping unity. You should beware of division because the one isolated from the group is a prey to Satan just as the one isolated from the flock of sheep is a prey to the wolf. Beware! Whoever calls to this course [of sectarianism], kill him, even though he may be under this headband of mine.” [Ali (R.A) Sermon:126, Nahjul-Blagha].


Amman Message: In July 2005 CE, H.M. King Abdullah II convened an international Islamic conference of 200 of the world’s leading Islamic scholars ‘Ulama) from 50 countries. In Amman, the scholars unanimously issued a ruling on three fundamental issues (which became known as the ‘Three Points of the Amman Message’):

These Three Points were then unanimously adopted by the Islamic World’s political and temporal leaderships at the Organization of the Islamic Conference summit at Makkah in December 2005..
Question#10: Do you have any political agenda or motive?
No,PFN does not have political agenda, it's basically for information sharing to create awareness and mutual understanding among Muslims and non Muslims to live in harmony with peace  as emphasised by Islam. The Islam followed by majority of 1.6 billion Muslims not few misguided extremists and terrorists.
Question#11: How can PFN change the Muslim societies which are corrupt, abandoned the Islamic practices of morality and virtues?
The societies are reformed through peaceful evolutionary process. Muslims possess the golden history full of achievements in all fields, including knowledge and sciences. PFN is an endeavour to create awareness, it's just one part of collective effort, a drop in ocean. Our job is to make an effort instead of sitting idle and keep cursing. Allah may accept and make it fruitful.

Question#12: Any plan or proposed road map for peace?

Efforts have been made to identify the weak spots and main issues, proposing some workable options to move forward, it also includes the work of scholars:
Question#13 : How can I join PFN?
By sharing information, following the PFN sites at web, by sharing information via social media could be your contributing for peace. Visit and subscribe to PFN blogs and social media at follwing links:


Question#14: How  Peace Forum Network claims of millions of hits/visits?
Peace Forum Network has over 50 Blogs, Magazines,  Video Channels, Social Media & WhatsApp Broadcasts as mentioned above. The hits/visits are available through stats and analytical tools. In most cases the stats are visible to to the visitors.

Back to: Peace Forum Network