Say, "Who prohibited the nice things GOD has created for His creatures, and the good provisions? Say, "Such provisions are to be enjoyed in this life by those who believe. Moreover, the good provisions will be exclusively theirs on the Day of Resurrection." We thus explain the revelations for people who know. Say, "My Lord prohibits only evil deeds, be they obvious or hidden, and sins, and unjustifiable aggression, and to set up beside GOD powerless idols, and to say about GOD what you do not know." [Quran; 7:32-33] 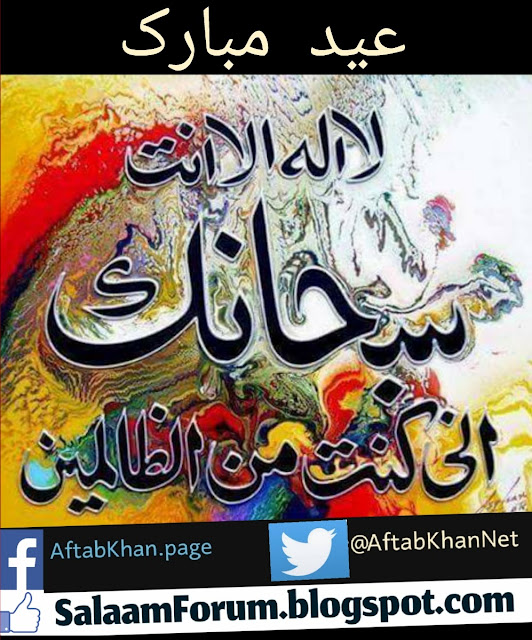 Eid al-Adha (Arabic: عيد الأضحى‎, translit. ʿīd al-aḍḥā, lit. 'Feast of the Sacrifice'‎,also called the "Sacrifice Feast", is the second of two Muslim holidays celebrated worldwide each year, and considered the holier of the two. It honors the willingness of Ibrahim (Abraham) to sacrifice his son, as an act of obedience to God's command. Before he sacrificed his son God intervened by sending his angel Jibra'il (Gabriel), who then put a lamb in his son's place. In commemoration of this, an animal is sacrificed and divided into three parts: one third of the share is given to the poor and needy; another third is given to relatives, friends and neighbors; and the remaining third is retained by the family. In the Islamic lunar calendar, Eid al-Adha falls on the 10th day of Dhu al-Hijjah.

Eid al-Fitr (عيد الفطر‎ ʻĪd al-Fiṭr], "festival of breaking of the fast"), also called Feast of Breaking the Fast, the Sugar Feast, Bayram (Bajram), the Sweet Festiva and the Lesser Eid, is an important religious holiday celebrated by Muslims worldwide that marks the end of Ramadan, the Islamic holy month of fasting (sawm). This has to do with the communal aspects of the fast, which expresses many of the basic values of the Muslim community; e.g., empathy for the poor, charity, worship, steadfastness, patience etc. Fasting is also believed by some scholars to extol fundamental distinctions, lauding the power of the spiritual realm, while acknowledging the subordination of the physical realm. It also teaches a Muslim to stay away from worldly desires and to focus entirely on the Lord and thank Him for his blessings. It is a rejuvenation of the religion and it creates a stronger bond between the Muslim and his Lord. After the end of Ramadan, is a big celebration of Eid that is very importance Islamic tradition. The religious Eid is a single day and Muslims are not permitted to fast that day. The holiday celebrates the conclusion of the 29 or 30 days of dawn-to-sunset fasting during the entire month of Ramadan. The day of Eid, therefore, falls on the first day of the month of Shawwal. This is a day when Muslims around the world show a common goal of unity. The date for the start of any lunar Hijri month varies based on the observation of new moon by local religious authorities, so the exact day of celebration varies by locality. However in most countries, it is generally celebrated on the same day as Saudi Arabia.

Eid al-Fitr has a particular Salat (Islamic prayer) consisting of two Rakats (units) and generally offered in an open field or large hall or main mosque.  It may only be performed in congregation (Jama’at) and, has an additional extra six Takbirs (raising of the hands to the ears while saying "Allāhu Akbar", literally "God is greatest"), three of them in the beginning of the first raka'ah and three of them just before Ruku' in the second raka'ah in the Hanafi school of Sunni Islam. Other Sunni schools usually have twelve Takbirs, seven in the first, and five at the begining of the second raka'ah. This Eid al-Fitr salat is, depending on which juristic opinion is followed, Fard (obligatory), Mustahabb (strongly recommended, just short of obligatory) or mandoob (preferable).

Muslims believe that they are commanded by God, as mentioned in the Quran, to continue their fast until the last day of Ramadan and pay the fitra (charity to poors) before offering the Eid prayers.
History

Before the advent of Islam in Arabia, there is mention of festivals as well as some others among the Arabs. The Israelites had festivals as well, but as is evident from the Old Testament and other scriptures, these festivals related more to commemorating certain days of their history. Eid al-Fitr was originated by the Islamic prophet Muhammad (pbuh). It is observed on the first of the month of Shawwal at the end of the month of Ramadan, during which Muslims undergo a period of fasting.
According to certain traditions, these festivals were initiated in Madinah after the migration of Muhammad from Mecca. Anas reports:

When the Prophet (pbuh) arrived in Madinah, he found people celebrating two specific days in which they used to entertain themselves with recreation and merriment. He asked them about the nature of these festivities at which they replied that these days were occasions of fun and recreation. At this, the Prophet remarked that the Almighty has fixed two days [of festivity] instead of these for you which are better than these: Eid al-Fitr and Eid al-Adha

For Muslims, both the festivals of Eid al-Fitr and Eid al-Adha are occasions of showing gratitude to God and remembering Him, and are an occasion of entertainment. ‘Aishah narrates that when on an Eid day her father Abu Bakr stopped young girls from singing, Muhammad said: Abu Bakr! [Let them sing]; every nation has an ‘id and [this day] is our Eid.

Eid al-Fitr is celebrated for one, two or three days. Common greetings during this holiday are the Arabic greeting ‘Eid Mubārak ("Blessed Eid") or ‘Eid Sa‘īd ("Happy Eid"). In addition, many countries have their own greetings in the local language – in Turkey, for example, a typical saying might be Bayramınız kutlu olsun or "May your Bayram – Eid – be blessed." Muslims are also encouraged on this day to forgive and forget any differences with others or animosities that may have occurred during the year.

Typically, practicing Muslims wake up early in the morning—always before sunrise— offer Salatul Fajr (the pre-sunrise prayer), and in keeping with the traditions of the Prophet Muhammad (pbuh) clean their teeth with a toothbrush, take a shower before prayers, put on new clothes (or the best available), and apply perfume.

It is forbidden to fast on the Day of Eid. It is customary to acknowledge this with a small sweet breakfast, preferably of the date fruit, before attending a special Eid prayer (known as salaat).

As an obligatory act of charity, money is paid to the poor and the needy (Arabic: Sadaqat-ul-fitr) before performing the ‘Eid prayer:

Muslims recite the following incantation in a low voice while going to the Eid prayer: Allāhu Akbar, Allāhu Akbar, Allāhu Akbar. Lā ilāha illà l-Lāh wal-Lāhu akbar, Allahu akbar walil-Lāhi l-ḥamd. Recitation ceases when they get to the place of Eid or once the Imam commences activities.   Muslims are recommended to use separate routes to and from the prayer grounds.

The Eid prayer is performed in congregation in open areas like fields, community centers, etc. or at mosques. No call to prayer is given for this Eid prayer, and it consists of only two units of prayer with an additional six incantations. The Eid prayer is followed by the sermon and then a supplication asking for God's forgiveness, mercy, peace and blessings for all living beings across the world. The sermon also instructs Muslims as to the performance of rituals of Eid, such as the Fira (charity) & zakat. Listening to the sermon at Eid is not required and is optional, a Sunnah i.e. while the sermon is being delivered. After the prayers, Muslims visit their relatives, friends and acquaintances or hold large communal celebrations in homes, community centers or rented halls. In some countries peole visit  graveyards to remember and pray for the dead relatives.

Eid gifts, known as Eidi, are frequently given at eid to children and close relatives.Women and girls decorate their hands with Hina.
http://en.wikipedia.org/wiki/Eid_al-Fitr