The Tragedies of Ukraine and Gaza 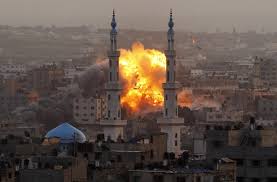 By: JUDY DEMPSEY
The news coming out of both eastern Ukraine and the Gaza Strip has exposed the helplessness of the West in trying to cope with and resolve two intractable crises.
In Ukraine, the government has blamed pro-Russian separatists for the downing on July 17 of Malaysian Airlines Flight MH17, which was on its way from Amsterdam to Kuala Lumpur. The plane was carrying 283 passengers and fifteen crew members. There are no reports of survivors. Pro-Russian rebels and the Kremlin have denied any involvement.
In the Middle East on the same day, Israel was preparing to send troops into the Gaza Strip. The Israeli security forces said they wanted to bomb concrete tunnels through which Hamas, the radical Islamist movement that controls Gaza, has launched hundreds of rockets into Israel.

Israel has already inflicted terrible suffering on the people of Gaza. More than 200 civilians, including 40 children, have been killed since the current wave of violence began, according to the United Nations. One Israeli has been killed.

Until now, the United States and the European Union have reacted to the Ukraine crisis by imposing sanctions on Russia, and to the Israeli-Palestinian conflict with an extraordinary degree of helplessness.
Yet the longer these crises last, the more the parties to both conflicts will become hardened and inured to pressure from the Americans or the Europeans. Moreover, if these two conflicts continue, the possibility will only increase that they will spill over into their respective regions.
Transnistria, a Russian-backed breakaway region of Moldova that borders Ukraine, is a tinderbox in the making. Can one imagine pro-Russian rebels launching an uprising in Transnistria that would provoke Moldova’s weak government into reacting militarily? How would neighboring Romania, an EU and NATO member, respond? Bucharest has its own ambitions toward Moldova, which is predominantly Romanian speaking.
Nor should the intense Russian propaganda currently being fed to Russian minorities in the Baltic states be forgotten amid efforts to maintain the stability of these countries.
The United States and the EU but also Russia have to find ways to work together—and quickly. It is in Russia’s interests to do so. Otherwise, the EU seems prepared to ratchet up its sanctions against Moscow.
Yet it is simply impossible to know what Russian President Vladimir Putin’s long-term intentions are toward eastern Ukraine. If, as many fear, Putin intends to spread instability and provoke his Ukrainian counterpart, Petro Poroshenko, into going on the offensive in the region, then the casualties and refugees will increase. The losers will be many. The only glimmer of hope from the terrible plane crash is that it just might be a catalyst for serious negotiations.
Meanwhile, on Israel’s bombing of Gaza, the United States and Israel have asked Egypt’s President Abdel Fattah el-Sisi to mediate. But there is no love lost between Hamas and Sisi, who has banned the Muslim Brotherhood, another Islamist movement, in his country.
As for the Palestinian leader, Mahmoud Abbas, he is toothless. It is remarkable that Palestinians in the West Bank haven’t either rebelled against his corrupt leadership or even become radicalized as a result of being locked in by Jewish settlements.
Some analysts have suggested that the United States and the EU should simply walk away from the Israeli-Palestinian conflict. That, they argue, would force the two sides to deal with one another directly rather than playing the Americans and the Europeans off against each other. Well, the West stood by in Syria, and look at what happened there.
Unfortunately, it will take a much greater catastrophe in the Middle East than anything seen so far to move the Israelis and Palestinians toward a sustainable agreement—unless the United States is really serious about mediating.
http://carnegieeurope.eu/strategiceurope/?fa=56195