A Muslim American man carrying a duffel bag that holds six homemade explosives, a machete, and poison spray travels to a major U.S. airport. The man enters the airport, approaches the TSA security checkpoint, and then sprays two TSA officers with the poison. He then grabs his machete and chases another TSA officer with it.

This Muslim man is then shot and killed by the police. After the incident, a search of the attacker’s car by the police reveals it contained acetylene and oxygen tanks, two substances that, when mixed together, will yield a powerful explosive.

If this scenario occurred, there’s zero doubt that this would be called a terrorist attack. Zero. It would make headlines across the country and world, and we would see wall-to-wall cable news coverage for days. And, of course, certain right-wing media outlets, many conservative politicians, and Bill Maher would use this event as another excuse to stoke the flames of hate toward Muslims.

Well, last Friday night, this exact event took place at the New Orleans airport—that is, except for one factual difference: The attacker was not Muslim. Consequently, you might be reading about this brazen assault for the first time here, although this incident did receive a smattering of media coverage over the weekend.

The man who commited this attack was Richard White, a 63-year-old former Army serviceman who has long been retired and living on Social Security and disability checks. He was reportedly a devout Jehovah’s Witness.

Given the facts that a man armed with explosives and weapons traveled to an airport and only attacked federal officers, you would think that the word “terrorism” would at least come up as a possibility, right?  But it’s not even mentioned.

Instead, law enforcement was quick to chalk this incident up to the attacker’s alleged “mental health issues.” That was pretty amazing police work considering this conclusion came within hours of the attack. There was no mention by police that they had even explored whether White had issues with the federal government stemming from his military service, if there was any evidence he held anti-government views, etc.

Perhaps Mr. White truly was mentally ill. Interviews with his neighbors, however, don’t even give us a hint that he had mental problems. Rather they described White as a “meek” and “kind” man who a few had spoken to just days before the incident and everything seemed fine. You would think these neighbors would at least note that White had a history of mental illness if it was so apparent.

Now I’m not saying definitively that I believe Mr. White was a terrorist. My point is twofold. One is that if White had been a Muslim, the investigation into his motivation by the media and maybe even the police would have essentially been over once his faith had been ascertained. If a Muslim does anything wrong, it’s assumed to be terrorism. (Apparently we Muslims can’t be mentally ill.)

In contrast, when a non-Muslim engages in a violent attack, even on federal government employees, law enforcement and the media immediately look to the person’s mental history, not possible terrorist motivations.

No wonder so many parrot the line, “Not all Muslims are terrorists, but all terrorists are Muslims.” When the press uses the word terrorism only in connection with the actions of Muslims, the average person would assume that’s the case. However, as I have written about before, in recent years overwhelmingly the terrorist attacks in United States and Europe have been committed by non-Muslims.

If White had been a Muslim, the investigation into his motivation would have essentially been over once his faith had been ascertained.
My second point is that this could have in fact been act of terrorism. White clearly targeted only the TSA officers. He didn’t assault others in the airport, such as the passengers waiting on line at the security checkpoint. And for those unfamiliar, there has been a great deal of animus directed at the TSA by some conservatives and libertarians. Simply Google the words “stop the TSA” and you will see pages of articles denouncing the TSA as an organization hell bent on depriving Americans of our liberty.

For example, Alex Jones’ Infowars website is filled with anti-TSA articles claiming that the TSA’s goal is not to prevent terrorism but to “harass” travelers and get into “our pants.” Glen Beck warned in the past that the TSA was potentially becoming President Obama’s “private army” with the goal being to take away our liberties.

And in 2012, Senator Rand Paul lashed out against the TSA for what he viewed as the agency’s improper treatment of him. In fact after the incident, Paul penned an op-ed denouncing the TSA, writing that “it is infuriating that this agency feels entitled to revoke our civil liberties while doing little to keep us safe.”

Even more alarmingly, the attacks on the TSA have not been limited to words. In October 2012, Paul Ciancia traveled to LAX, where he took out a rifle from his bag and shot two TSA officers, killing one. Ciancia had written anti-government tracts in the past and was—to little media fanfare—actually charged months later with an act of terrorism.

Given this climate, how can the police not even mention that they investigated the possibility of terrorism and ruled it out? Part of me actually believes that there are some in the media and law enforcement who prefer to use the term terrorism only when it applies to a Muslim.

Why? Because it’s easy to do. Muslims are viewed by many as the “other,” not as fellow Americans. But discussing domestic terrorism carried out by fellow Americans is at best, uncomfortable, and at worst, undermines the narrative that some in our country have a vested interest in advancing.

I’m not sure what will change this mindset, but if we want to truly keep Americans safe, law enforcement and the media need to understand that terrorism is not just a Muslim thing.

Surprise! Another Christian Terrorist
by The Daily Beast, thedailybeast.com 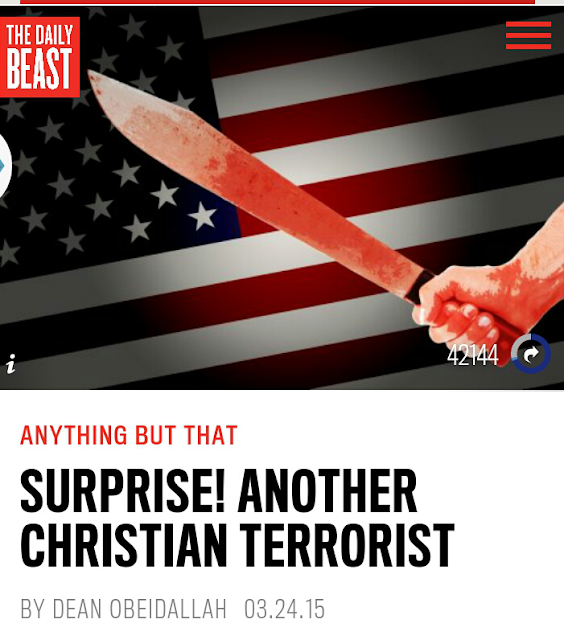