PAKISTAN’S diplomatic initiatives with Afghanistan and India have both collapsed. 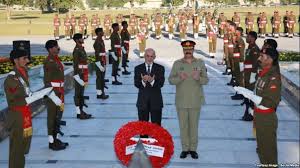 Afghanistan’s President Ghani and Pakistan’s prime minister and army chief were sincere in desiring normalisation. The implicit bargain was that Pakistan would deliver the Afghan Taliban to the negotiating table while Afghanistan would act against Tehreek-i-Taliban Pakistan (TTP) leaders and militants hiding in Afghan territory. Success would have implied: enhanced security within Pakistan from TTP-engineered terrorism and attacks by the Baloch Liberation Army (BLA), and an end to Indian pressure on Pakistan on the western front; the re-emergence of the Afghan Taliban as a political force in Kabul; and the complete withdrawal of foreign forces from Afghanistan.

It was evident from the outset that India and hostile elements in Afghanistan would work overtime to subvert this peace initiative. They appear to have succeeded.

The debacle on the west is intimately related to the disturbing developments in the east.
The Islamabad-Kabul understanding was based on over-optimistic expectations on both sides. Ghani’s ability to act against the TTP and the BLA was constrained by his lack of control of the Afghan security establishment, especially the National Directorate of Security (NDS) — Afghanistan’s intelligence agency — led by a Karzai holdover. Kabul proved unable (or unwilling) to kill, capture or expel Mullah Fazlullah and other TTP elements holed up in Afghanistan.

Similarly, Pakistan promised too much in offering to bring the Afghan Taliban to the negotiating table. To do so, Islamabad was obliged to revive or reveal its contacts with them. If the Kabul-Taliban talks had succeeded, few would have objected to the presence of Afghan Taliban leaders in Pakistan. Unfortunately, the revelation of Mullah Omar’s demise by the NDS upended the talks. (Pakistan’s failure was in either not knowing of Mullah Omar’s death or not preventing the NDS from gaining knowledge of this while senior Taliban commanders remained unaware.)

As no doubt anticipated by the NDS and its Indian patrons, a leadership struggle ensued between the ‘fight’ and the ‘fight and talk’ factions within the Taliban. To salvage the talks, Pakistan’s agencies attempted to hastily gather the Taliban leaders to select Omar’s deputy as the new Amirul Momineen, further exposing the relationship. But the Taliban’s fighting faction, freed of Mullah Omar’s ghost edicts supporting talks, and fearful of losing ground to the self-styled ‘Islamic State’ (IS), escalated its attacks within Afghanistan, particularly against targets in Kabul.

Under pressure to avoid blame for the security failures in Kabul, and aware that Islamabad was no longer able to deliver the Taliban to the negotiating table, President Ghani took the easy route of placing all the blame on Pakistan. His Aug 10 statement was indistinguishable from Karzai’s familiar diatribes against Pakistan. Chief Executive Abdullah and other factions joined him in whipping up the anti-Pakistan animus. The ‘gathering’ of Taliban leaders to choose Mullah Mansour as Omar’s successor was used as a basis to extrapolate that Pakistan maintained Taliban sanctuaries and bomb-making factories, and connived in the Taliban attacks. Ghani declared that he did not want Pakistan to bring the Taliban to the table but to “prosecute” them.

Kabul was the scene of orchestrated demonstrations against Pakistan, the burning of Pakistan’s national flag, calls for boycott of trade with and even ‘jihad’ against Pakistan. A demand was made that an Afghan delegation be immediately received by Pakistan’s prime minister and army chief.

Instead of protesting Kabul’s unsubstantiated charges and demanding an apology for the desecration of Pakistan’s national flag, Pakistan’s leadership meekly received the angry Afghan delegation to clear the “misunderstanding” ( to quote Sartaj Aziz).

Pakistan will be able to evoke respect for its national interests only if it respects its own dignity and honour. Pakistan should demand an apology from Kabul for the desecration of its national flag and a retraction of the wild accusations voiced by Ghani and other Afghan leaders. If they desire a trade boycott, Pakistan should fulfil their wish and halt all trans-shipment and transit until they reverse their hostility.

At the strategic level too, there is need for a careful policy review to deal with an Afghanistan that is likely to be embroiled in chaos and conflict for some time. Pakistan should: first, secure its border against TTP and BLA infiltration from Afghan territory; second, devise strategies to eliminate their safe havens in Afghanistan; third, promote coherence among the Afghan Taliban; and, fourth, work with China, Russia, the US, Iran and Saudi Arabia to resume the Kabul-Taliban talks and insulate Afghanistan from infiltration by the IS.

The debacle on the west is intimately related to the disturbing developments in the east. Apart from working to scuttle a Pakistan-Afghan rapprochement, India has rejected Pakistan’s endeavours to resume the ‘composite dialogue’ and exerted direct pressure on Pakistan to keep it on the diplomatic and military defensive — thus the Line of Control (LoC) violations, threatening statements and the hostile media and diplomatic campaigns.

Instead of a muscular response, Pakistan has virtually endorsed the Indian premises for normalisation in the Ufa statement by restricting the Pakistan-India talks to terrorism, evoking public denunciation within the country and disappointment from Kashmiri leaders.

The Gurdaspur incident, on the eve of the scheduled terrorism talks, is no accident. Indian agencies are past masters at stage-managing such events to suit their purpose. The Indian media has been unleashed to pin blame for this incident also on Pakistan. Yet, Pakistan’s national security adviser plans to walk blithely into this Indian entrapment in New Delhi next week.

The right response would be to: call off this ill-conceived exchange; respond effectively to the Indian media onslaught by projecting India’s support for the TTP and BLA and its historic role as a state sponsor of terrorism; protest formally to the UNMOGIP and the Security Council about India’s LoC violations; and raise India’s human rights violations in occupied Kashmir at the Human Rights Council and other international forums.

Instead of submitting to Modi’s agenda, Pakistan should remind the world that: Kashmir remains a nuclear flashpoint and must be addressed, bilaterally or multilaterally; that India’s arms build-up will oblige Pakistan to respond appropriately; and that the danger of a disastrous conflict can be avoided only through a comprehensive dialogue encompassing Kashmir and reciprocal arms control between Pakistan and India.

By MUNIR AKRAM;a former Pakistan ambassador to the UN.
Dawn.com

▶
www.reuters.com/.../us-afghanistan-taliban-pakistan-id...
Jul 30, 2015
"Pakistan and other friendly countries ofAfghanistan hope that the Taliban leadership will stay engaged in ...