London's Muslim mayor invites Trump to 'educate' him on Islam

Khan rejected the notion that Islam was incompatible with modern Western values and said Trump’s “ignorant” views on Islam were “playing into the hands of extremists.”

“I want Donald Trump to come to London so I can introduce myself to him as a mainstream Muslim, very, very comfortable with Western liberal values, but also introduce him to hundreds of thousands, dare I say millions of Muslims in this country, who love being British, love being Western,” the new mayor said in an interview with NBC News on Friday.

In December, Trump called for a “total and complete” ban on Muslims entering the United States after a deadly mass shooting in San Bernardino, California, which was inspired by the Daesh (ISIL) terrorist group.

The proposal triggered widespread criticism and condemnation in the US and around the world.

Protesters gather outside of the Republican National Committee where Donald Trump was about to meet party leaders on Capitol Hill in Washington, DC on May 12, 2016. (AFP photo)
“I want to educate Donald Trump. I want to show him that you can be Muslim and be Western,” said Khan.

Khan, the son of a Pakistani bus driver scored a resounding victory in last week's London mayoral election over his billionaire Conservative rival Zac Goldsmith, who was accused of running a “dog whistle” campaign of drawing attention to Khan’s Muslim faith and trying to link him to extremist groups.

Trump, the presumptive Republican nominee, told the New York Times this week that he was “happy” about Khan's election and that the Muslim mayor could be an exception to his proposed ban.

Khan rejected Trump's exemption, and said he will try to visit the United States before the November presidential election.
http://www.presstv.ir/Detail/2016/05/14/465528/Khan-wants-to-educate-Trump-on-Islam- 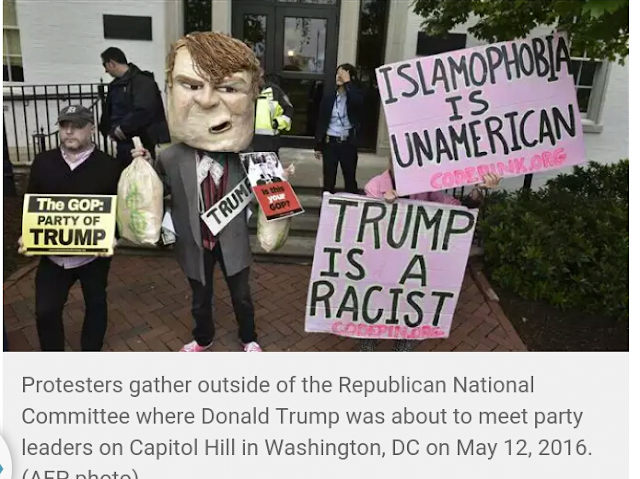