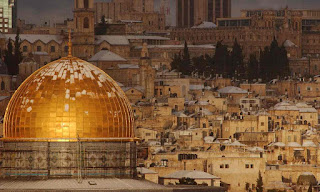 An impeccably qualified author, frustrated with media negativity, sees a solution in pluralism and a revival of overlapping faith communities
 
Representatives of Iraq’s Shia ayatollahs shepherd Christian bishops round the Imam Ali shrine in the holy city of Najaf. At the nearby University of Kufa the dean of the Islamic Law faculty runs a Talmud class as part of his inter-faith programme. Rabbi Michael Melchior, a former Israeli deputy foreign minister, crafts an alternative peace agreement for Palestine with Nasr al-Din al-Shaer, Hamas’s former deputy prime minister of the Palestinian National Authority. Meanwhile, in Istanbul local Muslim and Christian leaders broach the idea of reconsecrating Hagia Sophia, once the seat of the Byzantine patriarch and later the Ottoman caliph’s favourite mosque, as a shared sanctuary where each of the two religions could pray on Fridays and Sundays.

Some might call these phenomena aberrations, but for Nicolas Pelham they are evidence that the narrative of relentless negativity and narrow-minded sectarianism in the Middle East conveyed by most media is simplistic and wrong. It is rare to come across a book on the region that charts a positive path for the future; rarer still to find one that advocates religious leadership and pragmatic communalism as the means for reaching peace.

Pelham’s credentials are impeccable. Now working for the Economist and previously for the Financial Times, he is one of the few western correspondents covering the region who speaks fluent Arabic and combines academic understanding of Middle Eastern culture and history with a reporter’s eye for vivid detail. His book focuses largely on Iraq and Israel/Palestine, though there are fascinating interviews with Abu Qatada, the veteran jihadi preacher, who turns out to be surprisingly bawdy in the privacy of his Jordanian home, and with Ara Sarafian, an exiled Armenian historian who sees Ottomanism, underpinned by democracy, as the best way to ensure Turkey’s peaceful development.

Pelham is more ambitious. He believes a revival of Ottoman values offers the best hope for the whole Middle East. Many previous writers have praised the religious pluralism of the Ottoman empire and its rulers’ tolerance of different cultures. Historians have used this record to counter those in the contemporary debate who accuse Islam of prejudice and suppression of other religions. Pelham takes a similar stand when he writes that Europe used to be a region from which, rather than to which, minorities fled, and that the Ottoman empire was where many found refuge.

But his broader point is that the past is not merely to be examined: its best aspects can be revived in today’s circumstances. He argues that the relative harmony of the Turkish empire arose from the rulers’ decision to administer it on sectarian lines, devolving authority to the leaders of the numerous faith communities, or “millets”. “Patriarchs, chief rabbis and Muslim clerics headed semi-autonomous theocracies that applied religious laws. But while the millets governed their respective co-religionists, they had no power over land … There were no ghettoes or confessional enclaves. Territorially, the powers of their respective leaders overlapped,” he writes. The system was milletocracy.

It came to an end with the collapse of the Ottoman empire in the first world war. Milleticide was committed by the Young Turks whose nationalism led them to repress or expel minorities and by western leaders who attempted to refashion the region by making it a patchwork of homogenous states. Pelham takes an especially dim view of Fridtjof Nansen, the Norwegian Nobel peace prize-winner, who sanctioned the ethnic cleansing of the defunct Ottoman empire’s Turkish and Greek communities under the guise of population exchange. “Unmixing the populations of the near east will tend to secure true pacification of the near east,” he argued. Pelham does not spare the decision-makers in London and Paris, who had a similar strategy. The British government partitioned Jerusalem into separate religious quarters, and then did the same for the whole of Palestine. As early as 1870, France had abolished Algeria’s millet system and granted French citizenship to Algeria’s Jews but not to its Muslims.

“The unmixing of sects triggered a century of wars designed to turn holy communities into holy lands,” Pelham argues. “The faith community acquired the trappings and attributes of a nation state. Defence of the land took precedence over universal values … Thus transformed, the region’s millets proved as ruthless as contemporary jihadis.” The generals of the Young Turks eradicated the Armenian millet in eastern Turkey as well as the Greek millet in the west. Jewish nationalists extirpated 85% of Palestine’s Muslim millet. In the latest chapter of milleticide, the Islamic State group has homogenised the area it controls by destroying the mosaic of Yazidis, Assyrian Christians and Shia Muslims who had lived for more than a millennium in Mesopotamia.

Pelham has harsh things to say about the House of Saud, whose rulers have let developers build a Muslim Las Vegas in Mecca and who deny non-Muslims access, though the Prophet had lived in the city with his Christian and Jewish wives. He has better things to say about the few places in northern Israel where Jews and Arabs have created bohemian neighbourhoods of mutual tolerance.

These are the green shoots of the revival of the millet system that Pelham believes is the best way to end today’s sectarian monopolies. Instead of peace negotiations that focus on border demarcation and partition, as in the two-state solution for Israel/Palestine, he advocates the decoupling of state from territory. It’s a one-state solution in which Arabs and Jews are equal citizens but with the additional element that as well as individual liberties there should be an acknowledgement of autonomous confessional systems as in those of the Taif agreement which ended Lebanon’s civil war. He points out that in Jordan and Israel religious courts prevent individuals from marrying outside their sect but he says precedent suggests that once existential fears subside, religious leaders can display pragmatism. The cult of victimhood and suspicion of Shiism that currently pervades Sunni communities is at its most extreme form with Isis but also prevalent among other Iraqi Sunnis and throughout the Sunni-majority Gulf states. It could be eased if religious leaders were freed from their fears of exclusion and enabled to go back to the traditions of tolerance and openness that once characterised the region.

Pelham is enough of a realist to know that hard-line governments, decades of vested interests and the pressures from prejudiced media will make it difficult for public consciousness to change. But he makes a powerful case that a regional alliance of overlapping millets, not connected with territorial boundaries, offers a better vision for restoring stability to the Middle East than the current agendas for conflict management.