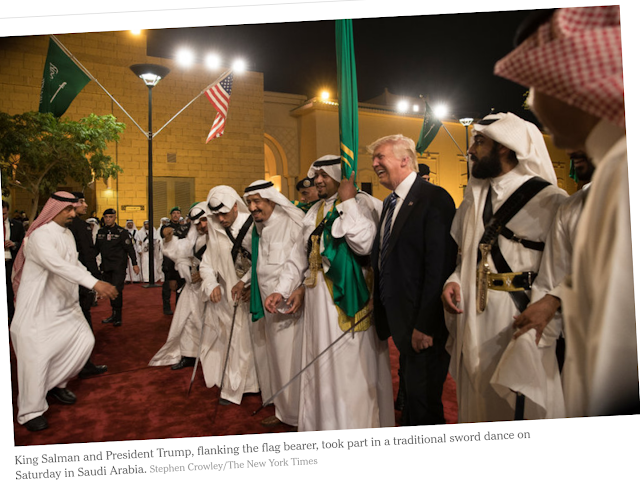 RIYADH, Saudi Arabia — President Trump delivered a forceful address here Sunday summoning the Muslim world to confront “the crisis of Islamic extremism” as he seeks to create new partnerships to unite against global terrorism.
Speaking from Saudi Arabia, the birthplace of Islam and home to several of the religion’s holiest sites, Trump implored the leaders of dozens of Muslim nations to take their own destinies in hand and, together with the United States, stop the killing of innocent people in the name of religion.
“This is not a battle between different faiths, different sects or different civilizations,” Trump said. “This is a battle between barbaric criminals who seek to obliterate human life and decent people, all in the name of religion — people that want to protect life and want to protect their religion. This is a battle between good and evil.”
Trump implicitly rejected the aspirational goals and call for democracy and human rights of former president Barack Obama, who also delivered a major speech to the Islamic world early in his presidency. “We are adopting a principled realism,” Trump said.
“We are not here to lecture,” he said. “We are not here to tell other people how to live, what to do, who to be or how to worship. Instead, we are here to offer partnership, based on shared interests and values.”

President Trump, right, and Egyptian President Abdel Fatah al-Sissi share a laugh during a meeting in Riyadh, Saudi Arabia, on May 21, 2017.
Photo by: Evan Vucci/AP
Trump called for unity in confronting Iran over its funding of terrorists and promotion of a “craven ideology.” He called on the Muslim world to help isolate Iran and, just days after Iranians reelected moderate President Hassan Rouhani, to “pray for the day when the Iranian people have the just and righteous government they so richly deserve.”
[Trump campaigned against Muslims but will preach tolerance in Saudi speech]
In the run-up to Trump’s visit, there was considerable speculation about whether he would utter the phrase “radical Islamic terrorism” in his speech, the centerpiece of his Saudi trip.
On the campaign trail, Trump loudly criticized Obama for refusing to describe the terrorism threat in those terms. But some of Trump’s top aides, including national security adviser H.R. McMaster, have been urging him to soften his language. Many Muslim leaders consider broad denunciations of their faith insulting.
In his Riyadh address, Trump decided to use a substitute phrase: “Islamist extremism.” But he slightly veered off the prepared excerpts released earlier by the White House, saying “Islamic” instead of “Islamist” on several occasions.
Describing the fight against terrorism, Trump spoke of “honestly confronting the crisis of Islamic extremism and the Islamists and Islamic terror of all kinds.”
Lamenting the scourge of terrorism across the Middle East, Trump exhorted, “Drive them out! Drive them out of your places of worship. Drive them out of your communities. Drive them out of your holy land. And drive them out of this Earth.”