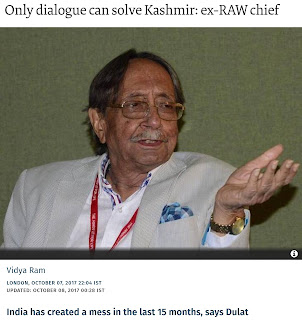 India has created a “mess” in Kashmir in the past 15 months, India’s former Intelligence chief said during a debate with a former Pakistani head of intelligence in London on Friday night, urging the need for “imagination” and dialogue going forward.

“Its high time we started talking,” said Amarjit Singh Dulat, former Research and Analysis Wing head, who spoke at a packed event held by the London School of Economics’ South Asia Forum, on the ability of intelligence agencies to do good — seen as a rare occasion when top figures from both services had come together at a public venue.

“Heavy handedness has never worked in Kashmir…actually it doesn’t work anywhere as we’ve seen recently in Spain,” Mr. Dulat said at the start of the debate.

“I think if there is one message that comes out of Kashmir, not today, not yesterday or the day before but as far back as one can remember…you can achieve a lot through love and compassion but you can never achieve it by force. That is the mistake we have created in the last 15 months,” Mr Dulat said. “Kashmir is part of India, an integral part of India and its not going anywhere but we need to deal with Kashmir in a more civilized manner.”

However, while there was “anger” and “even disgust” against India in Kashmir, there was “no love lost for Pakistan,” he added. “They realize there is nothing to be gained from Pakistan…Pakistan is only a convenient fall back position for Kashmiris,” he said.

The former R&AW chief said while India had borne the “brunt of terrorism for a long time” there was no way but to talk. “I would say in the case of Pakistan we need to make this one exception and talk along with them….Kashmir needs to be discussed and discussed upfront, not only between us but between Delhi and Srinagar.”

Opening the debate Ehsan-ul-Haq, the former director general of Pakistan’s Inter Services Intelligence said the situation in Kashmir, which had remained the oldest unresolved international dispute and the core issue in India-Pakistan relation, had taken a ”turn for the worse” since last July.

He said security forces had tackled protest with singular “ruthlessness” and flagged the “shocking and indiscriminate” use of pellet guns.

“The Kashmir dispute cannot be wished away…if left unresolved it will keep returning as a crisis with increased intensity,” he said adding that there were no problems between the two countries that couldn’t be resolved “through dialogue.”

“We must now structure a détente that reduces tensions and move meaningfully towards dispute resolution,” he said, though warned that Prime Minister Narendra Modi and his “extremist allies” were using harsh rhetoric against Pakistan to electoral and political advantage. “This does bode well for the future.”

Mr. Dulat concurred that dialogue was the only way forward, and India’s strategy of not engaging “makes no sense at all…because if you look at the worst days…even the coldest days of the cold war the KGB and CIA never stopped talking, Kennedy and Khrushchev never stopped talking…many believe that because of their letter writing it saved the world from a possible world war.”

He said there been instances in the past where Indian and Pakistani intelligence agencies had cooperated which had produced more than the “desired results” “We need imagination. Let us think ahead -not just of the immediate crisis that faces us -let us think ahead with compassion.”

While ul-Haq declined to confirm that secret meetings had taken place in the summer of 2003, with his Indian counterpart at the time CD Sahay - reported in the Indian media but never confirmed officially - he agreed on the need for intelligence agencies to keep channels of communication open no matter what happened at the political level. “That becomes the last resort sometimes for preventing and preempting crises,” he said. Dulat credited these talks with bringing about the 2003 ceasefire, and noted that a tip off from India had succeeded in saving the life of General Musharraf in 2003.
by Vidya Ram, thehindu.com
October 7, 2017 03:04 PM
......................

Relations between India and Pakistan with relations to Kashmir have been tense recently with both sides reporting frequent ceasefire violations along the Line of Control (LoC).
Pakistan forcefully took up the issue of India-held Kashmir and the human rights violations committed by India at the United Nations General Assembly, as well as the 36th session of Human Rights Council.
Pakistan's Permanent Representative to the United Nations Maleeha Lodhi had told the General Assembly that India's military occupation of Kashmir was illegal as the UN Security Council had, in over a dozen resolutions, decided that the dispute must be resolved by enabling the people of Jammu and Kashmir to determine their own destiny through a UN-supervised plebiscite.
She had also urged the international community to stop India from ceasefire violations on the LoC. Pakistan wants a resolution of all outstanding issues through talks, she had said, adding that India will have to give up the policy of terrorism.
Lodhi recalled that India's brutal occupation of Kashmir has killed over 100,000 innocent Kashmiris, saying although India had launched a campaign of brutality inside Kashmir — including the shooting and blinding of innocent Kashmiri children with pellet guns — yet, it had failed to subdue these Kashmiri children, women and youth who come out on the streets almost daily to demand that India get out of occupied Kashmir.


“India cannot hide behind semantics. Any interstate dispute, like Kashmir, is by definition an ‘international’ dispute. If the parties fail to resolve a dispute, the UN and the international community has not only the right but the obligation to intervene and help to resolve the dispute,” she had said, adding that as a pre-condition for a fruitful dialogue, India will have to shun the policy of terrorism and supporting terrorism in Pakistan.
https://www.dawn.com/news/1362483
Kashmir issue:
http://pakistan-posts.blogspot.com/p/kashmir.html
~ ~ ~ ~ ~ ~ ~ ~~ ~ ~ ~ ~ ~  ~ ~ ~  ~