How Thomas Jefferson’s secret Bible might have changed history

Thomas Jefferson and his Bible

Read also: Bible: Myths and their Parallels in other religions By T. W. Doane
The 'Jefferson Bible' was Thomas Jefferson's attempt to extract an authentic Jesus from the Gospel accounts.by Marilyn Mellowes.The White House, Washington, D.C. 1804.

Thomas Jefferson was frustrated. It was not the burdens of office that bothered him. It was his Bible. Jefferson was convinced that the authentic words of Jesus written in the New Testament had been contaminated. Early Christians, overly eager to make their religion appealing to the pagans, had obscured the words of Jesus with the philosophy of the ancient Greeks and the teachings of Plato. These "Platonists" had thoroughly muddled Jesus' original message. Jefferson assured his friend and rival, John Adams, that the authentic words of Jesus were still there. The task, as he put it, was one of abstracting what is really his from the rubbish in which it is buried, easily distinguished by its lustre from the dross of his biographers, and as separate from that as the diamond from the dung hill.
With the confidence and optimistic energy characteristic of the Enlightenment, Jefferson proceeded to dig out the diamonds. Candles burning late at night, his quill pen scratching "too hastily" as he later admitted, Jefferson composed a short monograph titled The Philosophy of Jesus of Nazareth. The subtitle explains that the work is "extracted from the account of his life and the doctrines as given by Matthew, Mark, Luke & John." In it, Jefferson presented what he understood was the true message of Jesus.
Jefferson set aside his New Testament research, returning to it again in the summer of 1820. This time, he completed a more ambitious work, The Life and Morals of Jesus of Nazareth Extracted Textually from the Gospels in Greek, Latin, French and English. The text of the New Testament appears in four parallel columns in four languages. Jefferson omitted the words that he thought were inauthentic and retained those he believed were original. The resulting work is commonly known as the "Jefferson Bible."
Who was the Jesus that Jefferson found? He was not the familiar figure of the New Testament. In Jefferson's Bible, there is no account of the beginning and the end of the Gospel story. There is no story of the annunciation, the virgin birth or the appearance of the angels to the shepherds. The resurrection is not even mentioned.
Jefferson discovered a Jesus who was a great Teacher of Common Sense. His message was the morality of absolute love and service. Its authenticity was not dependent upon the dogma of the Trinity or even the claim that Jesus was uniquely inspired by God. Jefferson saw Jesus as
a man, of illegitimate birth, of a benevolent heart, (and an) enthusiastic mind, who set out without pretensions of divinity, ended in believing them, and was punished capitally for sedition by being gibbeted according to the Roman law.
In short, Mr. Jefferson's Jesus, modeled on the ideals of the Enlightenment thinkers of his day, bore a striking resemblance to Jefferson himself.
Read more: http://www.pbs.org/wgbh/pages/frontline/shows/religion/jesus/jefferson.html#ixzz1jH0tUFwR
~~~~~~~~~~~~~~~~~~~~~~~~~~~~~~~~~~~~~~~~~~~~~~~~~~~~~~~~~~~~~~~~~~~~
Editor's note: Mitch Horowitz is editor-in-chief of Tarcher/Penguin and editor of Penguin’s new reissue of The Jefferson Bible.

By Mitch Horowitz, Special to CNN

(CNN) – Imagine the following scenario: A U.S. president is discovered to be spending his spare time taking a razor to the New Testament, cutting up and re-pasting those passages of the Gospels that he considered authentic and morally true and discarding all the rest.
Gone are the virgin birth, divine healings, exorcisms and the resurrection of the dead, all of which the chief executive dismissed as “superstitions, fanaticisms and fabrications.”
Such an episode occurred, although the revised version of Scripture remained unseen for nearly seven decades after its abridger’s death. Thomas Jefferson intended it that way.
During most of his two terms in the White House, from 1801 to 1809, and for more than a decade afterward, Jefferson – the third U.S. president and the principal author of the Declaration of Independence – committed himself to a radical reinterpretation of the Gospels.
With a razor and glue brush at this side, Jefferson lined up English, French, Greek and Latin editions of Scripture and proceeded to cut up and reassemble the four Gospels into an exquisitely well-crafted, multilingual chronology of Christ’s life. 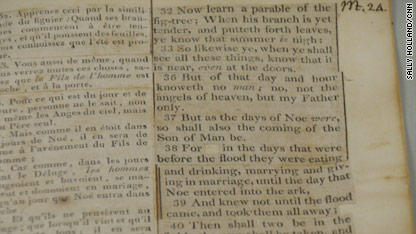 Jefferson lined up different editions of Scripture.
In Jefferson’s view, this revision represented a faithful record of Christ’s moral code, minus the miracles that the Enlightenment-era founder dismissed as historical mythmaking.
The book eventually became known as The Jefferson Bible and is now being rediscovered in new editions, including one published this month by Tarcher/Penguin, and as the focus of a Smithsonian exhibit.
Ask most people today if they have heard of Jefferson’s Bible and you will receive blank stares. Indeed, for much of American history, The Jefferson Bible was entirely unknown. Jefferson intended it as a work of private reflection, not a public statement.
As contemporary readers discover the work, it is tempting to wonder how American history might look different had Jefferson’s radical document come to light closer to its completion.
Jefferson was still working on his Bible during his presidency, so its theoretical publication wouldn’t have compromised his electability. But if the book had been made public after its final completion in 1820, when Jefferson had only six more years to live, it likely would have become one of the most controversial and influential religious works of early American history. 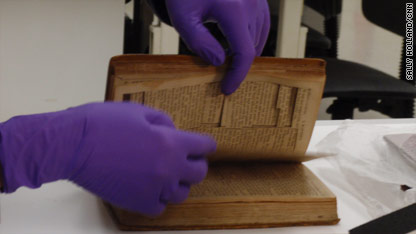 A curator handles a "source" Bible from which Jefferson cut out passages.
That was a scenario Jefferson took pains to avoid. After being called an “infidel” during his 1800 presidential race, Jefferson knew the calumny he could bring on himself if word spread of his “little book.” Although he had his work professionally bound, he mentioned it only to a select group of friends. Its discovery after his death came as a surprise to his family.
Jefferson’s wish for confidentiality held sway until 1895 when the Smithsonian in Washington made public his original pages, purchased from a great-granddaughter. In 1904, Congress issued a photolithograph edition and presented it for decades as a gift to new legislators, a gesture that would likely cause uproar in today’s climate of political piety.
Because of the book’s long dormancy following Jefferson’s death, and its limited availability for generations after – arguably the first truly accessible edition didn’t appear until 1940 –The Jefferson Bible has remained a curio of American history.
So how would the earlier publication of The Jefferson Bible have changed American history? It's impossible to know for sure, but the 1820s inaugurated a period of tremendous spiritual experiment in America: It was the age of Mormonism, Unitarian Universalism and Shakerism, among other new faiths.
There’s little doubt that many Americans, who were already fiercely independent in matters of religion, would have seen The Jefferson Bible as the manifesto of a reformist movement– call it “Jeffersonian Christianity” – focused not on repentance and salvation but on earthly ethics. Such a movement could have swept America, and also have spread to Europe, where Jefferson was esteemed.
A broad awareness of Jefferson’s work would have surely engendered a more complex view of the religious identity of Jefferson and other founders. Indeed, one of Jefferson’s most trusted correspondents while he was producing his Bible was his White House predecessor, John Adams, who in turn confided to Jefferson his distrust of all religious orthodoxy. These men were impossible to pin pat religious labels on.
Because Jefferson published relatively little during his lifetime, the appearance of The Jefferson Bible would have created a different, and more confounding, public image of the statesman as someone struggling deeply with his own religious beliefs. The Jefferson that appears behind his reconstruction of Scripture is someone who brushed aside notions of miraculous intervention and canonical faith.
As The Jefferson Bible conveys, however, Jefferson considered Jesus’ moral philosophy the most finely developed in history, surpassing the ethics of both the ancient Greeks and the Hebrews. He insisted that Christ’s authentic doctrine was marked by a stark, ascetic tone that clashed with the supernatural powers attributed to him.
“In extracting the pure principles which he taught,” Jefferson wrote in 1813, “we should have to strip off the artificial vestments in which they have been muffled by priests, who have travestied them into various forms. ... There will be found remaining the most sublime and benevolent code of morals which has ever been offered to man.”
Jefferson’s minimalist approach to the Gospels reveals an attitude that he disclosed only privately, just months before his death: “I am of a sect by myself, as far as I know."
In that sense, Jefferson the politician wouldn’t have stood a chance in the current presidential race, where faith and piety are on constant display. The political process might be more open today to candidates of varying degrees and types of belief if The Jefferson Bible were more central to the nation’s history.
The Jefferson Bible opens a window on Jefferson’s struggle to find a faith with which he could finally come to terms. It was this kind of intimate, inner search – not the outward pronouncement and establishment of religious doctrine – that the man who helped shape modern religious liberty sought to protect in America.
The opinions expressed in this commentary are solely those of Mitch Horowitz.
http://religion.blogs.cnn.com/2012/01/11/my-take-how-thomas-jeffersons-secret-bible-might-have-changed-history/
~~~~~~~~~~~~~~~~~~~~~~~~~~~~~~~~~~~~~~~~~~~~~