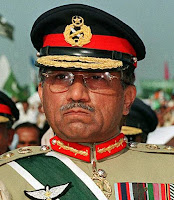 Pakistan is a perfect example of what not to do with a military junta. When Hosni Mubarak resigned from the Egyptian presidency in February, many commentators asked whether Pakistan--an unstable Muslim country outside the Arab Middle East--would go the way of Egypt, experiencing what was then thought to be revolutionary change.They should have asked whether Egypt would suffer the fate of Pakistan: a parliamentary democracy with a freely elected government but dominated by a military with a host of extraconstitutional powers.Today, the question remains as valid as it was last winter. Egypt is on course to follow Pakistan's quasi-praetorian path. There has been a change in government. Mubarak is gone. But the regime lives on through the powerful Supreme Council of the Armed Forces. Egypt's democrats can learn from the successes and failures of their Pakistani counterparts. Here are five lessons from Pakistan.

1) Don't let the military divide and rule the civilians.

In Pakistan, warring parties managed to pass a constitutional amendment that reduced presidential powers and the dominance of the Punjab province. But the collapse of a coalition between the Pakistan Peoples Party (PPP) and the Pakistan Muslim League (Nawaz) caused a political crisis in which the army had to intervene, albeit short of a coup. The army has not fully retreated to the barracks since then.

To avoid the same fate, Egypt's political parties must cooperate, leaving no vacuum for military intervention. The generals there have signaled that they want to influence the composition of a constitution-drafting Constituent Assembly. Though it has since backtracked, the military could again try to interfere with the constitution-drafting process by leveraging secular and Coptic Christian fears of Islamist influence. To keep the military at bay, it's key that the Muslim Brotherhood--which, combined with the Salafist movement, won over 60 percent of the vote--ensures that the drafting process won't be a majoritarian enterprise alienating non-Islamists.

Egypt's major political parties have real competing interests and values. But these differences should not inhibit them from ensuring that elected representatives, not the military, choose who drafts a new democratic constitution.

2) Empower parliament and improve its capacity and competence.

Pakistani politicians pronounce the sovereignty of parliament, yet its National Assembly is inefficient, has a meager attendance rate and inadequately staffed oversight committees. This has created a vacuum in Pakistan that is filled by an activist Supreme Court, agenda-driven media and an interventionist army.

Egyptian democrats should avoid the fate of Pakistan by not only bestowing parliament with real legislative, budgetary and oversight powers but also improving the capacity and competence of legislators. After Egypt's 2005 elections, the Muslim Brotherhood actively worked to enhance discussion of the federal budget and increase the competency of its legislators over policy issues through its "parliamentary kitchen." But these efforts should be expanded to include formal educational programs for legislators on policy issues and legislative strategies.

3) Selectively roll back the military's powers.

In Pakistan, the prime minister, president and army chief--known as the troika--meet informally to determine foreign and security policy. The army chief-dominated troika has contributed to political stability in the country. But it is inherently antidemocratic, not sustainable beyond the current cast of characters and offers little depth to policy making.

Egypt can avoid this kind of concentration of power through an informal civil-military consensus. Egyptian democrats should carefully select which powers they will rescind from the military. They should block the military's attempts to create a presidential system that would allow it to contain parliament. But too aggressive a rollback of the military would likely result in a backlash that could jeopardize gains made this year. A more prudent course would be to create a consensus-building national-security council led by the elected prime minister that can provide a platform for civil-military dialogue.

Since Pakistan's 2008 elections, which brought in a democratic government, the country has gone from being one of Asia's fastest-growing economies to the continent's sick man. Economic growth is stifled by poor governance: the state-owned airlines and railways are bleeding billions of dollars a year, and electricity blackouts often exceed twelve hours a day. Ninety-two percent of Pakistanis feel their country is going in the wrong direction, with inflation their primary concern.

Egypt also faces a tough economic outlook. The Cairo Stock Exchange's main index has dropped by 40 percent this year. Egypt's economy has grown by around one percent. Unemployment and inflation, causes of the revolution, have risen since Mubarak's resignation. Foreign direct investment has dropped by 20 percent. Without competent economic stewardship, public stamina for a democratic transition will be weak.

To avoid the post-transition loss of confidence experienced by Pakistan, Egypt's democrats must develop a coherent economic policy that combats corruption and puts the country back on the path of structural reform while also building jobs. They will need to privatize state-owned companies, deftly reduce subsidies, and bring back foreign investment and tourism. A technocrat untainted by association with previous autocratic governments should serve as finance minister.

5) Minority rights are key to maintaining a big-tent coalition.

In Pakistan, the fragile coalition government led by the PPP has managed to survive nearly four years in part due to concessions made with small, regional parties. Politics is the art of compromise. Some Pakistani politicians have succeeded due to clever management of coalition politics.

Egyptians should follow this example of compromise. A civilian-led constitution with an empowered parliament will require a big-tent coalition. The Muslim Brotherhood-led Freedom and Justice Party (FJP) will need to ally with the secular Egyptian Bloc and Wafd Party and guarantee that Copts and secular Egyptians do not become second-class citizens under the next constitution. While the FJP could ally with the Salafist-led al-Nour Party to push through Islamic measures, doing so risks an intractable intracivilian conflict, potentially even pushing secular politicians into the arms of the military.

The recent decision by the Muslim Brotherhood to protect churches during New Year's is a step in the right direction. But Egyptian Christians do not simply want to be a protected minority: they want to be full citizens with the same rights as Muslims.

Egypt is in the midst of a difficult and uncertain transition. Its embryonic democratic experiment could fail for many reasons. But Egyptian democrats will increase their odds of victory if they learn from the mistakes of their Pakistani counterparts. Civilian leaders must close ranks, adopt a consociational model, and isolate the increasingly feckless leadership of the armed forces.

This article originally appeared at NationalInterest.org, an Atlantic partner site.
http://www.theatlantic.com/international/archive/2012/01/5-ways-egypt-can-avoid-becoming-pakistan/251393/
OH! do not do this>>>> ‘Memogate’ Scandal - Zardari, Haqqani & Keyani