Gen David Petraeus, one of America's most prominent military officers, resigned after admitting he had had an affair with his biographer Paula Broadwell. Now the top US commander in Afghanistan, Gen John Allen, has been linked to another woman already tied to both Gen Petraeus and Mrs Broadwell.
The David Petraeus scandal Updates <<<click>>>

David Petraeus' downfall is down to his liaison with Mrs Broadwell, a former military officer, academic researcher and fitness enthusiast. She graduated from the West Point military academy, then spent 15 years in the US Army as a defence policy analyst and intelligence officer in South Korea and Germany.
In 2000 at Heidelberg Castle in Germany, she married Scott Broadwell, a flight surgeon (now a radiologist). They live in Charlotte, North Carolina, and have two sons. After Mrs Broadwell left the army, the family moved to Boston, where she enrolled at Harvard's Kennedy School of Government. There she began a career as an academic military researcher, a path that brought her into contact with Gen Petraeus.
Mrs Broadwell, now 40, met the then-lieutenant-general in 2006 when she approached him to write an academic project on his leadership style. Over the following years she went with him to Afghanistan as he took command of the Nato operation there and spent months working closely with him, before distilling her research into the glowing biography, All In: The Education of David Petraeus.
A friend of Gen Petraeus has said his affair with Mrs Broadwell only began in late 2011, after he had left the military to head the CIA. In the spring of 2012, Mrs Broadwell is said to have become jealous of another woman. She allegedly sent anonymous emails to the woman, Jill Kelley, apparently warning her to stay away from Gen Petraeus.

Jill Kelley is a Tampa, Florida socialite who reportedly hails from  Catholic Lebanese family that immigrated to Philadelphia in the 1970s.
Mrs Kelley, 37, and her husband Scott Kelley, a surgeon, describe themselves as having been friends with Gen Petraeus and his family for more than five years. 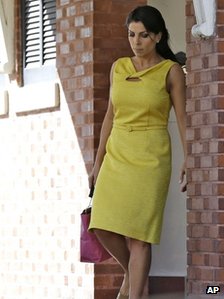 Now Gen John Allen is under investigation after being accused of sending "flirtatious" to Mrs Kelley beginning in 2010.
There is no suggestion that Mrs Kelley, a mother of three daughters, had an affair with either Gen Petraeus or Gen Allen.
Both men wrote letters in September 2011 on behalf of Mrs Kelley's twin sister, Natalie Khawam, attesting to her good character in a messy custody dispute. A judge had earlier denied Ms Khawam custody of her young son, saying she appeared to lack honesty and integrity.
In May, Mrs Kelley received threatening emails accusing her of seeking an intimate relationship with the general. FBI officials say those emails were traced to Mrs Broadwell.
In Tampa, Mrs Kelley has served as an unpaid "social liaison", helping to organise gatherings at MacDill Air Force Base, which is the home of US Central Command.
Since the Kelleys moved to Tampa, they have been involved in at least nine legal actions, according to court records. Most involve real estate transactions, including a home repossession and an $11,000 (£6,930) judgment against them in a Pennsylvania case.
Gen Petraeus was stationed there before he moved to Afghanistan to run the Nato operation. Gen Allen was deputy commander there from July 2008 to June 2011. 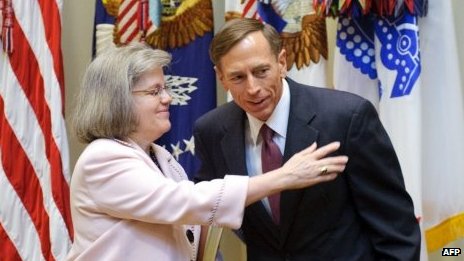 Holly and David Petraeus met in the 1970s when he was a cadet at West Point and her father was superintendent
Holly Petraeus, Gen Petraeus' wife of 38 years, was the daughter of the general in charge of West Point when David Petraeus was a cadet there.
Mrs Petraeus, who has long been an advocate for soldiers' families, has been without her husband for long periods in recent years, even testifying before the Senate about the impact of extended deployments on military spouses.
In January 2011 she was hired to run a veterans' affairs office at the newly established Consumer Financial Protection Bureau.
In that position, which was created as part of the Democrats' overhaul of financial services industry regulation, Mrs Petraeus is tasked with protecting armed services members from predatory lending practices.
Mrs Petraeus' father, Gen William Knowlton, was the superintendent of West Point and Gen Petraeus was a cadet there in 1973 when the couple met.
The couple have two adult children, including an army officer deployed in Afghanistan.
"This unrelenting pace of deployments is a retention issue," Mrs Petraeus said in 2003 after testifying before a Senate committee.
"Families will not be willing to go it alone forever with little relief in sight."
~~~~~~~~~~~~~~~~~~~~~~~``
David Petraeus' tough lesson
By Dan K. Thomasson
Probably the best advice my father ever gave me was never to write anything you wouldn't be comfortable seeing printed on the front page of your newspaper. It's not a complicated rule and should be followed by everyone with a long distance to fall. That is the classic definition of tragedy and Gen. David Petraeus fits it almost perfectly, having ended a glorious career in an inglorious fashion in the time it takes to read a few emails he never should have written in the first place. How incredible that the head of the CIA would trust his future to a device that is notoriously unsecure — the Internet? Forget about the morality or lack of it involved here. Adultery is never a justifiable act and this is not meant to do so. It is not surprising, however, that a man of his stature, under great pressure during long absences from home on the front lines of national defense, would look for creature pleasures with a smart, vital, engaging, type-A personality 20 years his junior. Dumb? Certainly. But not rare. Have you not heard of Gen. Dwight Eisenhower and Kay Summersby? That Petraeus' part-time companion turned out to be a jealous and indiscreet handful is not unusual in these situations. Ask Bill Clinton. What is shocking is that a normally cautious man who has spent a lifetime in sensitive positions would fail to recognize the danger of his actions or the pain it would cause others if discovered. It is amazing that the woman, Paula Broadwell, his devoted biographer and also schooled in intelligence matters, would recklessly challenge by email another woman she perceived as a rival for the good general's attention. The second woman read it as a threat and reported it. Hello, FBI; so long, general. The FBI discovered evidence of an affair in emails between Petraeus and Broadwell. Sexual chemistry tops caution almost every time, even among those who know what's at stake. Some reach heights that lead them to believe they are immune from the self-restraint any prudent person would follow. Others are just so caught up in the emotion that they become careless. Petraeus may have been a little of both. If those close to Petraeus noticed the electricity between the general and Broadwell, which they reportedly did, they apparently failed to warn him — not unusual for subordinates when dealing with superiors at that exalted level. In fact, the head of the FBI and the attorney general of the United States blinked several times before telling the national intelligence director and the president. Agents already had determined it was a matter not involving national security. As a news executive, I spent more than a year lecturing on libel, slander and other subjects, including Internet security. The message delivered repeatedly was don't trust emails. My father's advice came through loud and clear. What a hard lesson Petraeus has had to learn. Dan K. Thomasson’s column is distributed by the Scripps Howard News Service. From The Detroit News: http://www.detroitnews.com/article/20121114/OPINION01/211140308#ixzz2CDKufVdA People are now also asking, if Petraeus didn't share classified information with Broadwell, why did he have to resign? What's the big deal?

In the military, the strict rules against marital infidelity have been justified by the claim that affairs leave people vulnerable to blackmail. (It was the same claim used to justify the irritating 'Don't Ask Don't Tell' policy towards homosexuality, too.) Now this has never rung quite true to me. Even someone who isn't having an affair but has a spouse and children is vulnerable to blackmail simply to protect their family. By that logic, why not go one step further and just demand that none of our public figures have relationships at all? At least it would stop us having to mentally picture John Major and Edwina Currie in flagrante again.
We might even go so far as to take a leaf from our Continental cousins and stop thinking of extramarital dalliances as such a big deal. Affairs, acknowledged or not, are rarely a good indicator of how effective someone is at their job. We've long acknowledged that marriages for love followed by a lifetime of sexual fidelity is not the historical norm. As Catherine Hakim notes in her book The New Rules, "The time has come, alongside the technology, to redraw the rules of marriage for the 21st century."
There is one silver lining of this Petraeus mess for us culture vultures. I'd pretty much had it with Homeland - the unlikely plot twists, the ill-advised affairs, the thought that the CIA would use unsecured connections to transit classified information… until this affair broke. Now I see that the shoddy planning, bed swapping, and poor security measures are exactly how things really go down at Langley. But give me David Harewood over David Petraeus any day - now there's a man worth going 'All In' for.