Given the shifting geopolitical landscape and the rising economic power of South and East Asia, it is becoming increasingly necessary to open new channels of interfaith dialogue and cross-cultural understanding between Buddhism and Islam. Massacres of the Muslim Rohingya people in Buddhist-majority Burma and tensions between the religiously divided regions of Indian-occupied Kashmir illustrate the lack of understanding between adherents of these two religions.

The major obstacle to dialogue between Buddhism and Islam is theological. Monotheism is central to Islamic doctrine, while most denominations of Buddhism consider belief in the divine to be irrelevant to one's own quest for nirvana. However, there are other commonalities between Buddhism and Islam that can serve as foundations for constructive interfaith dialogue. Specifically, both religions have similar perspectives on both proper action and the value of inter-religious dialogue that can contribute to greater inter-religious understanding and respect.

One example is the concept of consequences for one's right or wrong actions. For Muslims, all humans will be judged for their right or wrong actions after their deaths on the The Day of Judgment, and the Quran states that, "Whoever does an atom's weight of good will see it; and whoever does an atom's weight of evil will see it" (Quran 99:7-8). Indeed, those who have a higher weight of good deeds will enter eternal Paradise, while those with a higher weight of evil deeds will reside in Hellfire (Quran 101:6-11). The desire to achieve residence in Paradise after death therefore motivates Muslims to act virtuously while living on Earth, a temporary existence inferior to that of Paradise.

This belief is very similar to the Noble Truths of Buddhism, which state that all life is transitory and inevitably contains suffering. For Buddhists, the only way to escape suffering is to achieve nirvana through eliminating one's personal attachments and following the Eightfold Path. One of the main components of this path is correct action, which is governed by karma. Similar to the beliefs in Islam, karma indicates that every good action will eventually be rewarded, while every bad action will be punished. Some schools of Buddhism also state that after death, souls with good karma will enter one of several hierarchical Heavens corresponding to the person's degree of goodness, while those with bad karma will enter one of many Hells corresponding to the person's degree of evil. Buddhism diverges from Islam by stating that these afterlives are transitory; Buddhists believe in reincarnation, and souls must continue the inevitable cycle of samsara (birth, death, and rebirth) until they can be fully released from the cycle by attaining nirvana. Since nirvana is a step beyond the highest Heaven, good works are therefore important for Buddhists because they condition the soul for achieving the ultimate goal of release from samsara. Clearly, both Muslims and Buddhists believe that every action has a consequence, and it behooves followers of each faith to pursue good works.

In addition to comparable attitudes about good works, Islam and Buddhism both value interactions with other religions. Although Islam does not directly share a common heritage with Buddhism like it does with Judaism and Christianity, there are still theological motivations for Muslims to dialogue with Buddhists. For example, the Quran states, "If Allah had so willed, He would have made [mankind] a single religion [or community], but (His plan is) to test you in what He hath given you: therefore, strive to race each other in all virtues" (Quran 5:48). For many Muslims, this verse implies that God deliberately created diversity among mankind's nations in order to foster righteous action and dialogue across difference. By understanding the religious other, Muslims can become motivated to strive for good works and attempt to metaphorically "race them" in that pursuit.

Similarly, Buddhists value dialogue with other religions in a pluralistic sense, and believe that there is inherent truth in all pathways that relieve human suffering. Correct speech is another component of the Eightfold Path described above, and the Buddha emphasized speaking well to all people, regardless of their religion. His Holiness the 14th Dalai Lama is a great advocate of interfaith dialogue in the modern world, and even goes as far as to say that it is better for people to find what is best in their own religions than to convert to Buddhism. Since Buddhists define their beliefs as guidelines and a pathway rather than a dogmatic system of beliefs, it is very common for people to incorporate Buddhist values into their practice of other beliefs, and vice-versa. The various schools of Buddhism differ on certain issues, and often have commonalities with other religions. For example, the Pure Land school of Buddhism believes that after people achieve nirvana, they enter a Paradise similar to that described in Abrahamic traditions.

Muslim-Buddhist dialogue may be difficult, but it is becoming increasingly necessary as tensions between Muslims and Buddhists worldwide escalate and East Asia's regional importance grows. Islam is the world's second-largest and fastest growing religion, and the influence of Muslim leaders and countries seems likely to increase even further in the near future given the Arab Spring and the growth of Turkey as a regional power. Buddhism is the fourth-largest religion in the world with approximately 500 million adherents, and also continues to influence cultures on many continents due to its widely applicable philosophy and beliefs. Although these two religions may be divided by complex theological questions, inter-religious dialogue focused around morality, ethics and values can be an extraordinary avenue for intercultural exchange.
By Aamir HussainMuslim Interfaith Activist:
http://www.huffingtonpost.com/aamir-hussain/foundations-for-muslim-buddhist-interfaith-dialogue_b_3084696.html
Related:
Updates on Buddhist extremism >>>


Peace-Forum: Genocide, Ethnic Cleansing of Muslims in Myanmar ...
... the genocide of the Muslims of Myanmar wherein the Buddhists extremists had been carrying out massacre of the Muslims in minority and were setting their homes and colonies ablaze under the government patronage.
Peace-Forum: Sri Lankan Muslims under threat
Then, when President Mahinda Rajapakse's brother, defence secretary Gotabaya, was facing difficulties in finding enough recruits for the army, a group of monks fanned out across the Buddhist areas to motivate thousands of young men. These recruits were assured that they would not lose ... The recent execution of a young Sri Lankan maid in Saudi Arabia on flimsy charges provided more ammunition to the extremists. None of this is good news for the peaceful and ...
Peace-Forum: Ethnic cleansing of Muslims in Burma Mayanmar
Rioting began on Wednesday in the now ash-covered town, located 360 miles north of the commercial capital Rangoon, after an argument between a Muslim shopkeeper and his Buddhist customers erupted into a street brawl ...
Peace-Forum: We Condemn action of Rebel Buddhist Group in ...
... Christians from celebrating Christmas, sources said. The United People's Democratic Front (UPDF), which has demanded that Christian converts return toBuddhism, threatened tribal Christians of at least seven churches in Khagrachari district, some 300 kilometers (180 miles) southeast of the Bangladeshi capital, Dhaka. .... Extremism is not Islamic · I have been defending Islam, says Dalai Lama; Rece... Religion goes Green? An Agnostic Jew talks about her...
Peace-Forum: Bad days in Burma
Nobody disputes the fact that about 100,000 Rohingyas (out of a population of 800,000) are now internal refugees in Burma, while others have fled across the border into Bangladesh. As you would expect, the Buddhist monks ...


Strong Similarities Between Buddhism and Islam>>>>

Similarities Between Islam And Buddhism

Buddhism and Islam are two major religions of the world today, which traces back to the 6th century BCE and the 6th century CE respectively. Based on the teachings of Lord Buddha (Northern India) and Prophet Mohammed (Arabia), Buddhism and Islam deals with a new way of life, which gives a being freedom from confusion and disillusionment. Both the religions require practice and faith in self. Both of them have different methods of worship, but on the whole talks about similar facts.
Similarities Between Buddhism And IslamEternal Life
The Concept Of Universe
Humanity 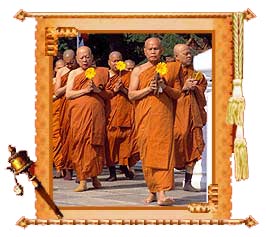 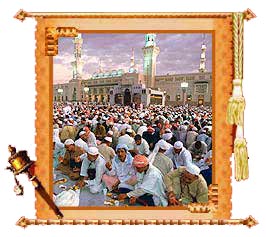 The Concept of World
Conclusion

Most of the scholars in Islam THINK that Lord Buddha is a prophet of Allah because he never said to worship him (his idols) he just said to FOLLOW HIM not to WORSHIP HIM and he also mentions the arrival of Prophet Muhaamadh (Maithria Buddha) and also gives his appearances and his qualities as well.
Another reason for the doubt that Lord Buddha is the prophet of Allah is that because ONLY 25 NAMES OF PROPHETS ARE MENTIONED IN THE GLORIOUS QURAN BUT ALLAH SAYS IN THE QURAN THAT HE HAS SENT 124000 PROPHETS TO EACH AND EVERY TRIBE AND EVERY NATION TO GUIDE MANKIND BUT ITS VALID ONLY FOR THAT PARTICULAR PERIOD AND THAT PARTICULAR SET OF PEOPLE. So the conclusion is that Buddhism might have been a very much similar religion to Islam if its scriptures were not changed from time to time because buddhism has been revealed before more than 2600 years ago.AND THERE IS OVER 90% PROBABILITY OF LORD BUDDHA HAD PREACHED HIS FOLLOWERS AN EARLIER VERSION OF ISLAM..
http://religiousaccuracy.blogspot.com/2012/06/buddhism-and-islam-are-two-major.html#.UW78MaJ-aOw