Sahelistan: the beginning of a new war

Inside Story - Berbers in North Africa by aljazeeraenglish

ARE the Western powers blindly plunging head on into a new war against forces more determined, better organised and higher equipped than those they faced in Iraq and Afghanistan? The talk of the town here these days is a newly published book, `Sahelistan` by a writer who, according to his own admission, is essentially an `adviser` to investors in the most inaccessible regions of the world.
Samuel Laurent says his visits between early 2012 and early this year into the very heart of Sahelistan was supposed to be top secret. But the things he witnessed and the people he met there convinced him that Western leaders are making fatal blunders at the risk of paying enormous prices sooner or later; so it became incumbent upon him to talk about the matter publicly. But, before we proceed any further, let`s make sure we agree on what we mean by Sahelistan; we`re talking here of a 7,500 kilo-metre-wide ocean of sand and bare rocks in the central Sahara, with Morocco, Algeria, Tunisia and Libya in the north, and Mali, Niger, Chad and Sudan in the south.

This is a desolate no man`s land where drugs and weapons traffickers and armed bandits have ruled for centuries.
The southern Libyan side of the Sahara plays a major role in the shaping of Sahelistan as a refuge as well as training ground for extremist forces. In his final days in 2011, when the French air force planes were heavily bombarding Libya, the late Col Muammar Qadhafi had spokenrather prophetically: `Once I am gone, Libya will turn into the headquarters of a new war against Europe and America. 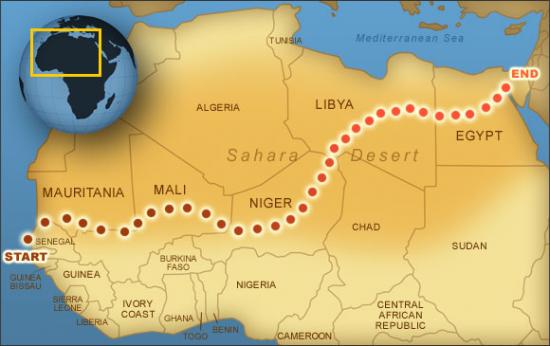 Today, affirms the book, the truth about the Libyan version of the `Arab Spring` amounts tragically to vengeful killings, arbitrary arrests, tortures, rapes and genocide as the order of the day. Nobody rules the country and thousands of armed men, including nomad Tuareg rebels, are rapidly settling down in different parts of Sahelistan and posing resistance to Western influence.

Even after the Egyptian, Tunisian and Libyan revolutions, says the book, the fast spreading power of AlQaeda was never fully grasped by the West and the media merely started taking a somewhat half-hearted interest in the subject following the assassination of US ambassador Christopher Stevens in Benghazi on the wellchosen, symbolic date of Sept 11 last year.Adamantlyrefusing to learn a lesson from the Libyan disaster, the French forces carried out vast military operations in northern Mali early this year. Although President FranÃ§ois Hollande resisted the temptation of declaring `mission accomplished` Ã  la George Bush, the French media celebrated the killing of Mokhtar Belmokhtar, an Al Qaeda-linked military leader who had lost an eye during the Afghan war.

Barely a month ago, on May 23, an army base and a uranium treatment plant run by the French Areva enterprise in Niger were hit by forces close to Al Qaeda, causing the death of at least 12 soldiers. The supposedly `eliminated` Mokhtar Belmokhtar reappeared and claimed responsibility, promising to hit again at a time and place of his choice along the length and breadth of Sahelistan.

This hardly is an empty threat; the militants, rapidly forging alliances with local insurgentsand extremist groups like Ansar al Deen and Al Qaeda in Islamic Maghreb (AQIM), are today much deeply entrenched than ever.

Their ample resources come from arms and drugs trafficking ofcourse, but also considerably from cash ransoms paid by Europeans and Americans themselves for the release of their secret agents kidnapped while gathering intelligence in the guise of human rights workers.

In a region where young men are desperate to make a living, the masters of Sahelistan are using their easily earned money to offer relatively comfortable salaries to recruits, together with military training and Kalashnikov rifles.

The most surprising feature of Samuel Laurent`s book are the interviews of the jihadists themselves. Contrary to the widely accepted clichÃ© of their being stubborn, blind fanatics, one is surprised by the lucid reasoning of their arguments. `Libya is neither Iraq nor Afghanistan,` says Mohammad el Gharabi, head of a clandestine military training camp not far from Benghazi, `and no Western powers are going to appoint a Noori alMaliki or a Hamid Karzai here.

As one digs deeper, one discovers a patient, wide-ranging plan projected far into the future for gaining power north and east of Sahelistan through political and military means (this already seems to be a reality in Tunisia, Libya and Egypt); then cross the Mediterranean to conquer Europe.

Does this sound crazy? Count AndrÃ© de la Roche, a retired diplomat who has spent a number of years in the Middle East, takes Samuel Laurent`s book seriously. He says the mighty Roman empire was brought to its knees by Christians coming from south of the Mediterranean and, should one need another proof, the Arabs conquered Spain in 711 to rule there for the next eight centuries.

The writer is a journalist base i in Paris. ZafMasud@gmail.com