The Greeks who worship the ancient gods

The summer solstice, 21 June, is one of the most important dates in the calendar for many followers of ancient religions, and it's a special time for people in Greece who worship the country's pre-Christian gods.

"I love the energy this place has," says Exsekias Trivoulides who has pitched his tent on what he considers to be the holy site of Mount Olympus.
Trivoulides is a sculptor who studied art history and classics, and these days, he is living his passion.
Along with a few thousand others he is taking part in the Prometheia festival, which celebrates the ancient Greek hero Prometheus, who helped humans by stealing fire from the gods.
It's the most important annual festival for followers of The Return of the Hellenes - a movement trying to bring back the religion, values, philosophy and way of life of ancient Greece, more than 16 centuries after it was replaced by Christianity.
These people consider Greece to be a country under Christian occupation.

Tryphon Olympios leads many of the ceremonies
"People want to identify with something in the past - where they came from - so as to know where they are going," says Trivoulides. "If you don't know your past, you don't have a future.
"It's going back to the roots. It makes me feel the continuation through the millennia."
The festival begins with six runners - in full Greek battle gear - racing the six miles (10 km) up Mount Olympus, home of the gods, their shields and long spears clanking as they go.
But as they set out from the small village of Dion at the base of the mountain, passersby hardly seem to notice - they are used to them.
It's a telling sign of how far they have come already, in a nation where 98% of the public are said to identify themselves as Orthodox Christian.
In 2007, an official of the Orthodox Church described them as, "a handful of miserable resuscitators of a degenerate dead religion".
These days, relations have improved, according to Tryphon Olympios, the philosophy professor who founded the Return of the Hellenes movement in 1996.
"They have understood that we are not dangerous and we are not pagans and Satanists," he says.
"We are peaceful people and come with ideas that are useful for society."
The economic crisis in Greece should be a time of reflection about the values that should govern a society, he says.
The Return of the Hellenes focus on the 12 main gods of ancient Greece - the dodecatheon.
They don't actually pray to Zeus, Hera and the others. They see them as representations of values such as beauty, health or wisdom.
The followers are an odd mix. There are New Age types who revere ancient traditions, leftists who resent the power of the Orthodox Church, and Greek nationalists who see Christianity as having destroyed everything that was truly Greek.
As the modern-day ancients relax in their camp at the base of the mountain, a few sell philosophy books, CDs, food and jewellery. Some wear modern clothes, others tunics, and a few sport a wreath.

Over the course of the three-day event, there are public prayers, two marriages, and a naming ceremony, where followers choose an ancient name - like Calisto, Hermis or Orpheus - and "cleanse" themselves of their modern Christian ones.
None of these rituals is officially recognised by the Greek state. The biggest bone of contention for those involved is that they are prevented from praying at ancient temples, and struggle to get permission to build their own temples, which in Greece requires the approval of the local Orthodox bishop.
In an attempt to formalise their status, the umbrella group the Supreme Council of Ethnikoi Hellenes is campaigning to get their form of ancient worship classed as an "ethnic religion" of Greece.
But it's an idea few Greeks would support, says Victor Roudometof, a professor of sociology at the University of Cyprus, and an expert on religion in Greece.
Although many Greeks only actually attend church a few times a year, the Orthodox religion is a "cornerstone" of Greek identity, he says.
Those who worship the ancient Greek gods are widely regarded as no more than "interesting curiosities", he adds.
Experts in the study of the ancient world also tend to be dismissive.
"I don't think you can roll the clock back," says Robert Parker, a professor of ancient history at the University of Oxford.

"You can't import an ancient religion into a completely different environment and social system."
He has two words to describe those who attempt to do so - the first is "kooky", the second, "ridiculous".
Parker points to historical inconsistencies. Prometheus, for example, was only a relatively minor figure in ancient Greek religion, he says, and never had a major festival dedicated to him.
Other historians say these groups are idealising an ancient religion that had little to do with ethics or morality.
"The whole point of it is that you keep the gods sweet - you scratch their back, they will scratch yours," says Peter Jones, co-founder of Friends of Classics.
"You establish a quid pro quo relationship... It is simply an acknowledgement of the gods, in the hope that the gods will help you," he says. "Values and virtues are entirely meaningless in ancient terms."
Animal sacrifice was by far the most important part of any ancient Greek religious ritual, with the throat of a live bull slit with a knife at the altar outside the temple.
But most of the revivalists make simple offerings of flowers, fruit, milk and honey.
The ancient Greeks were also famed for drama and tragedy, and a night-time torch-lit theatrical production Prometheia is the main event at the Mount Olympus festival.
The performance combines classic drama with lessons about what the ancients have to teach us, all these centuries later.
Followers are all too aware they are seen as outsiders by some in society, but insist that attitudes in Greece are changing.

"In the beginning, they were making jokes, then they were ignoring us, now they are interested," says tax manager Persis Argyros, who has been involved since the start of the movement. "We became too big to ignore."
No-one has accurate figures for the number of followers, but numbers have swelled since their first gathering on the mountain 17 years ago, and the movement claims to have hundreds of thousands of supporters.
It's clear they are in their element here on Olympus. After the show closes, the Hellenes dance and frolic under the moonlight. 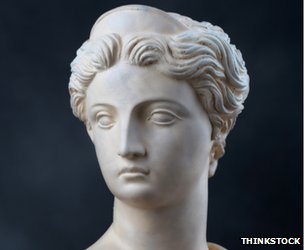 In Greek mythology there were 12 deities who lived on Mount Olympus
Gods - Apollo, Ares, Dionysus, Hermes, Hephaestus, Poseidon, and Zeus
Goddesses - Aphrodite, Athena, Artemis (above), Demeter, and Hera
Matthew Brunwasser was reporting for The World, which is a co-production of the BBC World Service, PRI and WGBH . Additional reporting Cordelia Hebblethwaite: http://www.bbc.co.uk
Related:
Free-eBooks: http://goo.gl/2xpiv