Angola has officialy banned islam shuts down mosques: Is this the beginning? Angola president said: ‘This is the final end of Islamic influence in our country’ Islam as a ‘sect’ which is banned as counter to Angolan customs and culture.

Officials at the Angolan Embassy in Washington, D.C., denied Monday that the nation has banned Islam and dismantled mosques, disputing published news accounts and stating that they cannot authenticate comments reportedly made by top Angolan officials that support the claims.
Updates, latest news about Angola >>>>>>
A number of news outlets have reported that Angola has “banned” Islam and started to dismantle mosques in a bold effort to stem the spread of Muslim extremism.

Weekly French-language Moroccan newspaper La Nouvelle Tribune published an article on Friday sourcing “several” Angolan officials, including the Southwest African nation’s minister of culture, Rosa Cruz, who reportedly offered the following remarks, which have been translated from French: “The process of legalization of Islam has not been approved by the Ministry of Justice and Human Rights. Their mosques would be closed until further notice.”
African economic news agency Agence Ecofin wrote that Cruz made the statement at an appearance last week before the 6th Commission of the National Assembly. The website goes on to note that, “According to several Angolan newspapers, Angola has become the first country in the world to ban Islam and Muslims, taking first measures by destroying mosques in the country.”
Even Angola President José Eduardo dos Santos has weighed in on the controversy, as he was quoted in Nigeria’s Osun Defender newspaper on Sunday as saying, “This is the final end of Islamic influence in our country,” according to the OnIslam.net report.
The reported comments by Cruz and Santos echo the stance of the governor of the country’s Luanda province, Bento Francisco Bento, who reportedly maintains that “radical Muslims were not welcome in Angola and that the government was not ready to legalize the presence of mosques in the country,” according to a La Nouvelle Tribune summary of Bento’s take on the issue.
In a physical extension of the officials’ sentiments about Islam’s place in Angola, La Nouvelle Tribune said that a minaret of an Angolan mosque was dismantled last October, and that the city of Zango “has gone further by destroying the only mosque in the city.”

The emerging reports about Angola “banning” Islam and dismantling mosques point to the anti-Islam sentiments held by many in the nation’s citizens, but they could not immediately be independently verified by International Business Times.

Angola is a majority-Christian nation of about 16 million people, of whom an estimated 55 percent are Catholic, 25 percent belong to African Christian denominations, 10 percent follow major Protestant traditions, and 5 percent belong to Brazilian Evangelical churches. Only 80,000 to 90,000 Angolans are Muslim,
http://www.nationalturk.com/en/is-this-the-beginning-angola-has-officialy-banned-islam-shuts-down-mosques-africa-breaking-news-44906
~~~~~~~~~~~~~~~~~~~~~~~~~~~~~~~~~~~~~~~~~~~~~~~
Britain's silence on Angola is deafening
Despite meeting all the criteria for a great news story, the British media ignore this oil-rich state. I blame our colonial history. Lara Pawson 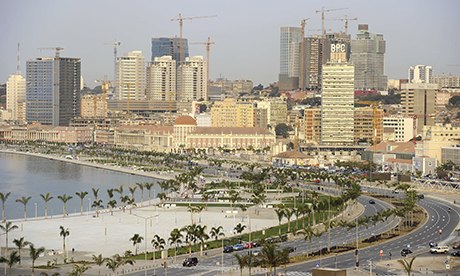 Oil-rich Luanda has been governed by the MPLA for 38 years.
What do Britain's journalists look for in a story from the African continent? How about a 71-year-old dictator who's presided over an oil-rich country for 34 years, lining his family's pockets with billions of dollars, and who extinguishes his opponents by torturing them to death and feeding their bodies to crocodiles? It's almost too good to be true – a cliche of the African state to have foreign correspondents drooling. But despite possessing all the ingredients of a thoroughly gripping news story, British media interest in Angola's contemporary political stage remains close to zero.

Today, in the Angolan capital of Luanda, a funeral will be held for 28-year-old Manuel de Carvalho, known as Ganga, who was allegedly shot dead by the presidential guard on Saturday morning. Ganga had been distributing leaflets about the killing of two former Angolan soldiers, António Alves Kamulingue and Isaías Sebastião Cassule, who were abducted in May 2012 while organising a demonstration for war veterans demanding payment of their pensions. Information leaked last week to the independent news website Club-K revealed that the two former soldiers had been tortured in police custody before being killed. One of them was then thrown to crocodiles.

Hours after Ganga's death, hundreds of Angolans took to Luanda's streets in a demonstration organised by the main opposition party, Unita, to demand justice for the deaths of Kamulingue and Cassule. In response, armed police, supported by reinforcements in helicopters, used tear gas to break up the protest. Hundreds of people were arrested and at least one was shot and injured.

Appalled by the authorities' repeated use of excessive force, this weekend saw many Angolans, both at home and abroad, expressing their anger and also their shame. One Angolan suggested that the abbreviated name of the MPLA ruling party (Movimento Popular de Libertação de Angola) should now stand for Matamos o Povo que tenta Lutar pela liberdade de Angola (We Kill the People who try to Fight for the freedom of Angola).

From London, I spread word of the day's events, emailing my networks and engaging in the online debates. Later on Saturday evening, at a private view at the Victoria Miro gallery in one of London's most exclusive neighbourhoods, I reflected on the links between Britain and Angola, and on the chasm that distinguishes the ease of my daily life from that of my friends in Luanda.

Disco Angola is an exhibition of six photographs by the Canadian artist Stan Douglas. Posing as the work of a 1970s photojournalist, Douglas's series of staged images juxtapose New York's disco scene with the moment when Angola swivelled from liberation war to civil war. In A Luta Continua, 1974, a slender woman in a green T-shirt and flares stands in front of a brick building painted with the MPLA flag and its motto, "A Luta Continua, Vitória é Certa" (The fight continues, victory is certain). Sipping champagne, I grimaced at this idea of the MPLA, which began its life as a movement for the liberation of the people. I also grimaced at myself, nibbling canapes in Mayfair while pondering the miserable events in Luanda.

Coincidentally, it was at the gallery that I learned of the BBC's Reporting Africa seminar, which took place on Monday this week. Also dubbed the "impartiality seminar", the chairman of the BBC Trust, Lord Patten, invited informed and interested parties to give their views on whether the BBC's coverage of Africa is "duly impartial and reflects the full range of views and voices".

I've long moaned about the BBC's idea of Africa, and the way its star presenters tackle stories coming out of the vast, complex continent. But in the case of Angola – one of Africa's most significant economic and military players – the failure of the BBC has little to do with impartiality. Currently, there is no BBC reporter based in Angola at all. Two years ago, "as a result of cuts", it also closed down the Portuguese for Africa department. I've given up asking why, however I'm certain that our colonial history and our very British attitude to language remain influential: "Portuguese, isn't it?". Of course, if Saturday's events in Luanda had taken place in Harare, we'd never hear the end of it – and questions of impartiality might become more pertinent. For the time being, if Lord Patten is serious, he should put aside a salary for an Angola-based reporter to live and work in the country: not because it's an African country, but because of what is happening to the people who live there and what this may mean for one of the world's longest-serving rulers.
By Lara Pawson , theguardian.com
http://www.theguardian.com/commentisfree/2013/nov/27/britain-angola-silence-british-media-colonial
~~~~~~~~~~~~~~~~~~~~~~
Comments/Appeal

If you are concerned about Pakistan and want to do some thing, find more at the link below:
http://peace-forum.blogspot.com/2013/11/pakistan-quagmire-basic-dialogue.html