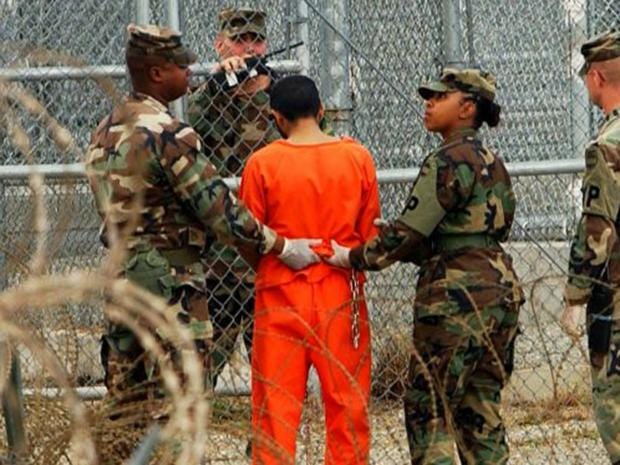 Almost half the remaining inmates are Yemeni, but I have to say that I don’t remember many Yemenis in Osama bin Laden’s camps – and I met the man twice in Afghanistan

They could go on hunger strike. They could talk to the International Red Cross. Their wretched trials could be witnessed by journalists. Their utterly illegal detention – under international law, that is – was known about, and widely condemned as an outrageous and flagrant breech of human rights. But they couldn’t be waterboarded.

The fact that the CIA thugs didn’t get their hands on them – or not as far as we know – must be the one charitable thing to come out of Guantanamo, whence a dozen extra prisoners are to be released, according to the Pentagon. 91 still to go. And oh yes, one of the dozen is a Yemeni who has been on hunger srike since 2007 and has lost half his body weight. So that just shows you. Go on hunger strike, and you get released.

The Americans don’t want anyone dying on hunger strike;  Tariq Ba Odah has been force-fed daily --strapped down, a rubber tube forced inside his nose and a liquid supplement pumped into his stomach.  Sounds a bit like torture to me.  But that’s how it goes at Guantanamo.  When there’s no rule of law, you’ve got to keep these guys alive.
No rules, no law. Remember how the bad guys picked up on this? Remember how al-Qaeda and Isis used those orange jumpsuits for their prisoners, how they dressed up their inmates before butchering them?  I can’t recall any US official commenting on that particular theatrical prop. Because this would suggest, wouldn’t it, that a theatrical prop is exactly what it was at Guantanamo - a method of humiliating prisoners, of flaunting their imprisonment.

And then there were the obviously flawed charges - I can think of a bunch of Bosnians locked up to no purpose and then handed back to Bosnia, not to mention an Afghan so old he was obviously senile and let us not forget a few Brits, too – and then a few men who did indeed return to ‘active duty’.  Because the problem is that by putting the ‘guilty’ along with the ‘innocent’ – I use the quotation marks advisedly – you make everyone innocent.

And this is the point, isn’t it? By including men of violence with men who would never commit violence, you both contaminate the innocent and cleanse the guilty. This is what George Bush did. This is what the Americans did.  No wonder Barack Obama wanted to close Guantanamo. He saw in it something iniquitous:  he saw in it the staining of a whole group of people – mainly Muslim, of course, often brown, even black people – who were imprisoned outside the law. Indeed, the law didn’t even get a look in.

‘Illegal combatants’ was the phrase, I seem to recall.  Illegal – as in ‘non-legal’.  And of course, that’s how Isis and company treated their truly innocent hostages.  They shrewdly understood that the final humiliation was to dress up their victims in the same clothes as the Guantanamo men – to make them equally ‘guilty’, equally bad, equally horrific.  That is George Bush’s legacy to us.

Now let’s go back to Ba Odah, who was taken to Guantanamo in 2002 – that’s fourteen years in prison, for heaven’s sake – but he can’t be sent to his home (Yemen, of course) because of a congressional ban on repatriations to Yemen.  And he’s one of 41 Yemenis who can’t be transferred there.  Incredible! That’s almost half the entire prisoner roll-call in Guantanamo.
Now let me get this right.  When they were sent to the Cuban camp, these were the worst of the worst, the bad guys, the dudes in the black hats.  And now it turns out that the Yemenis were the worst of the worst.  But I have to say that I don’t remember many Yemenis in Osama bin Laden’s camps – and I met the man twice in Afghanistan – so how come there are so many in Guantanamo?

True, there were Egyptians, Algerians, Tunisians, Saudis (bin Laden was one of them) and Moroccans.  But Yemenis?  Well, I guess the Saudis are killing a lot of them right now (the Shia variety, needless to say, for Ba Odah’s faith is commonly believed to be Sunni).

But then again, we come back to the fact that the Saudis are the principal supporters of the Wahhabi Salafist Sunni faith whose religion is espoused by the Taliban and Isis (and a lot of Gulf states).  And if we’re going to name the bad guys, maybe we should be talking about some ‘folk’ (a Bushism, by the way) who live in the Kingdom of Saudi Arabia as...  Oh hell no, let’s not go down that road.