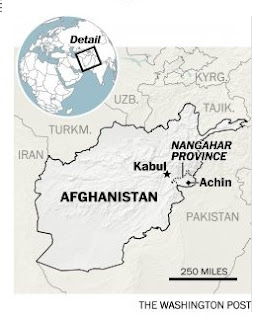 U.S. drops 'Mother Of All Bombs' on ISIS: America's most massive non-nuclear weapon is used for first time in combat on caves in Afghanistan


View comments
The United States has dropped its largest non-nuclear weapon after it targeted ISIS a network of caves and tunnels in eastern Afghanistan.
U.S. forces used a GPS-guided GBU-43 bomb, which is 30 feet long and weighs a staggering 21,600 pounds.
It is known as the 'Mother Of All Bombs' – a play on 'MOAB,' an acronym that stands for 'Massive Ordnance Air Burst.'
A crater left by the blast is believed to be more than 300 meters wide after it exploded six feet above the ground. Anyone at the blast site was vaporized.
President Donald Trump told reporters at the White House that he was 'very, very proud' and called the operation 'really another successful job. We're very, very proud of our military.'
The Pentagon is denying that the attack was a revenge strike despite the fact that it came in the same area of Afghanistan where a Green Beret soldier was killed on Saturday.
Staff Sgt. Mark De Alencar, of 7th Special Forces Group, was cut down by enemy small arms fire while his unit was conducting counter-ISIS operations.

The GBU-43 Massive Ordnance Air Blast (MOAB) bomb is one of the most powerful weapons ever created.
The MOAB weighs in at more than 10,000 kilograms and contains a huge 8,164 kilograms of explosives.

The Air Force calls it the Massive Ordnance Air Blast bomb but it was nicknamed “Mother Of All Bombs” because of its acronym.
Its blast is equivalent to 11 tons of TNT. By contrast, the nuclear weapon dropped on Hiroshima had a blast yield of 15 tons of TNT.

The first time it was ever used in warfare was in a US Air Force attack where it was dropped on a cave complex believed to be used by ISIS fighters in the Achin district of Nangarhar province in Aghanistan.
It was designed by the US Air Force in the run up to the 2003 invasion of Iraq. It was designed to scare Saddam Hussein’s troops into surrendering through psychological warfare.

Causes of conflict between Islam and the USA , West >>>