Causes of conflict between Islam and the USA , West 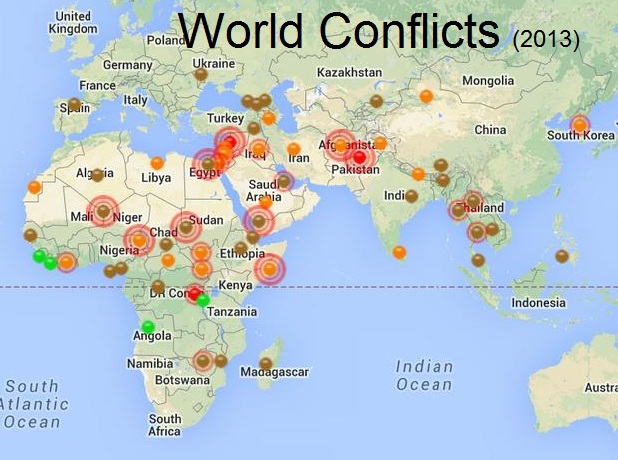 Why Islam has not undergone culture reform?  His answer: Muslims have been on the defensive for hundreds of years, their enemies continually threaten them and Westerners have never given Muslims an opportunity to think. They have always bombarded the Muslim world with their industrial power, scientific and technological capabilities and with their capacity to rule and dominate the world. They have never let it develop and examine itself. Writes Robert Fisk of The Independent.
Fisk argued the US policy on Islam is based on enmity, asking: Why is the US in Iraq, the Middle East, Kazakhstan, Uzbekistan, Pakistan, Germany, Turkey and Greece? Why are there US soldiers all around the world, beyond the US boundaries? What do they intend to do there? He made a comparison between the number of soldiers involved in the Crusades in the 12th century and the number of US soldiers currently deployed in the Middle East. The result is unbelievable: currently, the number of the US soldiers in the Middle East is twice the number of the soldiers involved in the Crusades. (Vatan newspaper, May 16, 2007).

Whether you like it or not, there are serious conflicts between Islam and the West. Without delving into the real causes of these conflicts, a fresh start does not seem likely:
(1) The West is exerting control over the Muslim territories where one-third of the world's energy resources are located, as well as exerting control over energy transfer routes. Muslims are denied ownership of their own natural resources.
(2) The primary obstacle to change in the Muslim world is the existence of oppressive regimes. The great majority of the population is young, desperate and unemployed and millions are seeking better education and health services, fair income distribution, freedom of expression and the right for a free opposition, in short, more humane conditions. However, these oppressive regimes are supported by the US and Europe. Yet, Western regimes and the media tend to portray the Islamic Salvation Front (FIS), Hamas, Hezbullah and the Muslim Brotherhood, all of which advocate free elections, democratic participation and parliamentary regimes as "extremists" and the autocracies, dictatorships and kingdoms as "moderates." Thus, one can conclude that for Westerners, "moderates" are those who do not raise objections to the Western presence in the region while "extremists" are those who do.
(3) Israel, which was mounted in the heart of the region, has been occupying lands for nearly 70 years and raining hell on the lives of Palestinians, but despite all the atrocities it commits, it gets unconditional support from all Western countries. The Palestinian issue is the "mother of all issues." This issue will not be settled unless the Israeli occupation ends, Palestinian refugees return to their own lands, Israeli settlers are stopped and the destruction of the Masjid al-Aqsa is stopped.
(4) Islam and its practitioners are being "othered" in a planned and intentional manner, and they are demonized through exclusion from the global system. Every day we face a new definition and another campaign for defamation: fanaticism, fundamentalism, political Islam, integrism, radicalism, Islamophobia, Islamofascism, reactionaryism, conservatism, extremism, Islamic terror, etc.
(5) The West imposes its culture and its lifestyle; it urges governments in Muslim countries to implement policies to ensure this, and it does not enter into dialogue on a paradigmatic level. It manipulates the social and cultural textures of Muslims without allowing them to change in their natural courses.


These are real conflicts. These are at the heart of the conflicts. On one side of the cleavage caused by these issues is the West, and on the other side is the Muslim world. Russia and China intervene in the Muslim world only from a political and strategic perspective. On the other hand, the West meddles with the Muslim world in every aspect. If the West really wants to make peace and coexist with Islam, it must pull out its occupation forces, it must stop supporting oppressive regimes, it has to make sure that Israel withdraws to pre-1967 borders and it must respect Islam and the lifestyles of Muslims.