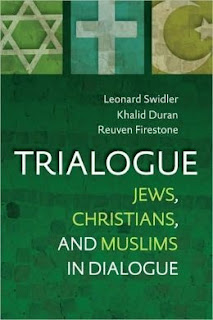 Descended from a common ancestor, Prophet Abraham (peace be upon him), the Jews, Christians and Muslims share a special relationship and practice religions that exhibit remarkable moral and theological resemblance. But most of people know little about each other. There is a need for more understanding to reduce misconception and hatred so essential for world peace. Trialogue is a welcome effort in this context. The co-author of book “Trialogue” Leonard Swidler is one of the American originators of the term "Trialogue" The word "Trialogue" derives from the popular use of the term "dialogue," which comes from the two Greek words dia (across) and logos (word), and literally means "words across." Just as di-a-logos means "words between two persons," tri-a-logos means "words among three persons. In the book “Trialogue: Jews, Christians, and Muslims in Dialogue, by Leonard Swidler, Reuven Firestone, Kalid Duran raises this term to a new level.
Just a reminder:
“Say: O People of the Scripture (Jews & Christians)! Come to an agreement between us (Muslims) and you: that we shall worship none but God, and that we shall ascribe no partner unto Him, and that none of us shall take others for lords beside God. And if they turn away, then say: Bear witness that we are they who have surrendered (unto Him)”(Quran;3:64)

“Abraham was neither a “Jew” nor a “Christian”, but was one who turned away from all that is false, having surrendered himself unto God; and he was not of those who ascribe divinity to aught beside Him.”(Qur’an;3:67)
“Abraham believed God, and it was reckoned to him as righteousness (Genesis 15:6)
“So you see that it is men of faith who are the sons of Abraham.”(Galatians;3:6-7)
“If you are Abraham’s children, do the deeds of Abraham.”(Jesus Christ,  John; 8:39)
Leonard J. Swidler is Professor of Catholic Thought and Interreligious Dialogue at Temple University, Philadelphia, Pennsylvania, where he has taught since 1966. He is the co-founder and editor of the Journal of Ecumenical Studies (quarterly). He is also the founder/president of the Dialogue Institute — Interreligious, Intercultural, International (founded 1978), and the founder/president of the Association for the Rights of Catholics in the Church.
Rabbi Firestone is professor of medieval Judaism and Islam at Hebrew Union College and founder and co-director of the Center for Muslim-Jewish Engagement. He has lived in Israel and Egypt and has travelled and lectured extensively in Europe, Asia and the Middle East. Firestone authored more than eighty scholarly articles and essays and seven books. Considered an entertaining lecturer and even humorous on occasion, he is known for his particular expertise in Jewish-Muslim relations.
Khalid Durán (4 April 1939-17 April 2010) was  an accomplished scholar and original thinker. He was a specialist in the history, sociology and politics of the Islamic world. Born of a Spanish mother and a Moroccan father, he spoke five languages and was educated in Spain, Germany, Bosnia, and Pakistan. A German citizen, he has lived in the United States since 1986, teaching and writing mostly about Islam at leading universities and think tanks. In the 1970s, he worked at Pakistan's Islamic Research Institute and travelled extensively in the Middle East and South Asia. He was a visiting professor at universities in Pakistan, Austria, Germany, Scandinavia, and the United States, teaching at departments of anthropology, history, religion, and sociology. He is the author of five books and numerous articles on Islam, the Middle East, North Africa, and Central and South Asia, covering both history and current affairs. He wrote book: “An Introduction to Islam for Jews”, fourteen scholars of Islam approved the manuscript prior to publication; in addition, it won glowing reviews from such authoritative figures as Cardinal William Keeler of Baltimore, the eminent church historian Martin Marty, and Prince Hassan of Jordan.
These three professors, beginning with Firestone and Judaism, present their faith traditions and the challenges as well as possibilities for genuine Trialogue. Each offers invaluable insights into the ways they share Hebraic roots and Abrahamic traditions and how their beliefs and practices have evolved through the centuries up to and including the present. Throughout the text, readers are encouraged to pause for reflection and or discussion of the key points presented by the authors. This is a fascinating, enlightening, and highly recommended introduction to these three great faith traditions and how they evolved and are practiced today. , and as such, is a strong basis for understanding of the core beliefs and values of major part of worlds populations. To understand the similarities, and the differences, establishes a basis for tolerance, communication and understanding between peoples and nations. This book is a good step in that direction and in promoting that ideal. Here are excerpts from authorised google book store :-

To conclude with the words from Dr.Riffat Hassan:  Muslims, Christians and Jews are people of faith whose traditions, Abrahamic in origin, affirm God the creator, who makes moral demands and offers hope to all people and all nations. We share a common belief that although religion has played a role in the conflicts which plague the world today, in the Middle East and elsewhere, religion has the potential for being a large part of the solution. Hence we share a common hope that the potential for peace lies within the three traditions represented by Jews, Muslims and Christians.
Children of Abraham are profoundly troubled by the deterioration of the state of the world. While it is easy enough to see that religion has contributed towards creating or aggravating a number of current problems, it is not easy to see its healing and reconciling power in a world which is more and more divided by hatred and hostility blasphemously proclaimed in the name of God. One is greatly pained by the fact that religious ideas and sentiments are being manipulated to distort and sometimes even destroy the fundamental truth of   religious traditions of Abrahamic faiths.
It is to be recognised that in many cases the issues involved in the conflicts between the three Abrahamic communities or peoples are by no means simple, but it should be understood how each community may come to perceive its own stance as being morally and religiously justified. Nonetheless, all must continue to believe that God, who created all human beings, extends his care and compassion to all who believe in Him and strive earnestly to act in accordance with his revealed will, and that it cannot be pleasing to God that those who profess to love him do not love each other. God’s command is clear and the issue before us is obedience.
Despite all the tensions and dissensions, one should affirm each other as Jews, Christians and Muslims and therefore not loose sight of the peace imperative which is deeply embedded in the Jewish–Christian–Islamic traditions. The commitment to peace entails commitment to justice, and that without justice there can be no real or lasting peace. Peace and justice are mutually reinforcing and cannot be opposed to each other.
The Jews, Christians and Muslims believe that God is the source for all their  life and that they must seek to emulate his attributes. Not only  that God is Just but that his Mercy is overflowing. If all can remember how greatly—both as individuals and as communities— all are in need of the compassion of God, perhaps it would help us to find within ourselves and our traditions the resources for transcending that history of conflicts which makes it so difficult for us to enter into a co-operative and loving relationship with each other and hence with our Creator, for which a Trialogue at all levels is imperative.
-------------------------------------------------------
Book review , excerpts from :
Trialogue: Jews, Christians, and Muslims in Dialogue
Book by Leonard Swidler, Reuven Firestone, Kalid Duran, ISBN-13: 9781585955879, Publisher: Twenty-Third Publications/Bayard, 2007,Pages: 224
More: