Rumana Hussain recently had a chance to spend the month of Ramazan, and also Eid, in Shanghai. Although not very noticeable, there are approximately 60,000 Muslims living in Shanghai, a city of over twenty million. There was a speedy increase in the Muslim population of this city after the Opium War in 1840, after which Shanghai was forced to open up for foreign trade. Islam was first introduced in China in its earliest days through Arab and Central Asian traders. The Chinese Emperor at the time, Yong Hui, who otherwise had no interest in adopting foreign ideas and beliefs, out of respect for the first Muslim mission to China, ordered the building of a mosque in Canton City (Guangzhou). The Memorial Mosque, first built in the seventh century, was entirely rebuilt in 1350 AD, and rebuilt again in 1695 under Emperor Kangzi of the Qing dynasty, after being destroyed in a fire. It is also known as the Great Mosque of Guangzhou. The mosque complex covers an area of about 3,000 square meters and stretches along the north-south axis, in the Chinese fashion. Like its contemporaries at Quanzhou, Hangzhou and Yangzhou, the Great Mosque of Guangzhou is notable for its integration of the local Han building tradition with imported Arab styles 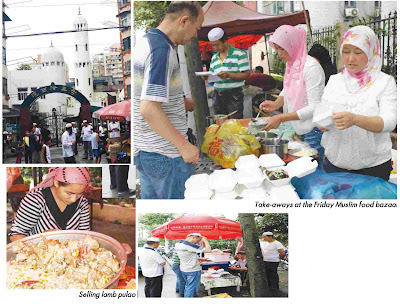 From official estimates of about 200 million religious believers in the country today, 11per cent are said to be Muslims. Within this, the largest community is the 9.8 million Hui Muslims, followed by 8.4 million Uyghurs living in the West of the country. Other Muslim groups include the Dongxiang, Kazakh, Kirghiz, Tatar, Tajik, Uzbek, Salar and Bao’an. The majority of Chinese Muslims are descendents of Iranian, Turkish or Arabian parents who married in China and adopted many Han Chinese customs.

There are about a dozen mosques in Shanghai. The oldest mosque is the Songjiang Mosque, built during the Yuan dynasty (1341-1868). Every Friday, about 35 to 40 stalls are lined up on both sides of the street near the Huxi Mosque. This is perhaps the biggest Muslim food bazaar in the city offering halal foods, and is visited by Muslims and non-Muslims alike. You will see woks of rice, lamb cooked in a variety of ways (lamb kababs, lamb on skewers, lamb broth…), naan in different tastes, shapes and sizes, pulao, beef dumplings, noodles, grilled mutton chops, shashlik and chicken, spices, fresh and dry fruit, also mehndi and kajal from Pakistan!

There are several Uyghur Muslim restaurants in the city serving Xinjiang food. They range from small places with no special ambience to large, crowded restaurants where the dishes served, the music played, and the wall murals are all characteristic of Central Asia. A restaurant called Xibo, serving Xinjiang food, is perhaps the only one of its kind in Shanghai which has a chic and contemporary interior. Muslim eating places in the city remain open all day during Ramazan. An ‘Assalamo Alaikum’ to the owner or Muslim bearers will ensure a big friendly smile and good service.

Beards are not exclusive to the Muslims in China. Very few Chinese men grow beards and/or moustaches. This is perhaps a result of growing western influence as, according to ancient Confucian custom, the Chinese were not supposed to cut their hair or shave their beard in conformity with filial piety. However, many Chinese Muslim men cover their heads with caps, and women with scarves. In most other ways, however, the Chinese Muslims are quite ‘Sinicised’ and have integrated with the Han majority.

Dawood C. M. Ting wrote in ‘Islamic Culture in China’ regarding the adoption of Chinese surnames by Chinese Muslims: “Many Muslims whose names started with the letter M took the surname Ma, partly because Muslims loved horses and the character Ma stands for horses. There is a common saying, ‘Nine Ma in ten Muslims.’ The Chinese surnames Mo, Mai, and Mu have been adopted by Muslims whose names were Mohammad, Mustafa, Murad, Masood. Many Muslims who found no existing common Chinese surname sounding like their names simply used the Chinese character sounding closest to their name, for example, Ta for Dawood and Tahir; Ha for Hasan; Ho for Husain; Ting for Jalaluddin or Shamsuddin…” When in China, do as the Chinese do!
http://www.dawn.com/2011/09/25/shanghai-muslims-skewers-and-surnames.html