An image makeover for Narendra Modi, The Muslim Killer

Mr Modi is a polarising figure, Is India's most controversial and divisive politician emerging as a prime ministerial candidate? Supporters of Narendra Modi, chief minister of Gujarat, believe so. For evidence, they point to his much-hyped three-day, tax-payer-funded hunger strike in an air-conditioned hall for social and religious harmony over the weekend, which ends on Monday. The fast, they believe, enabled him to reach out to the Muslim minority, who bore the brunt of widespread religious riots in the state - following the torching of a passenger train carrying Hindu pilgrims in 2002. 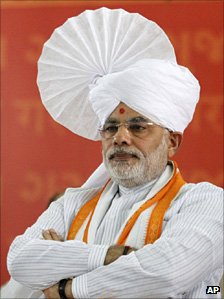 Mr Modi is getting other backers as well. The latest US Congressional Research Service report on India says he is one the likeliest candidates for prime ministership in his Hindu nationalist Bharatiya Janata Party (BJP). (The US, by the way denied Mr Modi a visa under a law barring entry for foreign government officials found to be complicit in severe violations of religious freedom.)

No politician in India draws such extreme reactions as Mr Modi does.

His supporters have much to crow about. Under Mr Modi's stewardship, Gujarat has been enjoying double-digit growth in recent years. Helped by good connectivity, regular electricity, efficient ports and a laissez faire bureaucracy, its humming factories churn out 16% of India's industrial production, and 22% of its exports. Even farm growth is touching double digits. Mr Modi is a man of grandiose ambitions - he plans to set up India's biggest solar energy park and build the world's tallest statue and make Gujarat a hub of international finance. Suitably impressed, The Economist magazine recently called Gujarat 'India's Guangdong', going on to declare that its manufacturing-driven, jobs-intensive economy could be a "vision of India's future".

'Partisan'
Mr Modi's critics insist that he did not do enough to bring the riots under control in 2002. More than 1,000 people, mostly Muslims, were killed in the violence, which remains a blot on the chief minister's record. His opponents say he indirectly egged on Hindu mobs who were believed to have led most of the attacks. He denies this. In April, a senior police officer in a sworn statement to the Supreme Court alleged that Mr Modi deliberately allowed the rioting. There have been reports that official records relating to the riots were destroyed "in line with regulations". In 2008, responding to allegations that Mr Modi's government was doing little to bring those responsible to justice, the Supreme Court set up a panel to investigate the riots. Opponents point out that Mr Modi has never apologised for the riots.

But, as commentator Swapan Dasgupta writes, "the more he is vilified and painted as the blood-sucking inheritors of Dracula's mantle, the more he seems to grow from strength to strength". Mr Modi's majoritarian politics and efficient administration, many say, has definitely helped him win two elections on the trot, and he looks a clear favourite to win next year's state polls as well. A win would make him Gujarat's longest running chief minister, with 12 uninterrupted years in power.

But will that be enough to catapult Mr Modi to the national stage, and make him a promising prime ministerial candidate for BJP? Especially when his party is struggling to throw up a credible, nationally accepted leader?

The 60-year-old Mr Modi is still not kosher for most political parties. He still does not appeal to the moderates and Muslims. The emerging Indian middle class may love him for his no-nonsense efficiency, but their votes alone can never win him an election.

In trying to rebrand himself as a formidable national leader and trying to get an image makeover, Mr Modi, many analysts believe, is walking a tightrope. An adverse judicial judgement on his government's role during the riots could irreparably damage his national political ambitions.

Many believe, Mr Modi has shown good political timing in projecting himself at a time when his party needs a national leader. But he has also betrayed a limited political imagination, they say, by going on a copycat hunger strike during a time when India may be already tiring of fasts as an instrument of coercion and political statement.