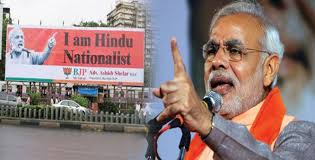 The debate around Hindu Nationalism and Indian Nationalism is not a new one. During colonial period, when the rising freedom movement was articulating the concept and values of Indian nationalism, the section of Hindus, keeping aloof from freedom movement asserted the concept of Hindu Nationalism. The debate has resurfaced again due to the one who is trying to project himself as the Prime-Ministerial candidate of BJP-NDA, Narendra Modi. In an interview recently (July 2013) said very ‘simply’ that he was born a Hindu, he is a nationalist, so he is a Hindu Nationalist! His Party President Rajnath Singh also buttressed the point and took it further to say that Muslims are Muslim nationalists, Christians are Christian Nationalists. So one has a variety of nationalisms to choose from!

Modi’s putting 2+2 together and claiming to be a Nationalist and a Hindu and so a Hindu nationalist is like putting the wool in others eyes. Hindu nationalism is a politics and a category with a specific meaning and agenda. This is the part of the ideology and practice of Modi’s parent organizations, BJP-RSS. During colonial period the rising classes of industrialists, businessmen, workers and educated classes came together and formed different organizations, Madras Mahajan Sabha, Pune Sarvajanik Sabha, Bombay Association etc.. These organizations felt for the need for an over arching political organization so went in to form Indian National Congress in 1885. The declining sections of society, Muslim and Hindu landlords and kings also decided to came together to oppose the all inclusive politics of Congress, which in due course became the major vehicle of the values of freedom movement. These declining sections were feeling threatened due to the social changes. To hide their social decline they projected as if their religion is in danger. They also did not like the standing up to the colonial masters by Congress, which had started putting forward the demands for different rising social groups and thereby for India. Congress saw this country as ‘India is a Nation in the making’.

As per declining sections of landlords and kings; standing up to, not bowing in front of the ruler is against the teachings of ‘our’ religion so what is needed according to them is to promote the loyalty to the British. They, Hindu and Muslim feudal elements, came together and formed United India Patriotic Association in 1888. The lead was taken by Nawab of Dhaka and Raja of Kashi. Later due to British machinations the Muslim elite from this association separated and formed Muslim league in 1906, while in parallel to this the Hindu elite first formed Punjab Hindu Sabha in 1909 and then Hindu Mahasabha in 1915. These communal formations argued for Muslim Nationalism and Hindu nationalism. Hindu nationalists also developed the political ideology of Hindutva, articulated particularly by Savarkar in 1923 in his book ‘Hindutva or Who is a Hindu?’ This was an enviable situation for British as such groups would weaken the rising national movement. On one side they quietly supported the Muslim League and parallel to this they handled Hindu Mahasabha with velvet gloves.

Taking a cue from the ideology of Hindutva, RSS came up in 1925, with the path of Hindu Nationalism and goal of Hindu Nation. The values of rising classes embodied in the persona of Bhagat Singh, Ambedkar, Gandhi, Maulana Abul Kalam Azad and many others mainly revolved around Indian Nationalism, built around the principles of Liberty, Equality and Fraternity. The ideology of Muslim League selectively drew from some Muslim traditions to assert the caste and gender hierarchy of feudal society. While Hindu Mahasabha and RSS had tomes like Manusmriti to talk about similar graded hierarchies of caste and gender. Muslim and Hindu communalists were not part of freedom movement as freedom movement was all inclusive and aimed at secular democratic values. Muslim and Hindu communalists drew from glories of respective Kings of the past and kept aloof from anti British struggle, some exceptions are always there to show the evidence of their participation in the freedom struggle.

Gandhi’s attempt to draw the masses in to anti British struggle was the major point due to which the Constitutionalists like Jinnah; traditionalists of Muslim League and Hindu Mahasabha further drifted away and consolidated themselves after 1920s. The trajectory of Hindu Nationalism from the decade of 1920 becomes very clear, to be on the side of British to oppose the Muslim Nationalists. Same applies to Muslim League, as it regarded Congress as a Hindu party. The Freedom of the country and tragic partition led to Muslim Leaguers going to Pakistan while leaving sufficient backlog to sustain Muslim communalism here. Hindu Nationalists in the form of Hindu Mahasabha and RSS gradually started asserting themselves, beginning with murder of Mahatma Gandhi, who surely was amongst the best of the Hindus of that century and probably of many a centuries put together. Hindu Nationalists formed first Jan Sangh and later present BJP. The major issue taken up by these nationalists was opposition to cooperative farming, public sector and undertook a program called ‘Indianization of Muslims’.

The identity related issues have been the staple diet for religious nationalist tendencies. ‘Cow as our mother’, Ram Temple Ram Setu, Abolition of article 370 and Uniform civil code has been the foundation around which emotive hysterical movements have been built. While they keep bringing to our notice as to under whose rule more riots have taken place, one forgets that the root of communal violence lies in ‘Hate other’ ideology spread by communal streams. And most of the communal violence led to coming to power of communal party. Its major offshoot is polarization of communities along religious lines. Modi’s claim the democracy leads to polarization is misplaced wrong as in democratic politics the polarization is along social issues, like Republican-Democrat in America. Polarization around social policies-political issues is part of the process of democracy. The polarization brought about by the politics of Hindu nationalism or Muslim nationalism is around identity of religions. This is not comparable to the processes in US or UK. The polarization along religious lines is against the spirit of democracy, against Indian Constitutions’. Major pillar of democracy is Fraternity, cutting across identities of religion caste and region.

Modi himself, a dedicated RSS swayamsevak has been steeped in the ideology of Hindu nationalism. He glosses over the fact that the large masses of Indian people, Hindus never called and do not call themselves Hindu nationalists. Gandhi was not a Hindu nationalist despite being a Hindu in the moral and social sense. Maulana Abul Kalam Azad was not a Muslim nationalist, despite being a devout Muslim, being a Muslim scholar of highest caliber. During freedom movement also most of the people of all religions’ identified with Indian Nationalism and not with religious nationalism as being projected by Modi and company. Even today people of different religions identify with Indian nationalism and not with religious Nationalism on the lines of Modi and his ilk.

This is the dark tunnel of History, where such invocations of religion in the arena of politics take a semi respectful place, as being witnessed in many parts of the World and more so over in India. One hopes the distinction between religious nationalism and Indian nationalism will not be lost focus of!

By Ram Puniyani: He was a professor in biomedical engineering at the Indian Institute of Technology Bombay, and took voluntary retirement in December 2004 to work full time for communal harmony in India. He is involved with human rights activities from last two decades.He is associated with various secular and democratic initiatives like All India Secular Forum, Center for Study of Society and Secularism and ANHAD.
http://www.countercurrents.org/puniyani240713.htm
Related: