The invasion of Afghanistan 15 years ago was an arrogant, wretched adventure that caused a migrant crisis by Robert Fisk 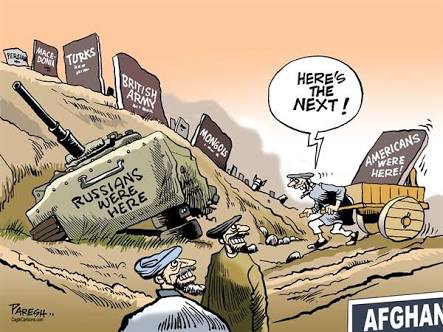 A young man sits among the wreckage after a suicide bomb attack in Kabul in July EPA
As usual, all the warnings were there. Three Anglo-Afghan wars. Russia’s Vietnam. The Graveyard of Empires. Poppy capital of the world. The most bombed, crushed, corrupted, mined nation on the globe.

So off we set in our righteous war of revenge for the Twin Towers and the dead of 9/11 to bomb Afghanistan all over again and – a new twist, this – to bring “democracy” to the land though which Alexander the Great passed en route to India. Osama bin Laden was our latest Hitler, although his protective screen of Salafist obscurantist Taliban legions could hardly be compared to the Wehrmacht.

The story, of course, was flawed from the start.

With what arrogance we began the whole wretched adventure 15 years ago. This time, we would not forget the brave Afghans (as we did after they drove the Russkies out of their country) and there would be freedom, aid, security and democracy. But as the years went by, the newly installed and “democratically elected” Afghan government became as wretched and corrupt as its communist predecessors.

 
Afghanistan army battles to push Taliban from Tarinkot
The NGOs arrived with millions to spend – all competing with each other and with the US military which offered even more millions in humanitarian aid in return for intelligence information. There were the usual massacres, an atrocity or two – Afghans loyal to General Abdul-Rashid Dostum suffocated Afghan Taliban prisoners in container trucks, US jets and armed Americans liquidating prison mutineers at only occasional cost to themselves – but Kabul was swiftly “liberated” by journalists and a clutch of tribesmen from the Panjhir Valley.

A few women were persuaded to take off the evil burqa, in which their ancestors in parts of the country had covered themselves for hundreds of years, and George W Bush and our beloved Tony Blair quickly diverted themselves to the more lucrative rewards of a not dissimilar war in Iraq.

Allegedly, we “took our eye off the ball” by abandoning Afghanistan for Mesopotamia, but contemporary documents clearly prove that Iraq was Bush’s target all along. Afghanistan was never intended to be anything but a side-show.

By the time President Hamid Karzai had been installed in Kabul with the approval of a heavily tribal loyal “jurga” – the kind of assembly which, if British, might have prevented Brexit – everyone was being bought; the security services, banks, big business, the presidency itself.

By the time Karzai – whose green gowns were, at least, immaculate – was elected for a second time, even the UN declared the election a fraud. The US President duly congratulated Karzai on his election win. This was when American advisers began to tell us that we could not expect “Jeffersonian democracy” – whatever that was – in Afghanistan.

This would, after all, be a more rough-and-ready kind of political freedom, in which people voted along tribal lines. Karzai himself only began to fade from American approval, though, when he condemned US air strikes on innocent Afghans – speaking in Pushtu, which few US officials understood. When he appeared to pass a law allowing minority Shiite men to rape their wives, the White House published a photo of an apparently humbled Karzai under the stern and disapproving gaze of a matronly Hillary Clinton. US voters, please note. The US media then seized on Karzai’s unsavoury brother who was governor of Kandahar, the drugs capital of western Afghanistan.

It was the same old problem. To save American lives, the US bought up the Afghan militias to fight for them. These were the same outrageous gunmen and rapists who had destroyed Kabul in a four-year civil war in the early 1990s, but now they had to fight a resurgent, purist Taliban – who had done quite a lot of raping and marrying of child brides – to maintain US power.

Most repulsive of this bunch of misogynists was Gulbudin Hekmatyar, a former CIA asset militia leader – despised and feared by pretty much all Afghans – who ended up as an ally of the Taliban and is currently fighting his former American masters. In other words, he’s now back in the “Hitler” camp.

Far more sinister were the trails of militia leaders who wound their way across this devastated land in convoys of brand new 4x4s, sustained by Western cash and a reflourishing drugs market, supposedly still fighting the Taliban – with whom some of them were commercially connected – while in fact staking out little kingdoms in a land which had grown used to such fiefdoms over thousands of years.

Which is why Afghanistan will not become Islamistan or even Talibanistan. It will, when the West finally packs up and leaves, become Mafiastan. Perhaps it already is.

Later years – or “current events” as we used to call them at school – dragged history along behind them. Just as the Americans and British (and even the UN, in its unwiser moments) thought they could build a nation in Afghanistan, so they tried the same old trick in Iraq, with even more tragic consequences. The Iraqi opposition – more nationalist than tribal, but soon to be even more Islamist than the Taliban – were quicker off the mark than their brothers in Afghanistan. They knew about insurrection, and the American and British soon faced a full-scale resistance war in Iraq as well as Afghanistan.

If historical lessons transferred from Kabul to Baghdad, tactics moved back in the other direction: the suicide bomber, hitherto an angel of death only in Lebanon, “Palestine” and Iraq, suddenly appeared in the towns and cities of Afghanistan, a phenomenon hitherto unheard of in the deserts and mountains below the Hindu Kush. And then in Pakistan. And here was another victim of our adventure in Afghanistan – which we today, I notice, call an “intervention”, the very same word the Russians used when they first invaded the same country in 1979.

And now, today, the Afghan refugees have fled yet again, via Turkey, into Europe. Afghans flock the streets of Istanbul. There is more Dari spoken in some parts of the city than Turkish. Yet now, we propose to deport 196,000 Afghan refugees from Europe back to the hell-hole we helped to create in Afghanistan. Quite a legacy from Kabul in 2001.

Now Isis is in Afghanistan. Car bombs are as frequent in Kabul as they are in Baghdad, suicide killers as numberless as they are anonymous.

A new President, Ashraf Ghani, an American citizen, has pledged an end to corruption – some hope – but the militias reign supreme. (Ghani’s running mate was the ghastly Dustom). His Afghan army and police are as impotent as they were when first created by yet more American advisers after 2001.

Soldiers turn up for their uniforms and a month’s pay then vanish into the desert. Khunduz is under Taliban siege for the fourth time. The Americans bombed an MSF hospital in the last battle for the city. And the Germans have just announced that they won’t pay more than the original $5,000 (£4,000) to families who lost their loved ones in a German/Nato air strike because the pilot followed the rules.

Again, the same old story: it’s not the extent of an Afghan’s loss that will measure his recompense but the degree of culpability of those who brought about that loss. And we are never – ever – going to blame ourselves.

Oh yes, and that chap Bin Laden. Wasn’t he the guy who took us to Afghanistan after 9/11? Well, he bottled himself up in Pakistan right next to a military academy and was eventually assassinated by a US hit squad. His remains were returned to an American base in Afghanistan before being dumped into the Indian Ocean – or not, according to US investigative journalist Seymour Hersh.

Hillary and Obama watched the killing live on video link. What a drama. But, long before, Bin Laden’s own al-Qaeda movement had morphed into Iraq and then into Syria and is now, after at least two name transfusions, the best known is al-Nusrah, fighting the Assad regime in Syria, especially in the rubble of eastern Aleppo, where we rightly weep for the civilians but respectfully call al-Nusrah the ‘rebels’.

And not a soul today suggests that the folly of our assault on Afghanistan has a narrative which leads all the way to the tragedy of Syria – and to Russia’s latest involvement in the Middle East. The Graveyard of Empires, indeed.

 The invasion of Afghanistan 15 years ago was an arrogant, wretched adventure that caused a migrant crisis
by Robert Fisk, independent
http://www.independent.co.uk/voices/afghanistan-invasion-war-taliban-911-migrant-crisis-british-troops-arrogant-wretched-adventure-a7350181.html