What Exactly Is The 'Islamic' World? 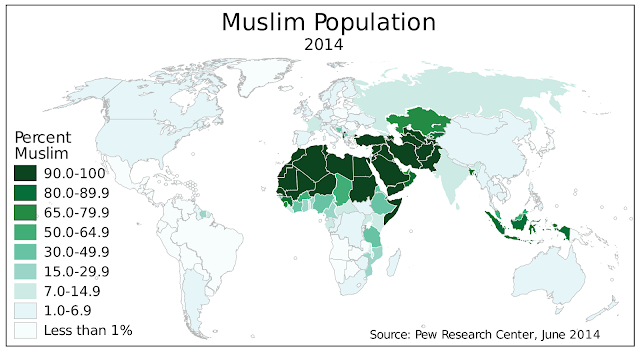 The term Islamic refers to Islam as a religion. The term Islamicate refers to the social and cultural complex that is historically associated with Islam and the Muslims, even when found among non-Muslims. Islamic world | Britannica.com
The terms Muslim world and Islamic world commonly refer to the Islamic community (Ummah), comprising all those who adhere to the religion of Islam,[1] or to societies where Islam is practiced.[2][3] In a modern geopolitical sense, these terms refer to countries where Islam is widespread, although there are no agreed criteria for inclusion. https://en.m.wikipedia.org/wiki/Muslim_world
While originally a religion and way of life, given the way the term “Islamic” is being tossed around like candy today, one could be forgiven for mistaking Islam for a country. According to particular groups both in the West as well as within the regions in which Islam has a marked presence, such as the Middle East, the people of the “Islamic” world speak the Islamic language, eat Islamic food, make Islamic films, write Islamic literature and produce Islamic art and architecture. In short, they are defined solely by a religion (which may or may not be theirs), their individual cultures and identities amounting to mere afterthoughts. Would it be easier to acknowledge the vast diversity—on every level—of the so-called “Islamic world” and the many peoples that comprise it, rather than use the term “Islamic” in every possible instance? Of course, after all, we don’t exactly use “Christendom” to define Europe and North America. But to ditch the term “Islamic” simply wouldn’t be convenient for certain groups, nor would it serve their interests.

Perhaps nowhere has the term “Islamic” been more abused and misapplied than in the realm of art, both contemporary and historical. Walking through museums in North America and Europe, I’m often left scratching my head when I see, for instance, pre-Islamic artifacts from Sassanian Iran in the “Islam” section, as well as secular works celebrating Iran’s pre-Islamic past, such as folios from the Book of Kings epic. In more contemporary settings, I can’t help but ask myself when looking at pop art from Lebanon where on earth the connection to Islam is. Not surprisingly, more often than not, there isn’t any. When a contributor to my publication asked a curator from the Los Angeles County Museum of Art in 2015 what she meant by the term “Islamic art” (the show on display was titled “Islamic Art Now”), she candidly replied that “It here has nothing to do with religion, or religious art, per se.” Well, I’ll be damned.

To avoid condemning the dastardly West à la Edward Said, I should say that those within the Middle East and elsewhere have also been adding to the conundrum. Take, for example, a glitzy museum in a tiny Persian Gulf nation (I won’t name names) with a massive lack of local art and artifacts. If it simply limits itself to objects pertaining to its own country, it would be hard pressed to fill its museum, or even provide a basis for its existence. If it uses the term “Islamic,” though, it can easily fill its sparkling halls with goodies from Iran, Syria, India, Spain and elsewhere. “Behold the glories of the Islamic world,” they can tell their visitors. Problem solved.

Regardless of the culprits, the way in which the term “Islamic” is being misused and thrown about is incredibly frustrating and problematic, as not only does it perpetuate the idea of a monolithic Islamic “other,” but also strips the diverse peoples of the Middle East and elsewhere of their individual cultures, heritages, languages, religions (yes, many others are practiced in the “Islamic” world, too), modes of expression and ways of life; in short, it robs them of their identities, packaging them solely as “Muslims.” In certain cases, such as calligraphy in editions of the Koran, it would be perfectly acceptable and appropriate to use a term such as “Islamic;” but even then, there are Persian, Turkish and Arabic schools of calligraphy, which need to be duly acknowledged. Even mosques, the images of which are perhaps first conjured when the word “Islam” is uttered in the West, present a problem. Many Iranian mosques have been built upon Zoroastrian fire temples, for example, and contain elements that are indigenously Iranian. Can an Iranian mosque, then, be spoken of in the same context of one in Timbuktu simply because of a connection to a religion—and one practiced so differently in both places, at that? To quote Robert Byron in his classic 1937 travelogue, “The Road to Oxiana”—

… The Kala-i-Dukhtar at Firuzabad provides another Sassanian prototype for Persia’s next most important contribution to Mohammedan architecture after the dome on squinches: the ivan or open-fronted hall. This form, more than any other, changed the character of the early mosques … Its vagaries have changed the face of every town in Islam, and it was pleasing, I thought, to find myself hanging on to an old nut-tree and eating an orange in the place where the idea began.”

If we in the West don’t refer to Andy Warhol as a “shining example of Christian art,” or speak of Mark Rothko’s paintings as representing Jewish modernism—that is to say, if we don’t define them by the religious traditions into which they were born—then why do we do so when it comes to Iranian, Arab and Turkish artists for example? Why does everything—art, architecture, music, cuisine, you name it—fall under the label of “Islamic” when it comes to regions such as the Middle East? To take things even further, the auction house Christie’s now refers to “Middle Eastern” art as Iranian, Arab and Turkish in its sales in Dubai. Perhaps they have realized something so basic that others have yet to.

In short, the term “Islamic,” particularly in the context of arts and culture, has been abused, exploited and misapplied by many. While in some instances it may be appropriate, in most of the ones I’ve seen, it’s inaccurate, misrepresentative, plain wrong and even ridiculous (Islamic cuisine? Really?). With the term being blindly accepted and bandied about by many, and with major exhibitions like the de Young Museum’s “Fashion of Islam” (because the people in question dress Islamic, too) in the pipeline, it’s high time we all questioned the use and applicability of the term “Islamic” and re-examined its flagrant abuse by those in both the West and the “Islamic” world. Indeed, the time has come to stop defining a vast chunk of earth by a single word, and rather acknowledge the contributions of its myriad peoples and their respective cultures.
What Exactly Is The 'Islamic' World?  by Capital Flows, forbes.com