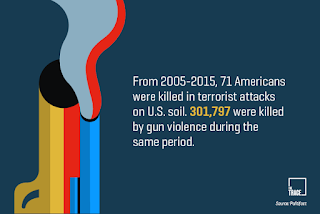 According to figures from the US Department of Justice and the Council on Foreign Affairs, 11,385 people died on average annually in firearm incidents in the US between 2001 and 2011.
In the same period, an average of 517 people were killed annually in terror-related incidents. Removing 2001, when 9/11 occurred, from the calculation produces an annual average of just 31.

Some 13,286 people were killed in the US by firearms in 2015, according to the Gun Violence Archive, and 26,819 people were injured [those figures exclude suicide]. Those figures are likely to rise by several hundred, once incidents in the final week of the year are counted.
The US spends more than a trillion dollars per year defending itself against terrorism, which kills a tiny fraction of the number of people killed by ordinary gun crime.
http://www.bbc.com/news/world-us-canada-34996604

Using numbers from the Centers for Disease Control and Prevention, we found that from 2001 to 2013, 406,496 people died by firearms on U.S. soil. (2013 is the most recent year CDC data for deaths by firearms is available.) This data covered all manners of death, including homicide, accident and suicide.
According to the U.S. State Department, the number of U.S. citizens killed overseas as a result of incidents of terrorism from 2001 to 2013 was 350.
In addition, we compiled all terrorism incidents inside the U.S. and found that between 2001 and 2013, there were 3,030 people killed in domestic acts of terrorism.* This brings the total to 3,380.
http://edition.cnn.com/2015/10/02/us/oregon-shooting-terrorism-gun-violence/