View from US: Pulpits and lies 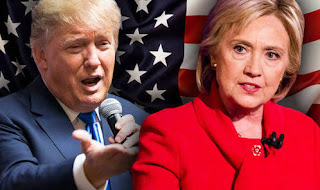  Hillary Clinton and Donald Trump will take the stage at the first general election presidential debate this year
The world watches while America loses its moral compass. It stands at a crossroads — one that leads in one direction to an unknown place (Donald Trump) and in the other to the same old place (Hillary Clinton). Both candidates are rated negatively at historic levels. The greatest casualty is truth, character and transparency. In the first presidential debate on September 26, both will likely resort to falsehood and braggadocio instead of focusing on substantive issues of terrorism, foreign policy, national security, healthcare, economy and employment.

The bigger bully in the room will win.

For 18 months we’ve watched Trump and Clinton slug it out. With just a few weeks left to the elections, Trump incites his voters towards ugly confrontations. Never before has America been so divided, so polarised, so disgusted. As the oldest candidates ever to run for president (Clinton would be the second oldest president in history, Trump would be the oldest), both hide the real state of their health. Trump and his supporters insist Hillary is very sick physically, while Hillary and her camp assert Trump is sick mentally and therefore unfit to be the leader of the ‘free world.’

The lady in the pantsuit has put “half of Donald Trumps’s supporters” in a “basket of deplorables”, calling them “racist, sexist, homophobic, xenophobic, Islamaphobic, you name it”. Hillary Clinton is absolutely correct. Yes, it’s a fact: half (or more) of Trump’s supporters are rabid racists. He has spearheaded and activated dormant white supremacy groups gunning for people who don’t share their religion or look like them. On September 11, an arsonist set fire to the Islamic Center at a Florida mosque that the Pulse nightclub shooter, Omar Mateen, attended. The same day, in New York, a Muslim woman in hijab walking on Fifth Avenue was set on fire by a man with a lighter. More hate crimes are expected. The 70-year-old billionaire has successfully poisoned the well by targeting American -Muslims as his object of hate and loathing. If he is elected president, his supporters will have just one message: “You Muslims need to get back to your country.” And 69 per cent of these bigots are convinced that Obama is a Muslim born in Kenya.

The first presidential debate on Sept 26 between Clinton and Trump could be the most watched event on US television history but will it go beyond rhetoric?
On the flip side … Section 60, Grave 7986 is the most frequented site at Arlington cemetery in Washington this summer. With its Islamic crescent and Purple Heart inscription, it has attracted scores of visitors who leave behind messages of support and sympathy for parents of the slain Captain Humayun Khan. Pakistan-born Khizr and Ghazala Khan have received more than 4,000 and counting handwritten letters about their son. A woman whose father lies buried a few feet away from Humayun writes: “I’ve been thinking about the ways politics and bureaucracy has tainted my love for this country. But seeing your parents, learning about you — has shown and reminded me of the dignity, love and blessings stitched into the diverse fabric of the United States.”

It is a universal truth that almost all politicians around the world are inveterate liars. If you had to choose between the huckster and conman Donald Trump and Hillary Clinton’s secretiveness, whom would you choose? Or, if you had to choose between Nawaz Sharif’s gobbledygook on offshore accounts that his children hold and Asif Zardari’s alleged corruption earning him the title of ‘Mr 90 per cent’ whom would you choose? The problem with this sort of question is what you call a ‘binary choice’, meaning there are only two things to choose from.

What is the ideal yardstick for judging leaders? This is a tough one! Exercising our individual right to choose, we can often stumble. Our subjective judgement can be flawed, biased, slanted or warped. We can be small-minded, dogmatic or chauvinistic depending on who we judge. The worst specimens, according to many, are the pundits. David Brooks, who writes in the op-ed pages of the New York Times, is honest enough to admit: “I’m paid to be a narcissistic blowhard, to volley my opinions, to appear more confident about them than I really am, to appear smarter than I really am, to appear better and more authoritative than I really am.” He says he tries hard to keep away from a “life of smug superficiality”. Still, he can flounder at times, like most of his colleagues in the media.

Do opinion writers, columnists and television anchors really suffer from a delusional sense of infallibility, the same way politicians do both in America and in Pakistan? The answer is a resounding ‘Yes’. But here’s the big difference: while politicians win elections by lying to their electorates with tall promises, media persons merely succeed in preaching to the converted. The rest of the populace turns to social media for news, especially in an election season though social media is not immune to this problem either. The deranged Donald Trump is a master tweeter, pulling in millions of followers who swallow every word he tweets.

So who can check facts on both Trump and Clinton for their lack of accuracy? It’s the media, stupid, says the Los Angeles Times in its editorial. It blames the journalists for giving airtime to lies spewed out by Trump’s and Clinton’s surrogates without contradicting them. Some of these surrogates are paid by candidates to defend them on television, which in itself is a very dishonest practice by TV channels. It’s like an infomercial paid by the candidate to pitch for him and mislead viewers. According to the Los Angeles Times, there has been little sober public analysis of where the candidates stand and where their policy positions would bring the world. Instead the media, especially talk show hosts, have been “thrashing about over relative trivialities.”

Recently at a back-to-back ‘Commander-In-Chief Forum’ with Hillary Clinton and Donald Trump, the moderator Matt Lauer failed to dispute the latter’s outright lies. The New York Times censured Lauer for his lack of preparation in its editorial ‘A debate disaster waiting to happen.’ The moderator of the first presidential debate owes it to American people to challenge both candidates, especially their lies. If he fails, he’d have done the country a grave disservice.
View from US: Pulpits and lies
by Anjum Niaz, Dawn.Com