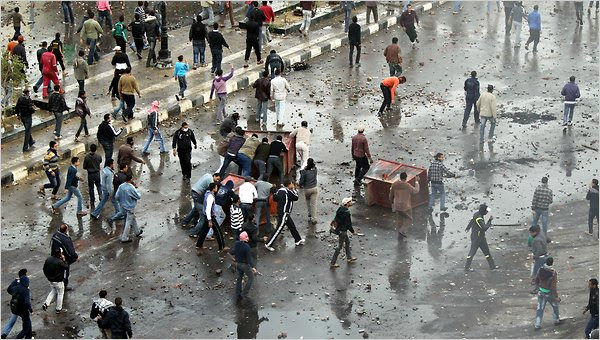 Khaled Desouki/Agence France-Presse — Getty Images
The most chaos to be found Thursday in Egypt was in Suez, above, but Alexandria has been a focal point for past protests.
That may be about to change.With organizers calling for demonstrations after Friday prayer, the political movement will literally be taken to the doorsteps of the nation’s mosques. And as the Egyptian government and security services brace for the expected wave of mass demonstrations, Islamic groups seem poised to emerge as wildcards in the growing political movement.
Reporters in Egypt said on Friday that, after rumors swept Cairo late Thursday that the authorities planned to throttle the protesters' communications among themselves, access to the Internet, text messaging services and Twitter was not possible on Friday morning in Cairo, Alexandria and possibly other cities.
Heightening the tension, the Muslim Brotherhood, the largest organized opposition group in the country, announced Thursday that it would take part in the protest. The support of the Brotherhood could well change the calculus on the streets, tipping the numbers in favor of the protesters and away from the police, lending new strength to the demonstrations and further imperiling President Hosni Mubarak’s reign of nearly three decades.
“Tomorrow is going to be the day of the intifada,” said a spokesman for the Muslim Brotherhood here in Egypt’s second largest city, who declined to give his name because he said he would be arrested if he did. The spokesman said that the group was encouraging members of its youth organization — roughly those 15 to 30 years old — to take part in protests.
But Islam is hardly homogeneous, and many religious leaders here said Thursday that they would not support the protests, for reasons including scriptural prohibitions on defying rulers and a belief that democratic change would not benefit them. “We Salafists are not going to participate in any of the demonstrations tomorrow,” said Sheik Yasir Burhami, a leading figure among the fundamentalist Salafists in Alexandria.
While the largest demonstrations have taken place in the capital, Cairo, and the most chaos Thursday was to be found in Suez, Alexandria has been a focal point for past protests. The beating death of a young businessman named Khaled Said last year led to weeks of demonstrations against police brutality and calls to overhaul the security services.
The city on the Mediterranean, long Egypt’s gateway to the outside world, has mirrored the country’s steady erosion over decades of authoritarian rule. It has gone from being a cosmopolitan showcase to a poor, struggling city that evokes barely a vestige of its former grandeur. The New Year’s bombing of a Coptic church here was a reminder of the direction of the city, identified by European intelligence services as a hub for radicalizing students who come to study Arabic. Many of the most radical Salafists — those who would support the use of violence — were arrested by the government after the bombing.
On the opposite end of the spectrum, Sheik Gaber Kassem, leader of the mystic Sufi community here, said the Sufis were discouraging their followers from taking part in the demonstrations, which the government has deemed illegal.
“We are going to be in the mosque and we’re going to be in front of the mosque, but we are not going to march in the streets,” said Mr. Kassem, adding that they were in favor of freedom of expression and had taken part in legal protests Tuesday, but that they were against the violence and chaos that were likely on Friday.
Relative calm prevailed here on Thursday, as activists said they were preparing for Friday’s demonstrations. With riot police and plainclothes security personnel watching, dozens of lawyers protested in front of the courthouse, calling for two of their colleagues who had been arrested at Tuesday’s demonstration to be set free and shouting, “People, people, take to the streets.”
Hamid Said, 29, who founded the Nasar Center for Human Rights in Alexandria, said that to date the protests here had not been led by Muslim groups, as the government claimed. “You did not have the Muslim Brotherhood protesting here, you had normal people protesting against their problems,” said Mr. Said, a lawyer who said he had been arrested five times since 2008, but never detained for more than a few days.
Mr. Said cited political oppression and police brutality as the leading causes of frustration among the people. He said that he had once applied for a position for which he was well qualified, but that he lost out to the son of a government minister.
Osama Moustafa Hassan Nasr, a Muslim cleric known as Abu Omar, said that many conservative Muslims would not support a secular politician like Mohamed ElBaradei, theNobel Prize winner and former head of the International Atomic Energy Agency. “ElBaradei and the others, they have no connection to religion. If Hosni Mubarak goes, they will replace him with someone else like him,” said Abu Omar, who came to prominence after it was disclosed that he had been kidnapped by the Central Intelligence Agency from Milan in 2003.
Religious leaders like Mr. Kassem said they could not rule out that many of their followers would join the protests.
The spokesman for the Muslim Brotherhood in Alexandria said that efforts by the government to hinder groups from gathering, like blocking access to social networking sites, would no longer be effective.
“It’s already clear that we will go out tomorrow. The message is already out,” he said. “Tomorrow all the Egyptians are going to be on the streets.
A version of this article appeared in print on January 28, 2011, on page A10 of the New York edition.
http://www.nytimes.com/2011/01/28/world/middleeast/28alexandria.html?_r=2&nl=todaysheadlines&emc=tha22
Mischief on Land Rejected:
اِنَّ اللّٰهَ لَا يُحِبُّ الۡمُفۡسِدِيۡنَ

“When it is said to them: “Do not make mischief on earth,” they say: “We make peace. Be aware! They are the ones who make mischief but they do not realize it.”(Al-Baqara;2:11-12 similarly also at 2:60, 206, 3:63, 7:56).
“The punishment of those who wage war against Allah and His Messenger, and strive with might and main for mischief through the land is: execution, or crucifixion, or the cutting off of hands and feet from opposite sides, or exile from the land: that is their disgrace In This world, and a heavy punishment is theirs In the Hereafter. Except for those who repent before they fall into your power: in that case know that Allah is Oft-Forgiving Most Merciful.”(Qur’an;5:33-34).
Exploitation of poor people, plundering the state resources, corruption, getting innocent citizens killed, not formulating policies whereby the citizens are protected, economically and physically to live in peace. Compromising sovereignty of State, acquired after great struggle and sacrifices in all terms, inducing loss of life of millions in partition .....


Please straighten up your priorities.
Resist oppression vigorously but peacefully..the right granted by the constitution...which rulers defy at will...


Wakeup! corrupt ruling mafia of Pakistan and other poor countries. Stop oppression through corruptions and misgovernment before its too late.....