The Thirteenth Tribe by Arthur Koestler

The Doctrine of ‘Promised land’ and the ‘Children of Israel’ needs an analysis in the light of historic round realities. Let us see who promised this land, and to whom? According to the Old Testament, God pledged much of what is now Palestine and Israel to the ‘children of Israel’. And the influential, pro-Israel Evangelical Christians in the United States believe that until the ancient land of Israel is restored to the Jews, the Second Coming, and therefore Armageddon, will not occur. According to this dogma, until these events take place, good Christians will not be raised to the Kingdom of Heaven. This doctrine go to the very foundation of the state of Israel, and the open-ended support it receives from the United States, they enter the realm of politics.
The ‘right of return’ is a founding principle of Israel. This implies that the Jews who have settled in the Zionist state are the descendants of the original twelve Israeli tribes of who went into exile and for centuries lived in the Diaspora. A further inference is that most of the Jews living in Israel and elsewhere are Semites descended from ancestors who came from the Middle East.
But what if most Jews today are not of Semitic stock at all? How would this affect their claim to be the ‘chosen people’ with a claim to the Promised Land? These are some of the questions raised by Arthur Koestler in his remarkable book “The Thirteenth Tribe”. Written in 1976, it has been out of print since 1982. [Koestler himself a Jew and at one time an active Zionist]. The author takes us to seventh century Caucasus where a mighty kingdom called Khazaria was coming into being. A century later, it stretched in a huge arc from the Black Sea to the Caspian. The Khazars, a Russo-Turkic people, were pagan nomads who worshipped many deities, and occasionally none at all. Ruled by the Kagan (or Khakan), they were fierce warriors who struck terror in the hearts of their neighbours. 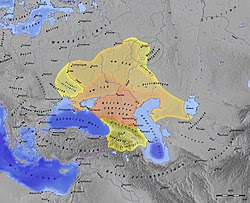 Soon after the advent of Islam, there were three major powers which dominated much of the known world: the Muslim Caliphate, Christian Byzantium, and the Khazar Empire. While the first two battled for supremacy, the Khazars acted as a buffer in the north. Indeed, Christendom has much to be grateful to the Kagan for, as his armies halted the advance of the Muslim forces that tried to encircle Constantinople by a pincer movement across the Caucasus. Between 642 and 652, the Arabs made a number of attempts to break through, but were repulsed with heavy losses each time.
After several decades of uneasy peace, the Muslims attacked again, only to be soundly defeated in 730 in the battle of Ardabil. Now it was the turn of the Khazars to go on the offensive, and they advanced as far as Mosul before they were halted. This warfare to the east provided the Eastern Roman Empire badly needed relief.

Around 740 AD, something remarkable happened in Khazaria: its ruler and his immediate family and court converted to Judaism. Historians have long speculated on the reasons for this seemingly bizarre decision. The consensus is that since the empire was located between the Muslim Caliphate and Christian Byzantium, the Kagan sought to shield his people and his kingdom from the ideological pull of either power centre by opting for an older and much respected faith. An additional factor in his calculus might have been the presence of many Jews in his kingdom who had fled persecution in Christian lands.
But from the middle of the ninth century, the Khazars came under pressure from a new source: the Russians entered their long expansionary phase that was to last nearly a thousand years. Pushing towards the south and the southeast, they soon came into conflict with the Khazars. As the Russians converted to the Greek Orthodox Church, they formed an alliance with Constantinople.
This period also saw repeated invasions of Turkish tribes sweeping into the Caucasus and Asia Minor. Battered by these different forces, the Khazars were weakened and went into a decline that culminated in their defeat and dispersion in probably the 13th century, although sources are vague about the exact dates for these events. But it is certain that the Mongol invasion drove the final nail into the empire’s coffin.
In their three centuries of decline, many Khazar tribes migrated westwards into East Europe, and especially to Hungary, Poland and Lithuania. When Genghis Khan’s Golden Horde broke apart in the 14th century, the anarchy its disintegration spread forced many settled Khazars to move westwards for a living. Soon the steppes were emptied of farmers and craftsmen. Colonies were established in Russia and in other East European lands. The fact that as early as 1267, a Papal legate decreed that Jews should not be permitted to construct more than one synagogue per town indicates their growing numbers in Europe. It is Koestler’s thesis — and he is supported by many scholars — that most European, American and Israeli Jews today are descendants of the Khazars, and not the original twelve tribes.
In a concluding appendix, Koestler writes: “While this book deals with past history, it unavoidably carries certain implications for the present and future… [and] it may be maliciously misinterpreted as a denial of the State of Israel’s right to exist…” He goes on to say, quite correctly: “Whether the chromosomes of its people contain genes of Khazar or Semitic, Roman or Spanish origin, is irrelevant, and cannot affect Israel’s right to exist — nor the moral obligation of any civilized person, Gentile or Jew, to defend that right…”

However, having acquired their state, Zionists cannot really claim to be the ‘chosen people’, and occupy Palestinian lands on that basis. As we have seen, far too many have descended from The Thirteenth Tribe for them to lay claim to all the Promised Land.
[By Irfan Husain: http://www.dawn.com/weekly/mazdak/20050507.htm]
~~~~~~~~~~~~~

The theory that all or most Ashkenazi ("German") Jews might be descended from Khazars (rather than Semitic groups in the Middle East) dates back to the racial studies of late 19th century Europe, and was frequently cited to assert that most modern Jews are not descended from Israelites and/or to refute Israeli claims to Palestine. It was first publicly proposed in lecture given by the racial-theorist Ernest Renan on January 27, 1883, titled "Judaism as a Race and as Religion."[44] It was repeated in articles in The Dearborn Independent in 1923 and 1925, and popularized by racial theoristLothrop Stoddard in a 1926 article in the Forum titled "The Pedigree of Judah", where he argued that Ashkenazi Jews were a mix of people, of which the Khazars were a primary element.[26][45]Stoddard's views were "based on nineteenth and twentieth-century concepts of race, in which small variations on facial features as well as presumed accompanying character traits were deemed to pass from generation to generation, subject only to the corrupting effects of marriage with members of other groups, the result of which would lower the superior stock without raising the inferior partners."[46] This theory was adopted by British Israelites, who saw it as a means of invalidating the claims of Jews (rather than themselves) to be the true descendants of the ancient Israelites, and was supported by early anti-Zionists.[26][45]
In 1951 Southern Methodist University professor John O. Beaty published The Iron Curtain over America, a work which claimed that "Khazar Jews" were "responsible for all of America's — and the world's — ills beginning with World War I". The book repeated a number of familiar antisemitic claims, placing responsibility for U.S. involvement in World Wars I and II and the Bolshevik revolution on these Khazars, and insisting that Khazar Jews were attempting to subvert Western Christianity and establish communism throughout the world. The American millionaire J. Russell Maguire gave money towards its promotion, and it was met with enthusiasm by hate groups and the extreme right.[27][28] By the 1960s the Khazar theory had become a "firm article of faith" amongst Christian Identity groups.[26][29] In 1971 John Bagot Glubb (Glubb Pasha) also took up this theme, insisting that Palestinians were more closely related to the ancient Judeans than were Jews. According toBenny Morris:

Of course an anti-Zionist (as well as an anti-Semitic) point is being made here: The Palestinians have a greater political right to Palestine than the Jews do, as they, not the modern-day Jews, are the true descendants of the land's Jewish inhabitants/owners.[32]

The theory gained further support when the novelist Arthur Koestler devoted his popular book The Thirteenth Tribe (1976) to the topic. Koestler's historiography has been attacked as highly questionable by many historians;[31][47][48] it has also been pointed out that his discussion of theories about Ashkenazi descent is entirely lacking scientific or historiographical support; to the extent that Koestler referred to place-names and documentary evidence his analysis has been described as a mixture of flawed etymologies and misinterpreted primary sources.[49] Commentors have also noted that Koestler mischaracterized the sources he cited, particularly D.M. Dunlop's History of the Jewish Khazars (1954).[48] Dunlop himself stated that the theory that Eastern European Jews were the descendants of the Khazars, "... can be dealt with very shortly, because there is little evidence which bears directly upon it, and it unavoidably retains the character of a mere assumption."[50]
Koestler, an Ashkenazi Jew himself, was pro-Zionist based on secular considerations, and did not see alleged Khazar ancestry as diminishing the claim of Jews to Israel, which he felt was based on the United Nations mandate, and not on Biblical covenants or genetic inheritance. In his view, "The problem of the Khazar infusion a thousand years ago ... is irrelevant to modern Israel". In addition, he was apparently "either unaware of or oblivious to the use anti-Semites had made to the Khazar theory since its introduction at the turn of the century."