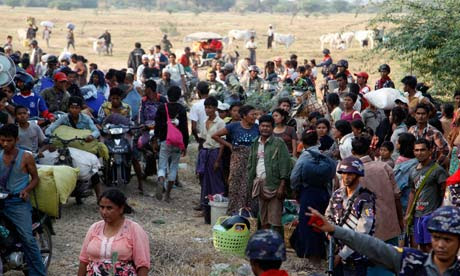 Thousands of people have been forced to flee their homes and shops after three days of ethnic violence in Burma Photograph: Khin Maung Win/AP. Burma has issued a state of emergency in the central city of Meikhtila after three days of ethnic violence between Muslims and Buddhists has left scores dead, forced thousands to flee and left local homes and shops reduced to smoking rubble.

Rioting began on Wednesday in the now ash-covered town, located 360 miles north of the commercial capital Rangoon, after an argument between a Muslim shopkeeper and his Buddhist customers erupted into a street brawl that ended with the death of a Buddhist monk.

Soon after, photos and videos of mobs roaming the streets were circulating online – showing streets littered with burning motorbikes, men armed with sticks and swords destroying property, and buildings set ablaze – with little indication that security forces were putting a stop to it.

The violence has called into question Burma's fledgling transition to democracy after a quasi-civilian government ended nearly 50 years of military rule in 2010. Led by reformist president Thein Sein, who has carried out a series of economic and political reforms – among them the lifting of censorship regulations and the release of many political prisoners – but the country has also witnessed a growing tension between majority Buddhists and minority Muslims, who comprise 5% of the 60m population.

Exact numbers of those killed and injured are hard to establish. Win Htein, of the opposition National League for Democracy party, said 20 people – including the monk – are confirmed dead. But Ko Wanna Shwe of the Rangoon-based Islamic Religious Affairs Council told the Guardian that figure was likely to be much higher: "We are getting reports from people in Meikhtila since Wednesday that [the number] is higher. Nearly 100 people have been killed – teachers, students, shopkeepers," he said by phone. "Even young men aged eight to 14 included."

Camps have been established to accommodate 2,000 people who have fled, Win Htein told Reuters, but it is not clear if they are protected by security forces.

Many fear the situation is a reprise of last year's violence in Rakhine state, western Burma, where hundreds were killed and 120,000 left homeless after two serious bouts of violence between Buddhists and Rohingya Muslims in June and October.

A stateless minority, the Rohingya are not recognised as Burmese citizens and many of them either live in segregated camps for internally displaced people or have fled by their thousands to neighbouring countries, often in makeshift boats. Rumours of a "third massacre" against the Rohingya have been circulating for months, with photos of alleged leaflets inciting violence posted on social media.

Rights groups on Friday described the situation in Meikhtila as a warning sign that Burma still has a long way to go to establish peace and reconciliation in a country that proscribed dissent for nearly half a century, and called for the government to put an end to the violence.

"The key issue is this: the government has frankly failed to stare down the people who are inciting hatred, the people who are engaging in this communal violence … and that failure has set an example that impunity to attack Muslims is alive and well in Burma," said Phil Robertson of Human Rights Watch. "There's a major army base in that town. If people are engaging in rioting and attacks, then they could be stopped. So why does violence continue on now for two days or so? There's either a complete lack of capacity or a failure of political will because Buddhist monks are involved."

Burmese monks have often been involved in sectarian violence, with anti-Muslim protests in Mandalay led by the saffron-robed religious leaders last year. Meikhtila is no different. One monk, who wielded a foot-long sword, threatened an Associated Press journalist and demanded his camera, while other monks attempted to drag a group of reporters out of a van. "We don't feel safe and we have now moved inside a monastery," one Meikhtila resident told the AP. "The situation is unpredictable and dangerous."

Both the UN and Burma's opposition leader, Aung San Suu Kyi, called for order to be restored; the town was still burning on Friday evening. Suu Kyi has come under severe fire for her handling of the Rakhine situation last year, which some activists termed a genocide against the Rohingya, and earlier this month she backed a controversial copper mine in Letpadaung.

It is unclear exactly why this latest bout of ethnic violence escalated so quickly. Win Htein, the lawmaker for the NLD, told Radio Free Asia that he believed that some Muslims in Meikhtila – who comprise one-third of the population of 100,000 – may have been harbouring "some feelings over the Rakhine problem", thereby fomenting unrest.

But it may just be one example of violence in a nation that could see many others take place in relatively quick succession, said Mark Farmaner of human rights group Burma Campaign UK.

"We've seen examples of anti-Muslim propaganda in Mon state, Shan state, Kachin state and Karen state, where people are distributing anti-Muslim leaflets," he told the Guardian. "It may not be directly linked to violence in Rakhine state in an obvious way but … aan incident like this [an argument in a gold shop] wouldn't normally lead to deaths and thousands of people trying to flee, if there weren't already incredibly high tensions in the first place. That means it's been organised and that no action has been taken to put a lid on it." President Tun Khin of the UK-based Burmese Rohingya Organisation described the violence in Meikhtila as a state-sponsored attack, and said: "These are not communal clashes; this is not equal sides fighting. These are organised attacks to cleanse [Burma] of Muslims where the vast majority of those killed and displaced are Muslims … There should be laws on racism if the government wants to see durable peace in Burma."
By Kate Hudal: http://www.guardian.co.uk/world/2013/mar/22/burma-ethnic-violence-dead-meikhtila?INTCMP=SRCH


Bad days in Burma
Nobody disputes the fact that about 100,000 Rohingyas (out of a population of 800,000) are now internal refugees in Burma, while others have fled across the border into Bangladesh. As you would expect, the Buddhist monks ...
Genocide, Ethnic Cleansing of Muslims in Myanmar ...
The Turkish foreign minister and wife of Turkish Prime mister visited oppressed Muslims of Burma to console and help them. Turkey is a secular country with Muslim majority but; Where are the so called the leaders and rulers ...