The Concept of Bid'a in the Islamic Shari'a- An Opinion 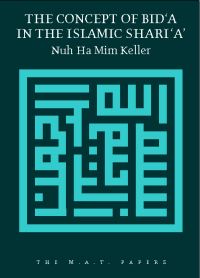 is sunna and what is bida or reprehensible innovation, perhaps because of the times Muslims live in today and the challenges they face. Without a doubt, one of the greatest events in impact upon Muslims in the last thousand years is the end of the Islamic caliphate at the first of this century, an event that marked not only the passing of temporal, political authority, but in many respects the passing of the consensus of orthodox Sunni Islam as well. No one familiar with the classical literature in any of the Islamic legal sciences, whether Qur'anic exegesis (tafsir), hadith, or jurisprudence (fiqh), can fail to be struck by the fact that questions are asked today about basic fundamentals of Islamic Sacred Law (Sharia) and its ancillary disciplines that would not have been asked in the Islamic period not because Islamic scholars were not brilliant enough to produce the questions, but because they already knew the answers.
My talk tonight will aim to clarify some possible misunderstandings of the concept of innovation (bida) in Islam, in light of the prophetic hadith,

For full text of a talk given by Shaikh Nuh Ha Mim Keller at Nottingham and Trent University on Wednesday 25th January 1995: http://www.masud.co.uk/ISLAM/nuh/bida.htm