To the tyrants of the Arab [and also Muslim] world...

The Arabs are listening [and oppressed Muslims all around world toooooo]
The people of Tunisia have spoken and, most significantly, the Arab people are listening. 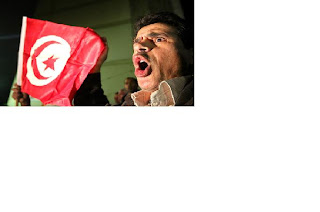 The Tunisian protests have already triggered peaceful demonstrations in Jordan, where people have protested over inflation and government efforts to undermine political liberties and press freedoms and have demanded the departure of Samir al-Rifai, the prime minister.
The government, seemingly concerned by the unfolding developments, sought to appease popular discontent by reversing what had been the ninth increase in fuel prices since 1989. But it was too little, too late, particularly as food prices continue to rise, and Jordanians are expected to continue their demonstrations over the coming weeks.
The government would do well to learn from Tunis that repression by the security forces can no longer solve its problems and guarantee the consent of its citizens.
In Egypt, the opposition Movement for Change appears to have been reinvigorated by the events in Tunisia. And in Arab capitals, from Sana'a to Cairo, the people are sending a message to their own governments, as well as expressing their support for the Tunisian people, by organising sit-ins in front of Tunisian embassies.
Arabs of all generations are also expressing their sentiments online - not only congratulating Tunisians but also calling for similar movements in their own countries. And on Facebook, many have replaced their profile pictures with images of the Tunisian flag, as though draping themselves in the colours of an Arab revolution.
Fear and jubilation
The failure of one of the Arab world's most repressive security forces to quell people power has been met with jubilation. Bloggers have compared the event to the fall of the Berlin wall, suggesting that it will usher in a new era in which the Arab people will have a greater say in determining their future.
Mohamed Bouazizi, the young Tunisian who set himself on fire in protest against unemployment and poverty, has become a symbol of Tunisian sacrifices for freedom.
Activists across the region have called for the "Tunisation" of the Arab street - taking Tunis as a model for the assertion of people power and aspirations for social justice, the eradication of corruption and democratisation.
But the celebratory atmosphere dominating the blogosphere and wide sectors of Arab society is tainted by a prevailing sense of caution and fear: Caution because the situation in Tunis remains unclear and fear that there may be a coup d'état, which would impose security but stifle popular aspirations.
Whether the Tunisian uprising will succeed in bringing about radical reforms or be partially aborted by the ruling elite remains to be seen. But it has already empowered people across the Arab world to expose the fallacy of regimes that believe adopting a pro-Western agenda will enable them to fool their people and guarantee their longevity.
History has shown that security forces can silence people but can never crush the simmering revolt that lies beneath the ashes. Or in the words of the beloved Tunisian poet Abul-Qasim al-Shabi in his poem To the Tyrants of the World:
Wait, don't let the spring, the clearness of the sky and the shine of the morning light fool you ...
Because the darkness, the thunder's rumble and the blowing of the wind are coming toward you
from the horizon
Beware because there is a fire underneath the ash
Lamis Andoni is an analyst and commentator on Middle Eastern and Palestinian affairs.
The views expressed in this article are the author's own and do not necessarily reflect Al Jazeera's editorial policy.
http://english.aljazeera.net/indepth/opinion/2011/01/2011115135046129936.html
Comments:
This is just a tip of the iceberg, Muslims are oppressed all around the world with only few exceptions like Malaysia, even in Turkey the oppressive policies of pseudo secularists still continues.. This is warning to all those oppressing the the poor people [Muslims], the reign of tyranny, oppression and corruption in cooperation and full support of USA and West with will not last long.