CIA Drones Killed Over 2,000, Mostly Civilians in Pakistan Since 2006- now American are killing Pakistanis at streets of Lahore

Report: CIA Drones Killed Over 2,000, Mostly Civilians in Pakistan Since 2006

by Jason Ditz, January 02, 2011
A new report from the Conflict Monitoring Centre (CMC) has reported that 2,043 Pakistanis have been slain in CIA drone strikes in the past 5 years, with the vast majority of them innocent civilians.

The report notes that the attacks target Pakistan’s Federally Administered Tribal Areas where “people usually carry guns and ammunition as a tradition. US drones will identify anyone carrying a gun as a militant and subsequently he will be killed.” Pakistan’s government, which has only a nominal presence in the region, traditionally brands anyone killed by the US a “suspect.”
And while 2,043 is a lot of people to kill in the past five years, over 75% of them were actually killed in the past two years since President Obama took office. 2009 saw over 700 people killed in the CIA drone strikes, and the report shows 929 more killed in 2010.
Drone strikes were a comparative rarity when President Bush was in office, but have been dramatically and repeatedly escalated by President Obama, usually in retaliation for attacks by militant groups. This has led CMC to term the program an “assassination campaign turning out to be a revenge campaign.”
The enormous number of civilian deaths goes largely ignored by officials, who insist, on those rare occasions when they will even cop to the programs at all, that they are “very accurate.” The identities of the victims is rarely apparent at the time of the attacks, of course, and it seems there is very little interest in following up with them after the fact, except on the occasions when NGOs point out how many of the victims are just random tribesmen.
http://news.antiwar.com/2011/01/02/report-cia-drones-killed-over-2000-mostly-civilians-in-pakistan-since-2006/

Court to rule on US gunman who murdered 2 Pakistanis

Supporters of the religious and political party Jamaat-e-Islami hold a banner that reads "Pakistani Demand to Hang Raymond Davis Immediately" while praying during a protest rally in Karachi January 30, 2011. – Photo by Reuters
ISLAMABAD: Pakistani President Asif Ali Zardari said Monday the courts should decide the fate of a US government employee, under investigation for double murder, after US lawmakers pressed for his release.
Six representatives of the US Congress asked Zardari to free Raymond Davis, who was arrested after killing two Pakistani motorcyclists in broad daylight on the streets of Lahore, in what the American said was self-defence.

“It would be prudent to wait for the legal course to be completed,”Zardari’s office quoted him as saying during the meeting, which the US embassy said was planned before last week’s killings.
Spokesman Farhatullah Babar said that while the president “appreciated” the Congressmen’s concern “the matter was already before the courts”.
The US embassy in Islamabad has requested Davis’ immediate release, calling him a consulate employee and claiming diplomatic immunity on his behalf.
Pakistan’s courts have refused to release the gunman, who claims he acted in self-defence to fend off an armed robbery.
A third Pakistani was crushed to death by a consulate car that went to help Davis following the shooting in a busy street in the eastern city of Lahore.
A Pakistani lawyer earlier Monday petitioned the Lahore high court to block any move to hand Davis over to the United States.
“Since two Pakistani men were killed and the third one died in the related accident, and panic was caused because of the actions of Raymond Davis, his trial should be held in Pakistan,” said the lawyer, Saeed Zafar.
A court official said that the Lahore chief justice “issued notices” to the country’s top prosecutor to seek government advice and respond on Tuesday.
The US embassy says Davis — whose exact status is unclear — was a member of the “technical and administrative staff” at the embassy.
Anti-US sentiment is high in Muslim country Pakistan, fanned by a US drone campaign in its northwest that has provoked deadly attacks by militants. – AFP

Counterproductive Drone Attacks in Pakistan Creating more Hatred for US 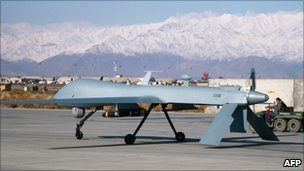