Mercenaries: The Soldiers of fortune 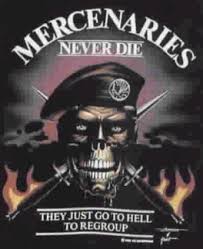 For centuries, armies have fought wars with the help of special contingents of soldiers known as mercenaries, who fought for money. They had no moral, national or religious reasons for going to war, nor did they pledge loyalty to any ruler. Their only interest was to sell their services and risk their lives for wealth.
It was customary that whenever rulers went to war they recruited soldiers in their army from different sections of society. Most of them were peasants who joined the army either due to the compulsion of the state or were tempted to acquire their share from plunder and pillage. Other groups who joined them were either the poor or unemployed youth.
When the war was over, those who served in the army became jobless. Generally, farmers would return to their fields, but those who had no land searched for a job and became mercenaries. In ancient Greece, after the Greco-Persian
and the Peloponnesian wars, a large numbers of soldiers became unemployed. Since they spent their time in warfare, they were no longer in a position to adopt any other profession. After gaining experience in fighting, they became hard core soldiers, with no respect for human life.
Xenophon of Athens was a Greek historian, a soldier, mercenary and a student of Socrates. He joined a group of 10,000 experienced and well-equipped Greek soldiers hired by Cyrus, the Younger; a Persian prince who wanted to fight against his brother Artaxerxes (d.424 BC) for occupying the throne and becoming the king of Persia.
Ten thousand mercenaries marched alongside Cyrus and his army to Mesopotamia, where the war took place. The Greek soldiers fought bravely and were about to defeat the enemy, but Cyrus was killed in the battle, creating disorder and confusion in his army. Losing their patron, the Greek soldiers remained in the battlefield and decided to negotiate with the victor for peace terms. Artaxerxes asked them to send their leaders  for negotiation but instead he betrayed and killed them. Upon hearing this news, the Greek soldiers designated Xenophon as their leader and marched back to Greece.
After a long and arduous journey, only six thousand out of ten thousand survived and reached their homeland. Xenophon retired and spent his life in peace but the mercenaries were ready to undertake another assignment to fight.
In the subcontinent, after the fall of the Mughal Empire, there was political disorder and chaos. Having no military power, the rulers of small states failed to get revenue from the villages, while caravans of traders were threatened by bandits and robbers on highways.
Under the circumstances some military adventurers, organised armed groups and sold their services to anyone who would pay them. Rulers of small states hired them to collect revenue from rebellious peasants; traders hired them for protection against dacoits and they were also used in fighting against rivals. When they had no option to loan their services, they worked independently to plunder cities.
Mohammad Amir Khan (1834) is an example of one of those who collected armed soldiers and fought for high remuneration. His soldiers served under the Maratha leader Holker. He also fought a number of battles against the British army of the East India Company. Later, he concluded a peace treaty with the British who in return awarded him the state of Tonk.
In the 19th century, taking advantage of the political situation in the subcontinent, a large number of European mercenaries arrived in India; welcomed by the Maratha and the Sikh rulers. Some of them were French soldiers who had become unemployed after the defeat of Napoleon in 1815. They trained the Maratha and Sikh armies on a European model and some of them chose to settle in the subcontinent after marrying local women. Later, several returned to their  homeland in Europe, after making huge amounts of money to spend the rest of their lives in luxury.
The story of George Thomas, an Irishman, is very interesting. After arriving in India, he gathered around him a company of faithful soldiers who accumulated wealth by fighting as mercenaries. Later, he built a fortress known as Thomas Garh and minted his own coins, following the pattern of a petty ruler. Culturally and socially, he became a native. When an Englishman interviewed him, he spoke in Persian. Their role as mercenaries ended when the East India Company established its rule in the subcontinent.
Switzerland supplied mercenaries to European rulers. The Papal Swiss Guard was founded in 1506 and exists to the present day. Groups of soldiers similar to mercenaries offered their services especially in Africa where war is endemic among tribes and states. Even the United States employes the services of Blackwater, an organisation that can be described as providing mercenary soldiers, dubbed ‘contractors’ to make the term more politically correct. Throughout history, brutal, ruthless and cruel mercenaries were involved in wars, damaging the society and making conflicts more horrific. Ready to earn wealth at the cost of their lives, they will continue to exist as long as war remains a solution to problems and conflict.