What Went Wrong With Muslims?

In 1770 the Turkish naval establishment was wiped out at the Battle of Çeşme (on the coast of the Mediterranean Sea) by a Russian fleet. (EB, 13/784). In 1799 the Fourth Mysore War took place between Tipu Sultan and the British East India Company at Seringapatam. In this war, Tipu Sultan was killed. When the Governor General, George Harris, heard of the death of Tipu Sultan, he is said to have exclaimed: “Today, India is ours!”
These two events symbolize the beginning of the end of Muslim political glory in the modern age. There were a series of such events everywhere in Muslim countries. The Muslim leadership of that time strongly reacted to this disturbing phenomenon. But history shows that, in all their attempts, they totally failed to achieve their goal. First, there were complaints, then protests, followed by violence, then the gun culture, and lastly suicide bombing. In short, this is the scenario of more than two hundred years of Muslim struggle. What is happening in Egypt is only the latest manifestation of this unsuccessful Muslim activism. 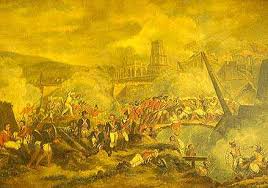 Now the time has come to reassess this long failed struggle. There is no justification for continuing this pattern of resistance. That will only lead to more losses. An unbiased study tells us that those western powers which Muslims considered enemies were, in fact, not enemies, but harbingers of a new civilization. It was the western nations who had developed this new civilization and it was bound to spread out across the world. But there were two aspects to this. One was the political dominance of western nations, and the other was that they had brought to the world an age of new science and technology, and new industry. The traditional world was then transformed into a new world, which resulted in a change in the balance of power. The mistake that Muslim leaders made was that they failed to understand this duality.
They took it as simply a political phenomenon and they waged a political war against these western nations. In this situation, the best policy for Muslims would have been to differentiate between politics and civilization. The better choice would have been to avoid the political problem and take into account the non-political aspect of western expansion, that is, the civilization ushered in by the West, based on scientific discoveries and modern technology.
It was this policy that was adopted by the Japanese after the Second World War, and within less than fifty years they emerged as an economic superpower. The same option was opened up for Muslim nations. They should have avoided the political problem and availed of the civilizational opportunities. Had the Muslims done this, history would have taken a different course. Instead of being a protestant community, Muslims would have emerged as a successful community.
This creative policy is an Islamic policy and the Prophet of Islam was the first in history to adopt it. During the negotiations prior to the signing of the Hudaybiyah Treaty, he avoided political problems and tried to avail of whatever opportunities presented themselves at that time. Thus he went on to have that great success which is mentioned in the Quran as a ‘clear victory’ (48:1).
Now, in the twenty-first century, the time has come for Muslims to adopt the policy of U- turn. They must bring to an end all violent activities and should devote their energies to achieving a two-point formula of education and dawah. Education will bring their succeeding generations into line with modern standards, and dawah work will provide them with a global mission through which they will be able to chalk out a proper line of action for themselves. Here I would like to refer to two verses from the Quran: “O Believers, turn you all together towards God.” (24:31). Tawbah means following a U-turn policy. It means that Muslims must adopt such a policy at the level of the entire community. The other Quranic verse is: “God does not change that which is with a people until they change that which is with  themselves.” (13:11). This means that if Muslims want to see a new future, they must change their present.
By: Maulana Wahiduddin Khan