The consortium of terror: Taliban & Co

Despite hundreds of attacks and the deaths of thousands of Pakistanis, there is still a great deal of confusion about the number, nature and end goals of the militant organisations operating in Pakistan. For some, they remain figments of a fevered imagination. To others they are proxies of foreign powers. 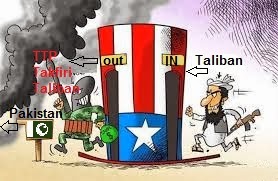 This belief has not come out of the blue. It is part of an obscurantist narrative the state itself created and propagated. The problem with this narrative is that while it may have delegitimised some jihadi groups within public ranks, it is counter productive in the long run for a number of reasons. First of all, it fails to address the very ideology that promotes militancy and hence the state’s failure to present an effective counter-ideology. Secondly, the jihadi groups simply have to prove that the state-promoted narrative is a “baseless lie” to win recruits, as indicated by scores of interviews of jihadis. The fact is that these groups are very much in existence and the ones who carry out attacks against Pakistan’s civilians and armed forces have a clear and stated objective: to dominate and overthrow the Pakistani state.

Unfortunately, the state has also promoted a concept of “good” and “bad” militants. This narrative itself has been problematic. There are often strong links between the “good” and “bad” jihadis that also take the form of material, logistical, manpower and other support.

As Pakistan debates engaging the Islamist militants in the tribal areas and beyond, it is imperative that the policy-makers as well as the public understand the militant groups and their interrelations.

The following is an interactive of the militant landscape of Pakistan. Click on each group for more information:

A small organisation affiliated with the TTP. Its primary focus is targeting armed forces personnel and politicians. Among others, the group is responsible for the killing of the former Khyber Pakhtunkhwa Law Minister Israr Gandapur. As with AQ and TTP, Ansar al-Mujahideen aims to turn Pakistan into an “Islamic State” and use the state to launch “jihad” against other belligerent states.

Formed in the early 90s in Afghanistan, the group has been primarily operating in Indian-held Kashmir. It seeks to “liberate” the people of Kashmir from “Indian oppression” and establish an Islamic state” in the region.

It sees India, the United States and Israel as eternal enemies of Islam and boasts about defeating them through armed struggle. Hafiz Muhammad Saeed, the head of Jamat-ud-Dawa denies that his charity is simply a cover for the banned militant outfit. However the lower cadre not only acknowledges their connection with LeT but proudly boast about their operations in India.

In line with their particular brand of Salafism, the organisation is strongly opposed to rebellion against the Pakistani state. They say that while the ruling elite are living in a state of sin, rebelling against them is not permissible. Largely avoiding questions about other Muslim sects, the LeT says there should be unity within the Ummah and the priority should be to target the “real enemy” — the US, India and Israel, as they say.

Members of the group say they are bracing themselves for the Ghazwa-i-Hind — a grand war in which Muslims will regain control of India, they claim.

Jaish-e-Muhammad was formed in 2000 by Maulana Masood Azhar. Shortly after its inception, it effectively swallowed a previously existing but now largely defunct Harkat-ul-Mujahideen (HuM). Its primary goal is to “liberate” Kashmir from Indian rule and it has carried out various attacks on Indian interests including the 2001 attack on Indian parliament. The group was banned by then President Pervez Musharraf and rebranded itself as Khuddam-ul-Islam. It continues to engage in open fundraising outside many Pakistani mosques on Fridays.

The group emerged as an offshoot of Jaish-e-Muhammad after serious differences emerged between various commanders. TGI is led by Commander Abdul Jabbar and operates primarily in Afghanistan.

Publicly, the organisation opposes rebellion against the Pakistani state. It stresses on its cadre to focus on Afghanistan.

The group has recently emerged in parts of Balochistan bordering Iran. It has targeted Shia Muslims and claims to be countering Iranian interference in Pakistan. The group also seeks to extend the theatre of war into Iran.

The group was formed in the 90s in response to the anti-Shia violence perpetuated by Sipah-i-Sahaba Pakistan (SSP). It maintains a very low profile and seeks to primarily target leaders of anti-Shia militant organisations such as SSP and LJ. Its leader Syed Ghulam Raza Naqvi has been in prison since the mid-90s. Pakistani intelligence agencies claim the group is backed by Iran in a bid to extend its influence in the region.
BY HASAN ABDULLAH: http://www.dawn.com/in-depth/militants-landscape
RELATED: