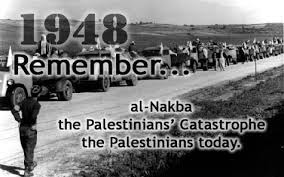 For 63 years, the situation has dragged on, men and women holding the papers and keys to their former homes, clutching the faded and cracked photos of happier days: everything rendered obsolete by the artificial creation of a state for a foreign people on land that has been home to Palestinians for millennia.
But if that is too distant in time and complex to touch your heart, then imagine for a moment yourself, wrenched from all that is familiar and everything you love, hastily running into the unknown grabbing only what you can carry from all the personal effects and mementos accumulated over years, ever certain you will soon return, even if it is to pick up the pieces shattered by war or disaster to begin again. 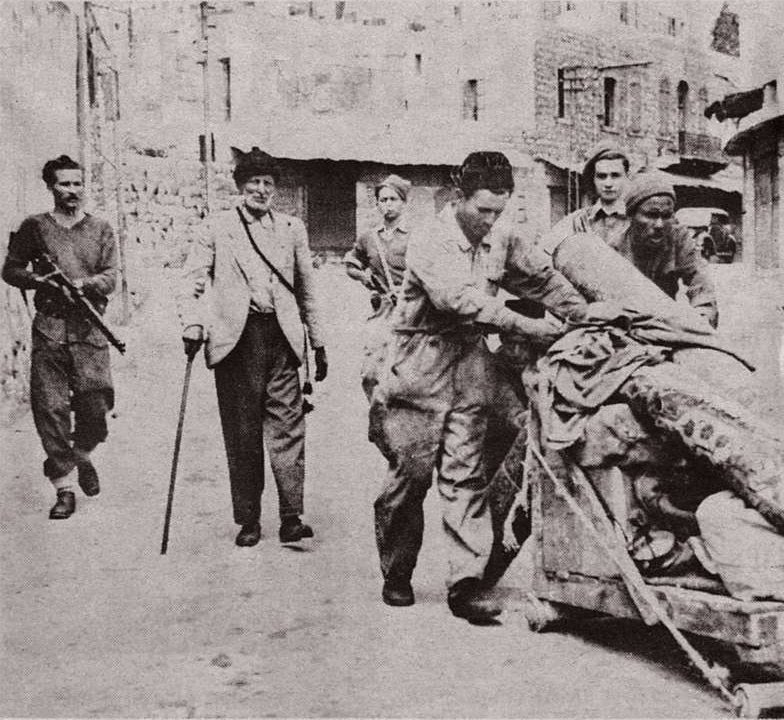 Think of yourself going back only to find someone else opening your front door and shamelessly banging it shut on the pleas you should not have to make.
Think of your street and neighbourhood, the same and yet not the same, as everything that once was so familiar is now given over to a people who have never walked before in the footprints of your forefathers.
Think of the sounds and smells that always make your coming home a moment filled with pleasure while now they make you shudder at the thought of others planning around your hearth.
Think of pleading with authorities and institutions which have no interest in your displacement, but would see you gone forever, pretending you never existed at all.
Think of yourself waiting the interminable wait while nation builders and destroyers discuss and negotiate ever-shifting borders and endless conditions in a process called peace, oblivious of your life, dismissed, despised and rejected.
Think of the eyes of your children and children’s children wondering what you have done and what they have done, to be stripped of dignity, honour and the most basic of human rights in a world that presumes to value only the rights of those of their choosing.
Think of what it must be like to be one of the world’s most wretched of surplus humanity for no other reason than that you exist, in spite of what others have done and do for advantage and plunder.
Think of yourself and wonder if life had been different would you treat others the same?
Can you now stand by and watch seven million Palestinian refugees feel and think and act like you and not do anything to stop the 63 years’ worth of injustices?
Eleven million Palestinians today around the world have not forgotten. Their collective memory remains undimmed, as each generation carries the Palestinian loss forward, always in anticipation of resolution.
Eleven million Palestinians stand today as silent testimony to all that matters in who we are and what we do. They have not vanished, but have multiplied and they will keep on multiplying until the last frontier. Perhaps we might yet see that the worth of our being depends on theirs and that the salvation of their condition will be the salvation of our own. In the meantime, their Nakba continues uninterrupted by hollow reconciliations and declarations of statehood – killings, evictions, transfers, imprisonment and the daily humiliations of unfettered power and our miserable silence.
“And who listens to the stories of those men, women and children who are taken by their displacement to that other shore from which no one ever returns? Our dead are scattered in every land.
And if the dead by displacement . . . are martyrs, and if the poems are true and each martyr is a rose, we can claim to have made a garden of the world.” (Mourid Barghouti “I saw Ramallah” p 161)
By Sonja Karkar, co-founder of the Melbourne advocacy group Australians for Palestine and editor of its news website www.australiansforpalestine.com. She contributed this article to PalestineChronicle.com.
http://palestinechronicle.com/view_article_details.php?id=16867
Related Links:

THE NAKBA NO NO: Hebrew textbooks focus chiefly on the success of Israel’s troops during the 1948 war. The books say that the 750,000 refugees either left voluntarily or were ordered to leave by Arab armies. Most historians now say that Israeli troops either physically expelled the Palestinians or frightened them so much that they fled. Israel tells schools not to teach Nakba: http://desertpeace.wordpress.com/2010/08/22/the-nakba-no-no/
Ten facts about the Nakba :"The people of New Orleans woke up one morning to complete devastation and had to flee. The Nakba was our Hurricane Katrina." Abe Fawal, Birmingham, Alabama....


The Protocols of the Elders of Zion & Conspiracy Theories
Recent endorsements in the 21st century have been made by the Grand Mufti of Jerusalem, SheikhEkrima Sa'id Sabri, and the education ministry of Saudi Arabia. In 2010, Italian philosopher Umberto Eco released his novel The Cemetery of....
The Rights of Israel حقوق ...
Moreover, and in addition to the continuing confiscation of Palestinian lands inside Israel, in East Jerusalem, and in the West Bank, Israel has extended it discriminatory laws and enacted new ones to privilege the colonising Jewish ..

Ramzy Baroud writes: Palestinians continue to reel under the pain of past memories, present hardships and an uncertain future .....
Al Nakba, an unforgiving reality