The Paris massacre and its fallout 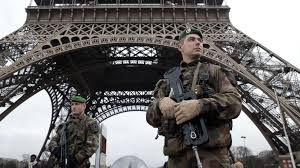 WHEN French President Francois Hollande issued a declaration of war against the self-styled militant Islamic State group in the aftermath of the recent bloody attacks in Paris, he perhaps forgot that France has been at war with these terrorists for over a year. Ever since France joined the US-led coalition last year, the French air force has been regularly bombing targets in Syria.

And before this campaign, French forces have been active in Libya and Mali. So while I was horrified by the slaughter IS, also known by its Arabic acronym Daesh, has carried out in Paris, I was hardly surprised. In politics, just as in physics, Newton’s third law of motion applies: to every action, there is an equal and opposite reaction. In politics, the reaction is not as immediate or as easily quantifiable as in physics, and can come in a different form, and may take years, but sooner or later, it does surface.

Thus, much of the mayhem and madness we witness in the Middle East is happening as a result of Western policies and wars in Afghanistan, Iraq, Syria and Libya, to mention only a few Muslim states. By upsetting the delicate balance between Shias and Sunnis, the Americans and their allies have triggered a violent sectarian conflict in which the two sides are backed by Saudi Arabia and Iran respectively. IS can trace its beginning to the early days of the Syrian civil war when jihadists were openly supported by the US, Turkey, Saudi Arabia, Kuwait and several of the Gulf states.

None of this is meant to justify or defend the bloody campaign carried out by IS; the idea is to explain the context in which this violence is taking place, as well as the birth and startling growth of the jihadist movement. Beginning life as Al Qaeda in Iraq during the American occupation, it earned a fearsome reputation for the bloodbath it triggered against Shias, as well as its attacks on American and Iraqi forces. The Americans responded by killing its leader, Abu Musab al-Zarqawi, a Jordanian petty criminal who drew a rebuke from the Al Qaeda leadership for his excessive violence. After his death, he was replaced by Abu Bakr al-Baghdadi. By the time the Americans pulled out, Al Qaeda in Iraq was seen as a spent force.

However, when the civil war in Syria broke out, the organisation gained a toehold there and soon became the dominant force among the various groups fighting the Assad regime. Following a split with Al Qaeda, Baghdadi renamed his group the Islamic State after it swept across the border and captured Iraq’s second biggest city of Mosul. He also announced he was the caliph of all Muslims. In Mosul, the jihadis grabbed a rich haul of American arms including tanks and heavy artillery. They also looted the Iraqi state bank of a billion dollars.

Since then, they have been highly effective in their recruitment drive on social media that has attracted thousands of young Muslims from around the world. A significant number of these came from France and Belgium. When the fighting in Syria drove hundreds of thousands to seek asylum in Europe, there is little doubt that several IS militants joined them to gain entry into countries like France.

As it is, France is home to the biggest concentration of Muslim migrants in Europe. A large number of them, especially the young, feel marginalised and discriminated against. Unemployment is very high, and they mostly live in bleak, depressing council flats that have come to resemble vast ghettos where the police are reluctant to enter. From time to time, riots erupt, and there are well-meaning vows to improve conditions in these depressed areas. But little actually happens, and young Muslims lose whatever hope for the future they might have had.

Many turn to crime, and when they are arrested and jailed, they come across members of jihadist organisations, and are recruited to their cause. Others are radicalised on the internet. Few, it would seem, are influenced in mosques that are now heavily monitored by security services.

There has been much criticism of French and Belgian intelligence services for letting several of those involved in the Paris massacre slip though their fingers, even though they had been on the anti-terror radar. They are also accused of ignoring warnings of an impending attack. But the truth is that terror threats are now so common that it’s hard to react to each one received from friendly intelligence agencies. And there are now literally thousands of suspects on the watch-lists maintained by security services, making it impossible to monitor every one of them. Prioritising them is essential to allocate resources, and often, somebody deemed to be a low risk individual turns out to be a key figure in an attack.

In the wake of the Paris attacks, French leaders have promised to tighten up security laws. Already, a three-month state of emergency is in force. Borders have been sealed, and the Schengen agreement that permits the free movement of EU citizens and those with Schengen visas has been suspended. It is very likely that the agreement might well be scrapped.

Suddenly, it’s a very different Europe, with fear and anger stalking the land. Angela Merkel and her generous open-door policy for asylum seekers stand repudiated. If anything, the reaction in the US has been even more extreme than in France, with 24 governors announcing they will not permit Syrian asylum seekers to be settled in their states. A bill has just been passed in the House of Representatives, calling for rigorous scrutiny of asylum seekers. Extreme rhetoric bordering on racism is being heard from Republican presidential candidates.

And for those of us who seek to justify the Paris killings, here’s a question: had a group of, say, Christians carried out a massacre in Lahore on the scale Paris has witnessed, what would have been the reaction of the public and the state?
By Irfan Hussain Dawn.com
http://www.dawn.com/news/1221523/view-from-abroad-the-paris-massacre-and-its-fallout

Telegraph.co.uk‎ -
... as search for Paris attacks fugitive Salah Abdeslam and 'several others' goes on - latest.