A mostly overlooked history of harm. It is possible to think only Islam is susceptible to religious violence and forget about centuries of intermittent Christian violence. Ninety-nine percent of Christians have never performed religious violence, and yet there is a history to recall. 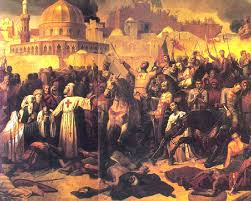 Witches: mostly women, executed in the tens of thousands during the European satanic panics of the 1400s, 1500s, and 1600s. To make matters worse, there was no such thing as a 'witch.' Unbelievers: those unconvinced by the evidence for God and hounded, menaced, tortured, executed. Savages: pejorative name given to aboriginal peoples all over the globe who had their own ancient religious traditions but might be hounded, menaced, enslaved, tortured, executed. Fellow Christians: hounded, menaced, tortured, executed in the denominational religious wars of 1600s Europe.
Small Children: sexually abused by a few clergy. All these victims failed to feel the touch of human decency in the pitiless piety of holy madmen. Victims: whose tongues were severed, whose heads were dashed, whose limbs were burned by wax and fire, who ached upon strappado and rack, who suffered libels and lies, who were raped in prepubescence. Readable names of the victims will include Bishop Pricillian, Geoffrey Valle, Domenico Scandella, Christine Boffgen, Pietro Pompanazzi, Lucilio Vanini, Noel Journet, Francscius Cuperus, Aluise Capuano, Girolamo Cardano, Pierre Charron, Pomponino Rustico, Michael Servetus, Giordano Bruno, Charles Blout, Thomas Aikenhead, and many, many more. Beneath these names engravers will scratch symbols signifying thousands more of the nameless victims.
And finally, beneath all else, they will etch emblems for the thousands of unknown children, spouses, siblings, and loved ones of those killed or maimed, for these unknown lives too had been devastated. Once the memorial is completed, we will see a silent, massive crowd press into St. Peter's Square, among whom, let us hope, will be leaders of all Christian denominations and ordinary Christians from all sects. In the window above the basilica the Pope will intone a solemn litany: 'We do penance for the murder of Bishop Pricillian.' The people will beat their chests and reply, 'We are heartily sorry.' 'We do penance for the murder of Geoffrey Valle. -We are heartily sorry.' 'We do penance for the murder of Christine Boffgen. -We are heartily sorry.' 'We do penance for the murder of Giordano Bruno. -We are heartily sorry.' And on and on--of the known names.
And then to the unknown: 'We do penance for the unknown killed or maimed in God's name. -We are heartily sorry.' And this will be said over and over again. After the litany, which may last days, the Pope will address the Christian world with these words: 'It is a credit to the decency of the vast majority of Christians in each generation of Christianity that they did not act violently in the name of God. Unfortunately a tiny minority of Christians in every age of Christianity, let us call them the rare and the deviant, the fraction-of-one-percent of Christians, did act violently. We repent of their sins. And now, to our Penance: Our atonement for The Centuries of Violence will be A Century of Silence, as we learn Bittul ha-tamid, the Jewish practice of ceasing liturgical worship in order to seek redress for moral wrongs. Churches: Orthodox, Catholic, Protestant, will be draped in black, their lights dimmed.
Devotees may enter the sanctuaries, but no speech is to be uttered. No words of liturgy. No spoken prayers. No hymns. (Better to right a wrong than sway in the Holy of Holies). There will be no published works. No theology. No encyclicals. Not a word from the Churches for one hundred years. All this in Penance for the murder, for the maiming, and for the honor, of the victims.' And all the people in all the denominations, and all the leaders of all the denominations, will bow in agreement with the Penance. His Holiness will end citing a verse of scripture, breathed solemnly before a one-handed gesture of the cross traced into thin air: 'Omnis qui odit fratrem suum homicida est' --St. Jerome's Vulgate translation of 1 John 3:15. 'Everyone who hates his brother is a murderer.'