Donald John Trump (born June 14, 1946) is an American business magnate, television personality, and candidate for President of the United States in the 2016 presidential election. He is the chairman and president of The Trump Organization and the founder of Trump Entertainment Resorts. Trump's career, branding efforts, lifestyle, and outspoken manner helped make him a celebrity, a status amplified by the success of his NBC reality show.
Accused to be racist, Muslim hater could be next president of USA, the most powerful man. Some dismiss him just by saying; "Trump is a fool".... but he is getting popularity after declaring to Ban Muslims from entering USA.... let;s know who is Donald Trump? 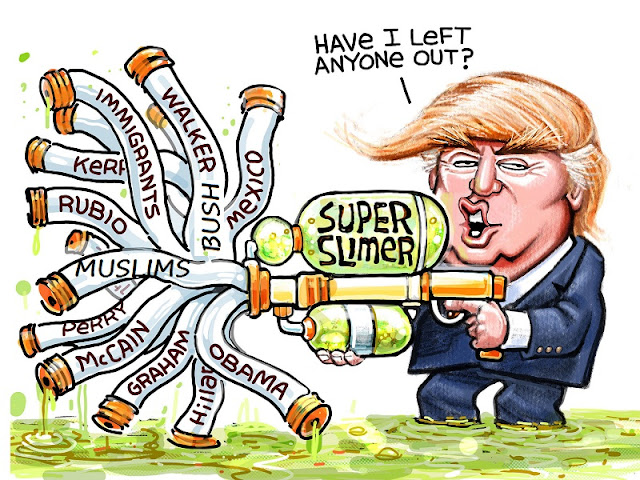 Allegations of business with firms linked to organized crime
Pulitzer Prize-winning journalist David Cay Johnston as well as investigative journalist Wayne Barrett, who wrote an unauthorized 1992 Trump biography, have alleged that Trump and his companies did business with New York and Philadelphia families linked to the Italian-American Mafia. They claim Trump purchased the future site of Atlantic City's Trump Plaza for twice its market value from the Philadelphia crime family member Salvatore Testa, and according to the State of New Jersey Commission of Investigation's 1986 report on organized crime, constructed the casino using two firms controlled by Nicodemo Scarfo.Although Trump was a federal target in a 1979 bribery investigation, and later questioned in a 1981 racketeering probe, neither investigation resulted in criminal charges. Trump was criticized for omitting mention of that investigation in his New Jersey casino license application, and Johnston alleged that he had persuaded state officials to limit his background investigation.[280] It was also reported by Johnston and other investigative reporters that Trump Tower, Trump Plaza, and other New York City properties were constructed with concrete purchased from S & A Concrete Co., a firm owned by Anthony Salerno, head of the Genovese crime family, and Paul Castellano, head of the Gambino crime family.

According to British investigative journalist John Sweeney, Trump walked out of an interview for the BBC's Panorama series with Sweeney after Trump was asked why he continued to do business with Felix Sater, an ex-convict who identified himself a "senior advisor to Donald Trump" (a claim disputed by Trump's representatives), after Sater's mafia and Russian criminal ties, as well as a 1998 racketeering conviction for a $40 million Mafia-linked stock fraud scheme, were publicly reported in 2007. Sater's fraud victims included Holocaust survivors Ernest and Judit Gottdiener, whose estate later sued Sater and a business partner for failing to pay $7 million in restitution.Sater moved into a Trump Tower office on the same floor as Trump's office in 2010, according to court records and Associated Press interview  "Felix Sater, boy, I have to even think about it", Trump told the AP in December 2015. "I'm not that familiar with him."[283] When previously asked about Sater by The New York Times in December 2007, Trump said that he "didn’t really know him very well”.[285] Sater was born in Russia in 1966 and emigrated to the U.S. with his family at the age of 8, and later developed ties to members of the Bonanno and Genovese crime families.[288] He worked with Trump on at least four projects including Trump SoHo, Trump International Hotel and Residence Phoenix (which failed), Trump International Hotel and Residence Ft. Lauderdale (which collapsed amid allegations of fraud), and an unrealized skyscraper project in Denver which involved Sater traveling with Trump to the city and being interviewed together with Trump by The Rocky Mountain News in 2005. Alan Garten, senior attorney for Trump, said that Sater has "got a lot of contacts" and worked with Trump scouting high-end luxury real estate opportunities, but was never formally employed, and did not close any deals for Trump over the course of a six-month non-contractual working relationship in 2010. "If Mr. Sater was good enough for the government to work with", referring to the cooperation agreement which kept Sater's racketeering conviction sealed from public scrutiny for 14 years, "I see no reason why he wasn't good enough for Mr. Trump". [WIKIPEDIA]
Source: https://en.wikipedia.org/wiki/Donald_Trump
Related: