Don’t ban Donald Trump. Just keep on laughing at him 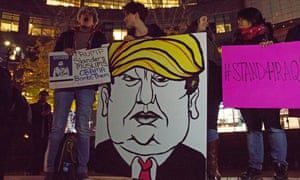 How should we respond to would-be President Trump’s latest outrage? Point a figure and shout Eeeeuuuurrrggghhh!

I have tried very hard to avoid writing about Donald Trump. I was desperate to write about anything else: the floods, or the Tatler Tory, or the fact that a bloke whose job is to hit people has been saying offensive things (making him a sort of reverse Clarkson), or even high street spending, God help me. But it was no good. I couldn’t stop thinking about Trump, couldn’t get his name out of my mind – it was like the head of the herd was calling far far away.

It would probably be better to ignore him. If, at a polite drinks do, a man starts noisily doing a shit in the corner of the room, the dignified response is to avert your gaze. But it takes so much self-restraint. Our inner child wants to stare and cry out: “What’s that man doing? He’s so weird! Eeeeuuuurrrggghhh! I can’t stop looking at him!” That’s how I feel about Donald. I can’t take my eyes off him. I’m guiltily drawn to pictures of him, as if he’s boobs. 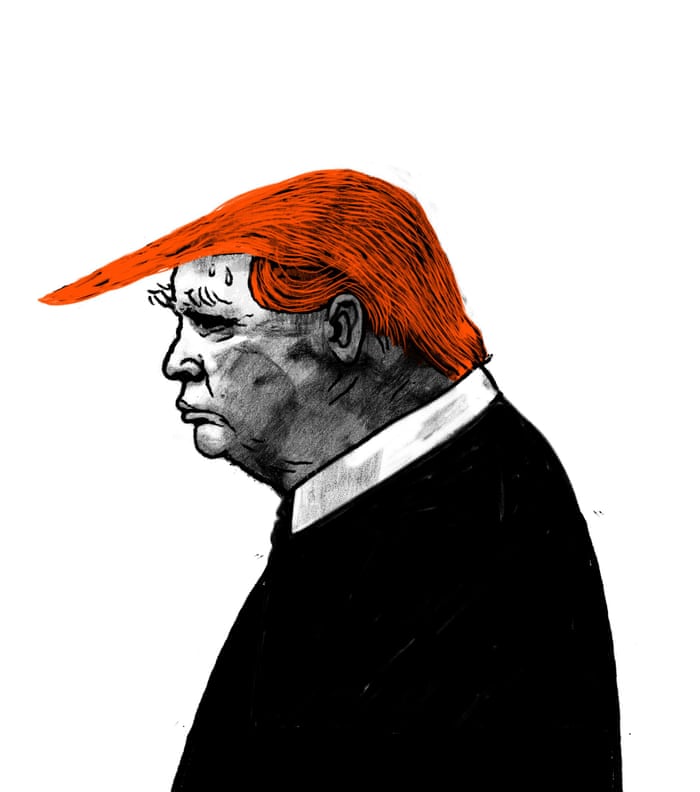 It’s not just his unique look that I’m amazed by, but how he moves, what he says and the way he says it. It’s so fascinating and disgusting, like staring through the glass at the zoo to see a huge hairy spider gradually devour a mouse. He’s a perfectly watchable and villainous entity – the Lord High Emperor of the planet Katie Hopkins came from. As panto season approaches, I long for him to take the stage so I can boo.

What adds infinitely to this repellent allure (a concept which would be self-contradictory in anyone else) is that Trump isn’t trying to play the villain, he’s trying to be popular. And, current evidence suggests, he’s succeeding. When he says that many Mexicans are rapists, that thousands of Arab Americans celebrated the 9/11 attacks or, as last week, that Muslims should be prevented from entering the United States, he’s not trying to publicise a book, stimulate debate or generate internet traffic. He’s saying it because he thinks lots of people will agree.

To most of the American political mainstream, and pretty much all of the British one, this induces a lot of spluttering – not just because Trump’s views seem so despicable but because his success contradicts the current political orthodoxy. Modern politicians, and their surrounding media, and their further surrounding social media, are obsessed with spotting gaffes and transgressions – moments where lines of propriety have been crossed by their opponents – and then exploiting them.

But you can’t do that with Trump. He’s not just a straight-talker, he’s a man who reliably says the things politicians dream their opponents will be caught muttering within range of forgotten radio-mics – except he declaims them on a podium in front of thousands. And reiterates them on TV and Twitter. He’s built a campaign from gaffes alone. It’s like he’s found a way to make an incredibly strong suit of armour entirely out of chinks.

This is infuriating for us all, and naturally makes many people desperate to retaliate. So last week Trump was stripped of his membership of the “GlobalScot business network” and his honorary degree from Aberdeen’s Robert Gordon University; and a petition to parliament was launched, and signed by a quarter of a million within the first day, to ban him from entering the UK.

One man, made objectionable by never being questioned. If you doubt how damaging that can be, just look at his hairdo.
I’m not very keen on these ideas. I dislike the trend for “stripping” the disgraced of the honours bestowed on them when they were in our good books. I think if it turns out you’ve made, say, Hitler an honorary PhD in peace studies, the record ought to stand as a rebuke to your whole honorary doctorate admissions policy. Otherwise it’s like a denial of historical fact: the truth is that, in 2010, Robert Gordon University thought Donald Trump was the bee’s knees and they shouldn’t get to erase that from their annals now it turns out he’s a prick. And obviously we shouldn’t ban him from entering Britain. It’s wrong to ban people from going to places – that’s mainly why we’re so cross with him.

But the biggest problem with these responses is that they seem so outraged and feeble. One can’t help picturing how microscopically, sub-molecularly minuscule a damn Trump will give about them. What do he or his supporters care about the rebukes of foreigners? Foreigners whose cities, by Trump’s own invented account, are “so radicalised the police are afraid for their lives”. He can just make capital out of it: he can say it shows how sick Europe has become that rich and successful winners are excluded and denigrated by an unholy alliance of slavishly politically correct liberals and terrorist sympathisers. He’ll probably break that down into several sentences.

We don’t have to give a damn about him either. He’s just one man, made objectionable by never being questioned. If you doubt how damaging that can be, just look at what it’s done to his hairdo. But his rise poses a question: “How many Americans are stupid or unpleasant enough to vote for him?”

His rhetoric is entirely based on spurious notions of strength, victory and a return to greatness, his specific ideas appeal almost exclusively to people’s least creditable feelings. That’s ticking quite a few boxes on the “Is History Repeating Itself?” form. But will enough Americans fall for it that we need to worry? Our current answer is not a resounding “No!” It’s a slightly interrogatively inflected “Probably not”, which is hardly a ringing endorsement of the health of American civilisation.

A surprise advocate of the petition was Armando Iannucci, though he took quite a nuanced view, calling it “a history-defining moment of active hypocrisy” and, once enough signatures had been collected for parliament to consider a debate, concluding: “I don’t think we should ban anyone for something they’ve said; but it’s really funny it might be him.” And it is funny. Also quite funny was what Boris Johnson said in response to Trump’s claims about urban no-go areas – “The only reason I wouldn’t go to some parts of New York is the real risk of meeting Donald Trump” – and the Twitter TrumpFacts hashtag, which spoofed Britain’s supposed radicalisation with, for example, a picture of a Saracens Head pub sign captioned: “Even England’s famous pubs are controlled by Islamic radicals.”

That’s the strongest way of responding to him: to point at the shitting man and laugh. He can’t dismiss that as liberalism. He’s been a ridiculous figure for years. The most dangerous thing we can do now is stop finding him funny.
By David Mitchell
Original Source: http://www.theguardian.com/commentisfree/2015/dec/13/dont-ban-donald-trump-just-laugh-at-him
Related: